// For Ice-Climbing, CLICK HERE //Our second night in Iceland was spent at Volcano Hotel, a modern little building with beautiful mountains as its backdrop. I chose this hotel because it was a mere 5-10 minute drive to the location of our next activity on Day 3 – a hiking tour of Sólheimajökull Glacier. 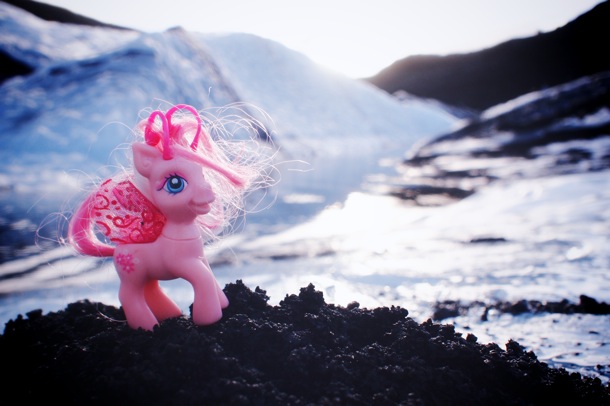 Sólheimajökull is an outlet glacier on Katla, a large, very active volcano in southern Iceland. They say that the last violent eruption from Katla was 95 years ago but that there were probably a couple of eruptions more recently that didn’t manage to break the thick ice cover – these are called subglacial eruptions. The famous Eyjafjallajökull volcano that caused the giant ash cloud in 2010 is smaller than Katla.

What really fascinates me is that Eyjafjallajökull has had three recorded eruptions in the last 1000 years, and each one was followed by a Katla eruption! True to tradition, apparently Katla had a small eruption in 2011, producing a subglacial meltwater flood that destroyed a road bridge along the Ring Road.

Can you tell that volcanoes excite me?
[read about my experience climbing a volcano and watching it erupt]

I booked the five of us onto a 3-4 hour hiking tour of Sólheimajökull Glacier (called Blue Ice) via Arctic Adventures for about ISK22,000 per person. That’s about 125 Euros or 170 USD. Yes, Iceland can be rather pricey! The price includes transfers from Reykjavik, but since we had our own car (thanks SADcars!) and were staying nearby, we didn’t need it. Unfortunately, it doesn’t mean you get to pay less.

I did contemplate doing the hike on Vatnajökull at Skaftafell National Park instead (it’s the largest glacial mass in the whole of Europe), but thought against it as it’s much farther east and didn’t fit in with my winter driving itinerary very well. It was tough trying to do so many things in only 7-8 days! 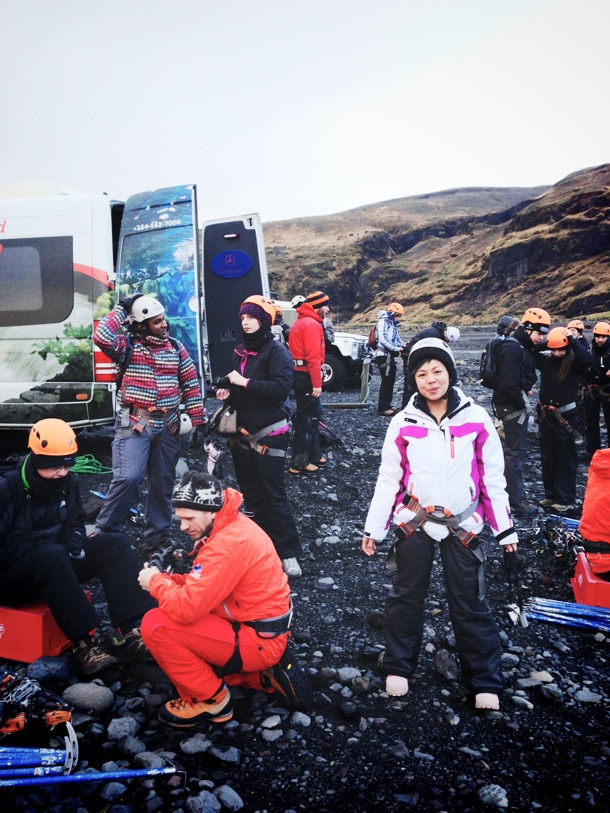 The meeting time was 11.20am at the foot of the glacial tongue. It’s about 5 minutes in through a gravelly path after you turn off the main road (Ring Road). After a delicious breakfast of smoked lamb (hangikjöt), bread, cereal etc, we set off early enough to stop and take some pictures in the barren-land beauty. But too bad it was so cloudy that morning that most of the photos turned out rubbish!

I actually have a video of the drive (before turning off the main road):

We ended up being the first to arrive at the meeting point, but within minutes of waiting, other participants started turning up and so did our guide, Óskar (seen in orange above).

Each person was provided with a harness, a helmet, crampons, and an ice pick. The crampons are fitted to your shoes on the ground before the hike begins, from which time you’ll have to carry them with your hands until you reach the ice. 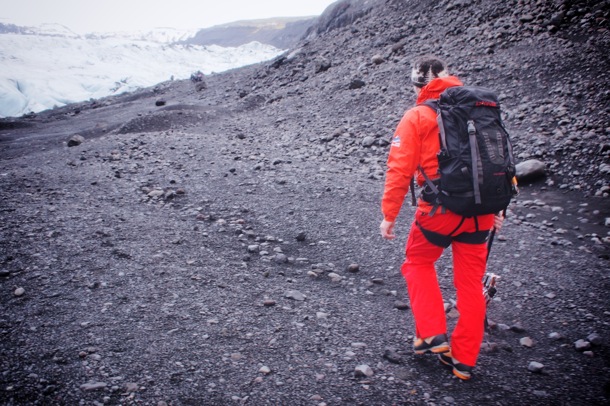 I was already having the time of my life just holding that ice pick. I’d never held one before. 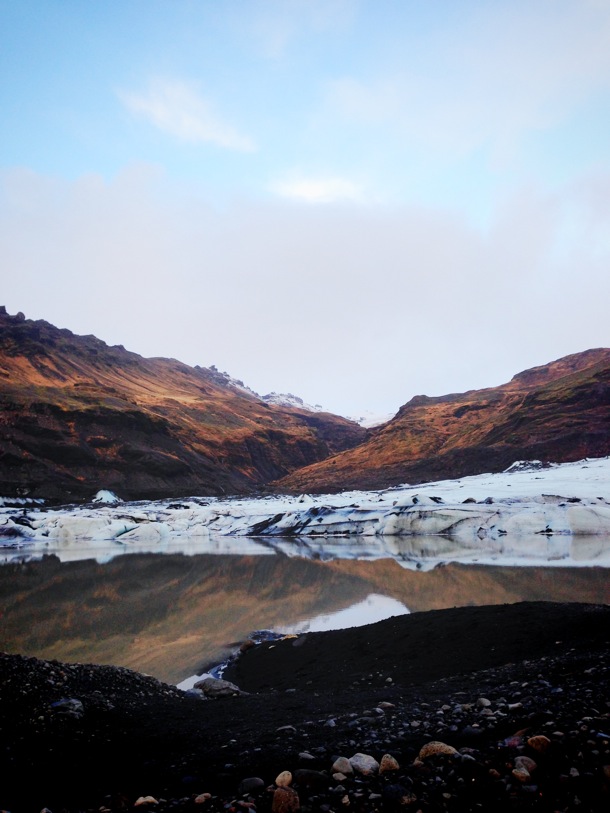 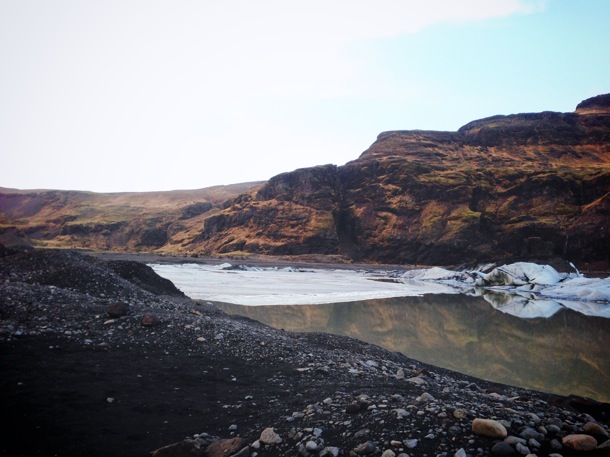 ^^ in the far distance beyond the white in this photo is where our car was parked, a.k.a the starting point. The water you see is a glacial lake formed by the retreating ice due to climate change.

Before we reached the ice, Óskar had everyone stop to put on their crampons, following his instructions. I remember it started to RAIN as we sat down but instead of dampening my spirits, it made me even more excited because I could SMELL the adventure! 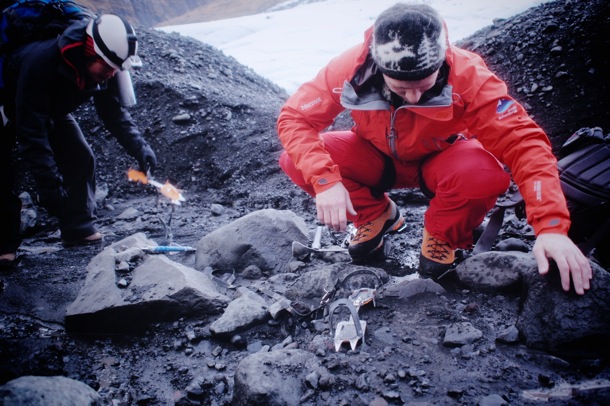 My backpack was drenched and I had to stuff my camera into my jacket. But I snuck a photo anyhow.

We were given advice on how to walk confidently with the crampons and how to put the ice pick down without it slipping and sliding away. I thought it was really fun to stamp your foot down to get a good grip with each step.

Once I got used to it, I sped ahead of the group and trailed Óskar. I like to be in front. ;p 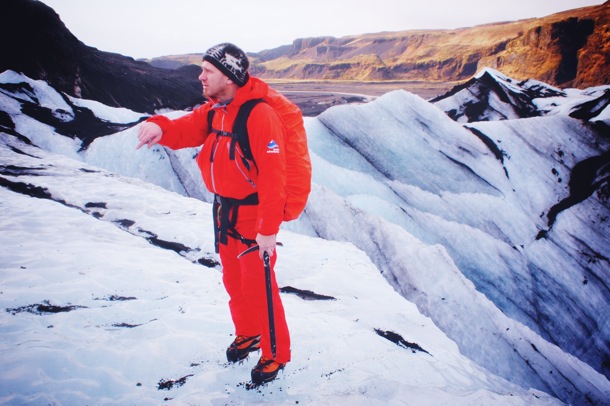 Óskar gave us some interesting pieces of information about the glacier – how it’s formed, the surrounding volcanoes, etc.

In the video below, he talks about British school children coming to Iceland and doing all sorts of excursions.

Yes I admit.. I wasn’t paying attention for a while >.< 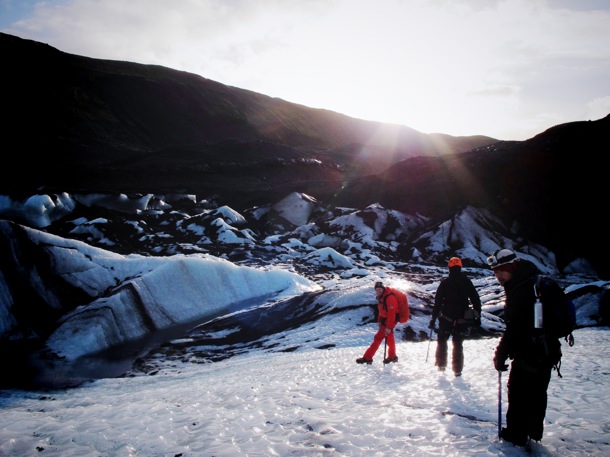 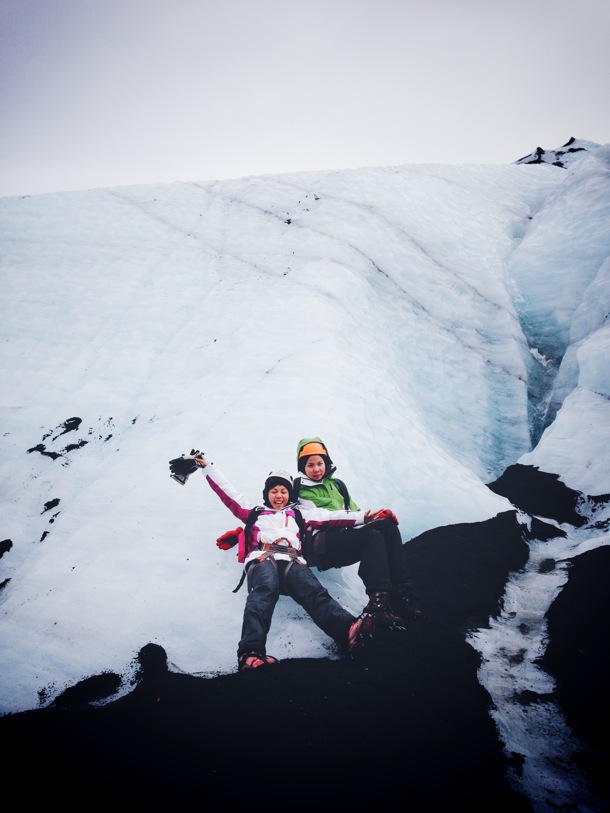 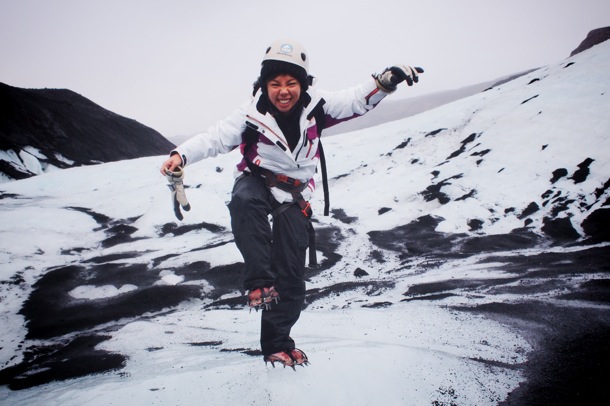 I often had one glove off…. so I could use my iPhone to snap some pics. HMM. 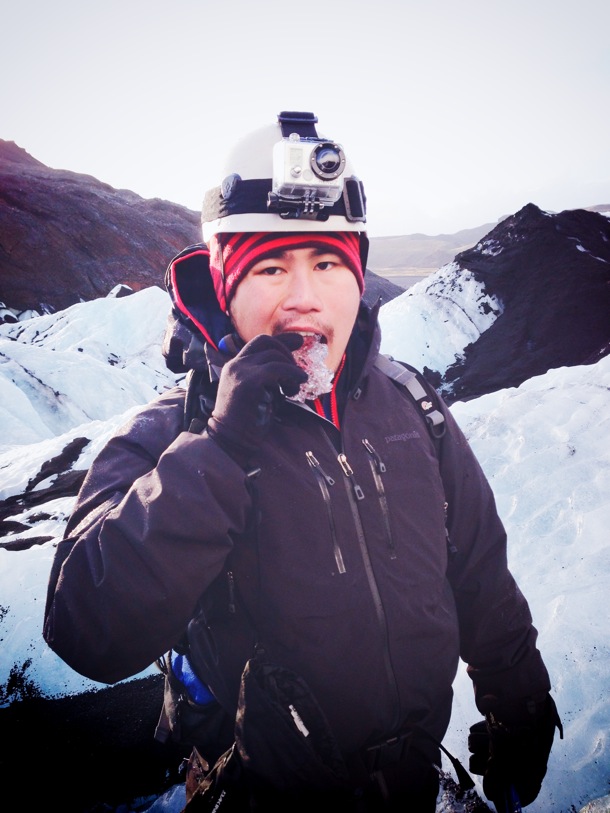 Óskar led us to a small stream of glacial water flowing through the ice. We were encouraged to lean in and have a taste.. which of COURSE I did (and enjoyed). Jason did one better and ice-picked a piece of ice and crunched away.

Apparently the ‘blue ice’ taste the best since they’re more pure in the sense that they have no air bubbles trapped inside.

Now I’ll let the pictures do the talking: 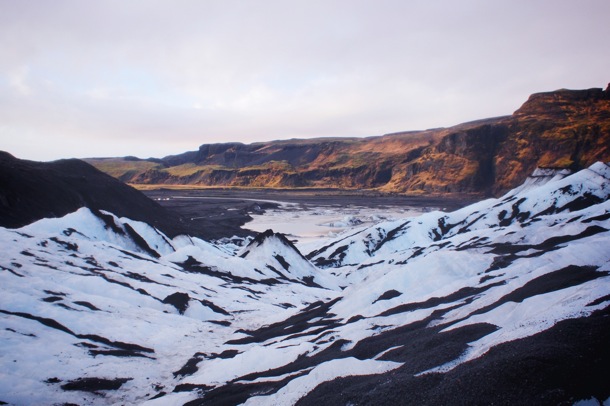 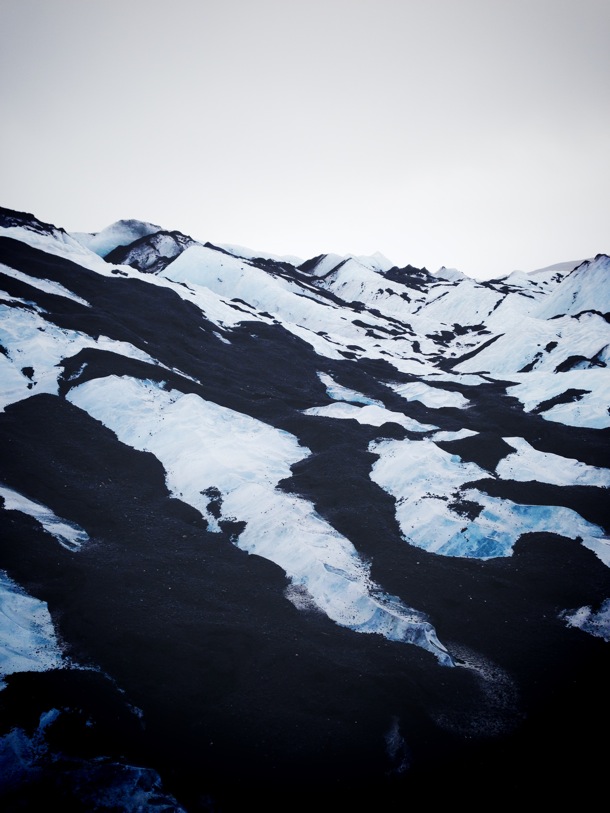 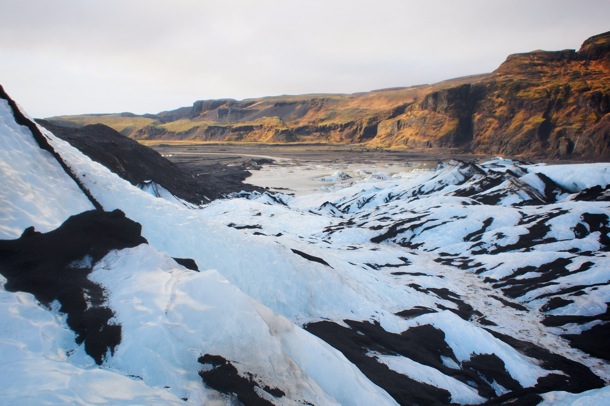 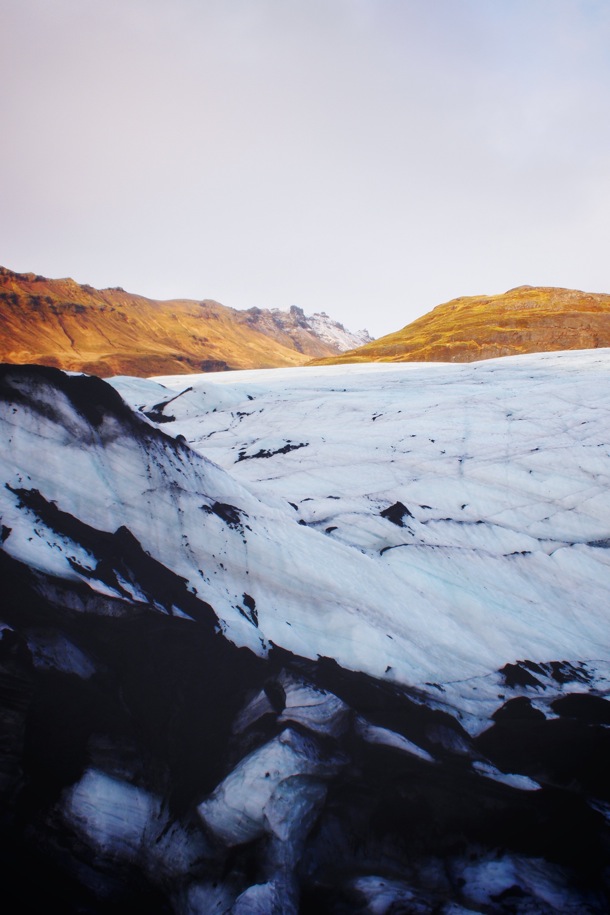 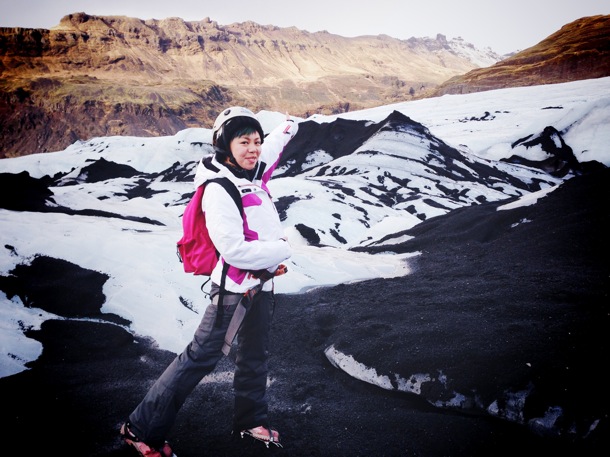 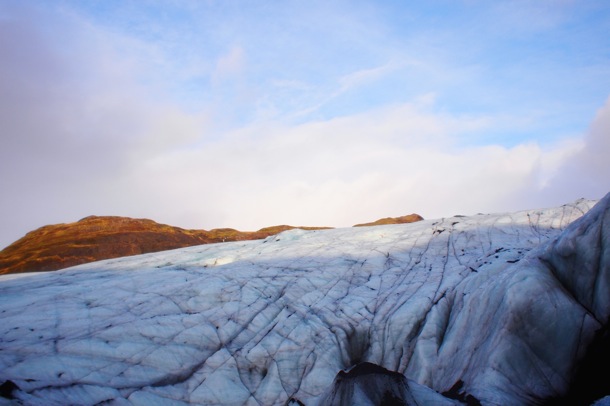 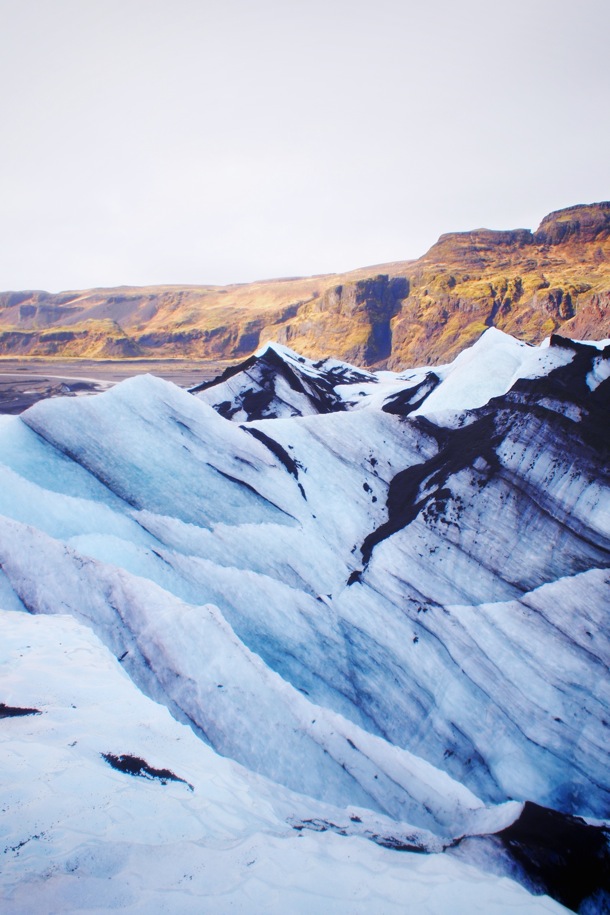 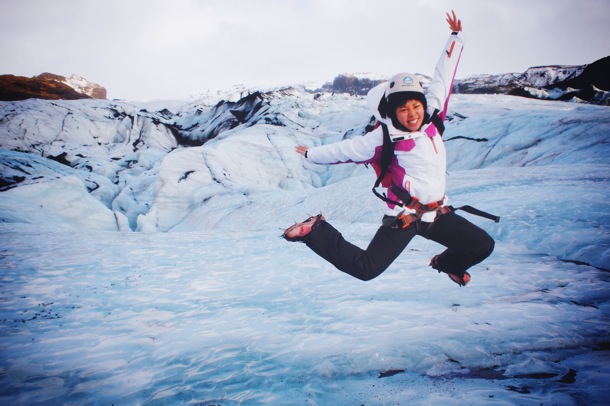 Yes I HAD to do a jump when walking on a glacier with crampons on! 😉 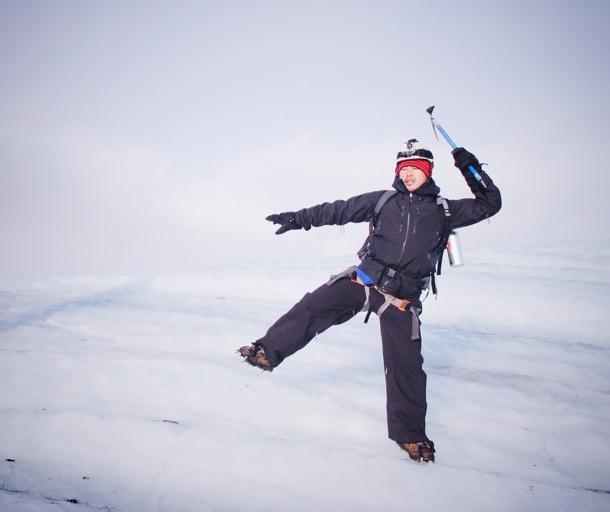 I love this photo of Jason being a goon. 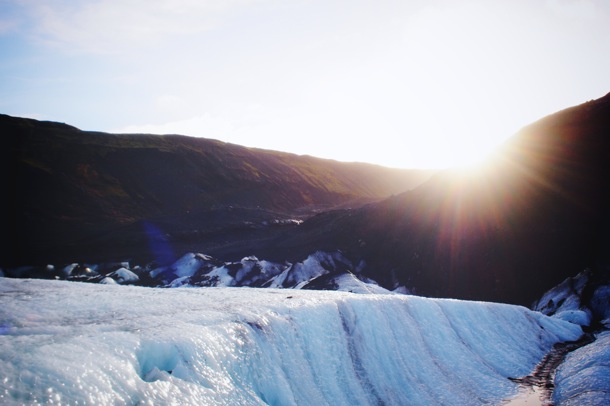 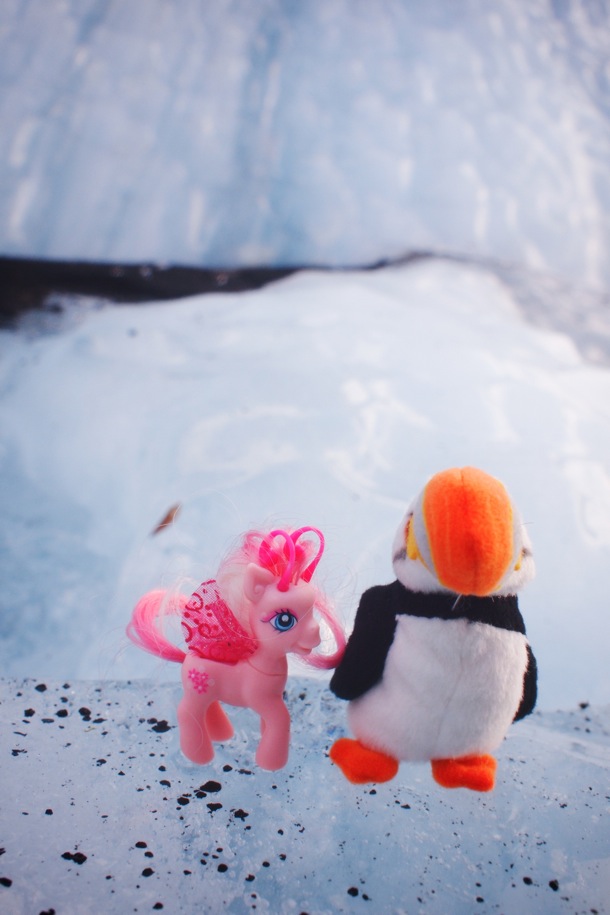 ^^My flutterpony and Linda’s Icelandic Puffin (she had bought it at the tourist centre in Geysir).

I loved the sound of the metal cleats digging into the ice with each step I took. This was my second time visiting a glacier, the first being the Pasterze Glacier in Austria, but I’d never got to use crampons before. I loved running on the ice with them! It was especially fun when the terrain was uneven or when you had to cross over crevasses.

NEXT UP: More Sólheimajökull – Ice Climbing and a Double Rainbow

Oh man. You seriously go on the most epic adventures – not sure if I will ever get to climb a glacier! Love that you do jumping pics even in the most snowy and icy conditions, bravo!!

Wooo I can reply to comments now! thanks winster xx