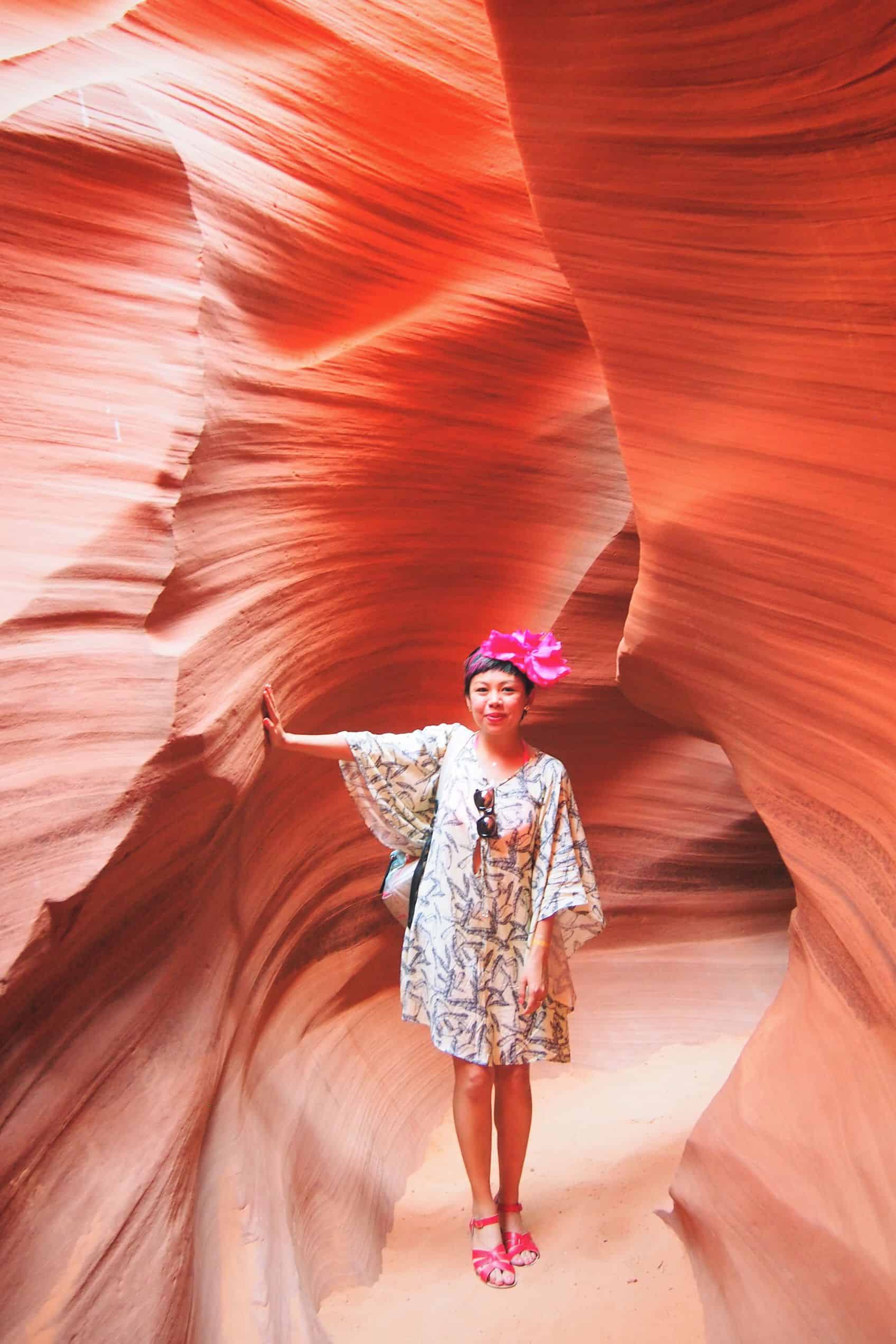 Joyce and I had the opportunity to do a road trip through Utah and Arizona in June after attending Electric Daisy Carnival in Vegas – and all we had to pay for was car hire (a convertible of course). We do lead such charmed lives; it all still seems surreal!

One of the highlights of the trip was our visit to Antelope Canyon during our stay in Page (I LOVED Page by the way), which I’d never really even heard about until I did some research on what to see in Arizona (although I knew I had seen pictures of it before). So of course I wasn’t aware that you had to choose between UPPER Antelope Canyon and LOWER Antelope Canyon, and argh it was so hard to decide..

I learnt that Upper was where the most dramatic photos are captured – these were the ones you would’ve seen on the web when searching for ‘Antelope Canyon’.. or in National Geographic magazines. But the downside was that because it’s so popular it’s always full of people. It’s also rather more expensive. Lower Antelope Canyon was less popular and slightly less accessible than Upper (only because you’d have to climb down some steep ladders to get down into the canyon at the beginning).

After some careful consideration, we decided on Lower because we had some grand plans for what kind of photos we wanted to take down there (you’ll see..) and we much preferred to have a bit more space instead of get stuck in a crowd. Plus the money we’ll save could go to more food 🙂

As of June 2015, when we visited, there seemed to be only two obviously visible operators running tours to Lower Antelope Canyon. We chose Ken’s Tours. There was no need to book even though it was peak season (another reason we preferred Lower to Upper). 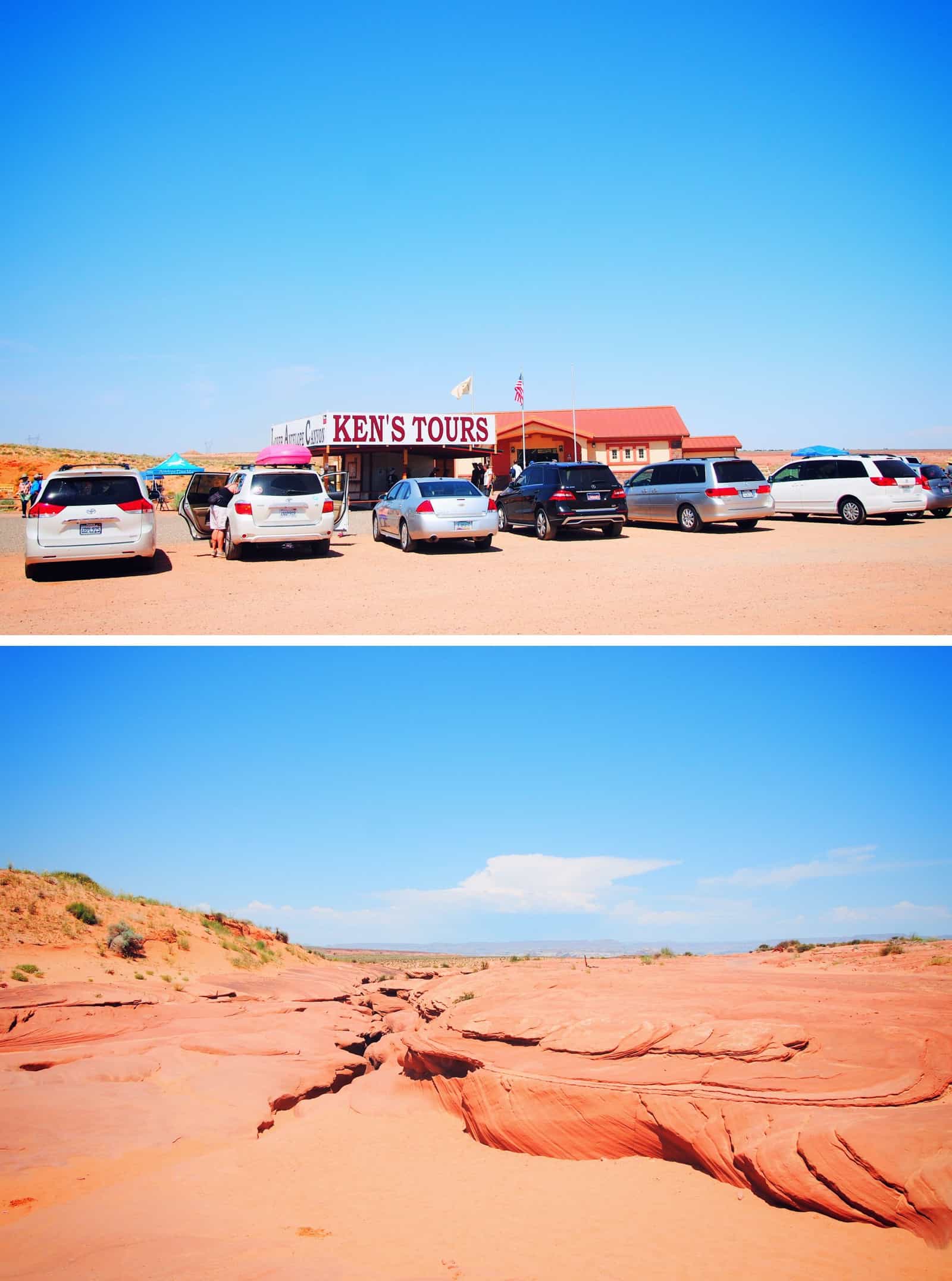 It cost $28 per person including the mandatory Navajo Park Permit of $8. By the way, you’re not allowed to enter on your own, so you’d have to sign up for one of these guided tours.

We went for a 10.50am tour. If you’ve looked online, you’ll know that there’s a huge discussion/debate about what is the best time to go for the ‘best light’. We weren’t super fussed but I learnt that between 10am and 2pm is meant to be ‘ideal’, although the tour guides will tell you that it’s beautiful no matter what time of day it is (not untrue!).

We had about 20 or so people in our group, which to me was not small, so imagine what being at Upper Antelope Canyon would’ve been like! Anyway, once we descended into the ground, our eyes enjoyed a big feast. It was stunning.. 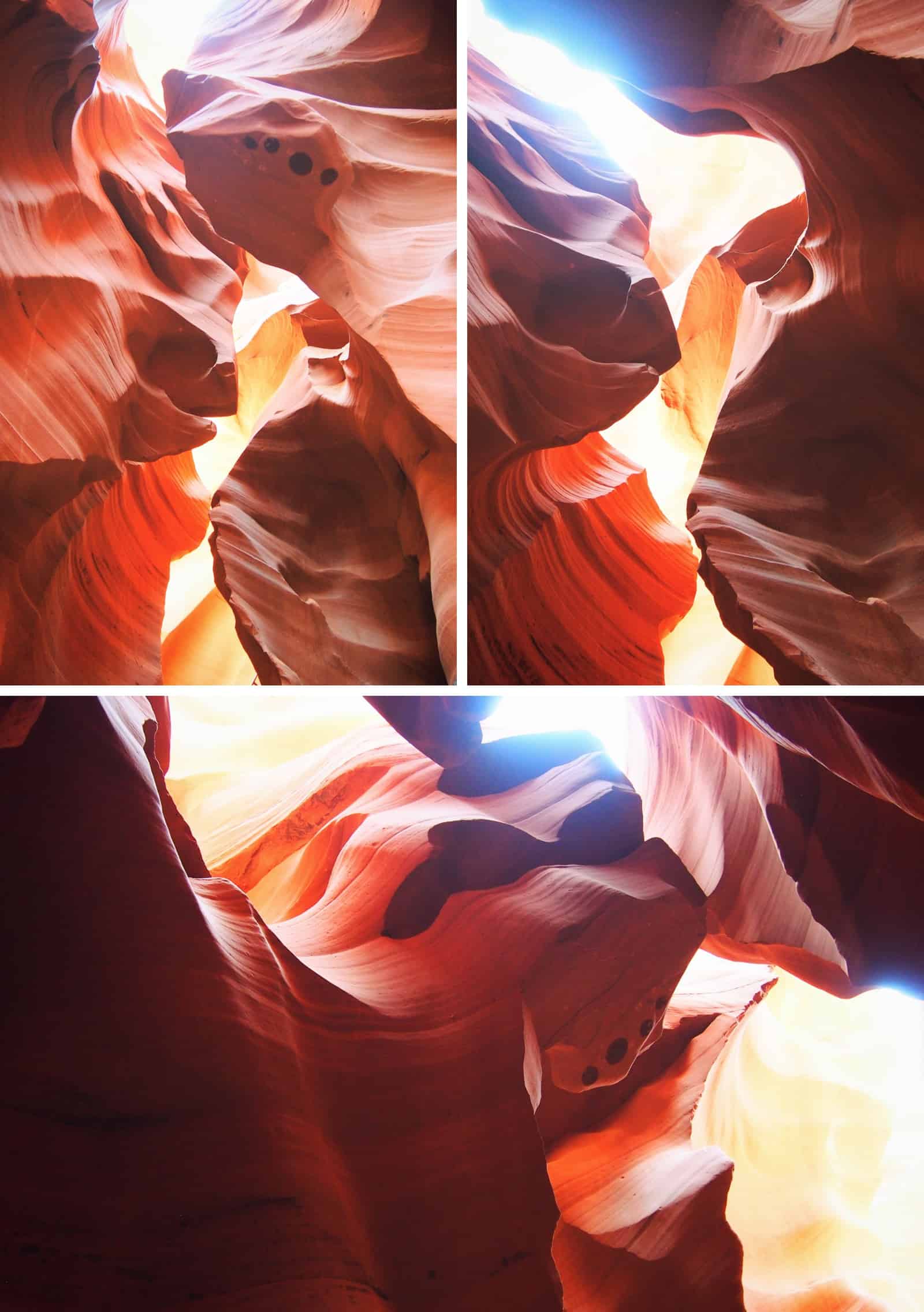 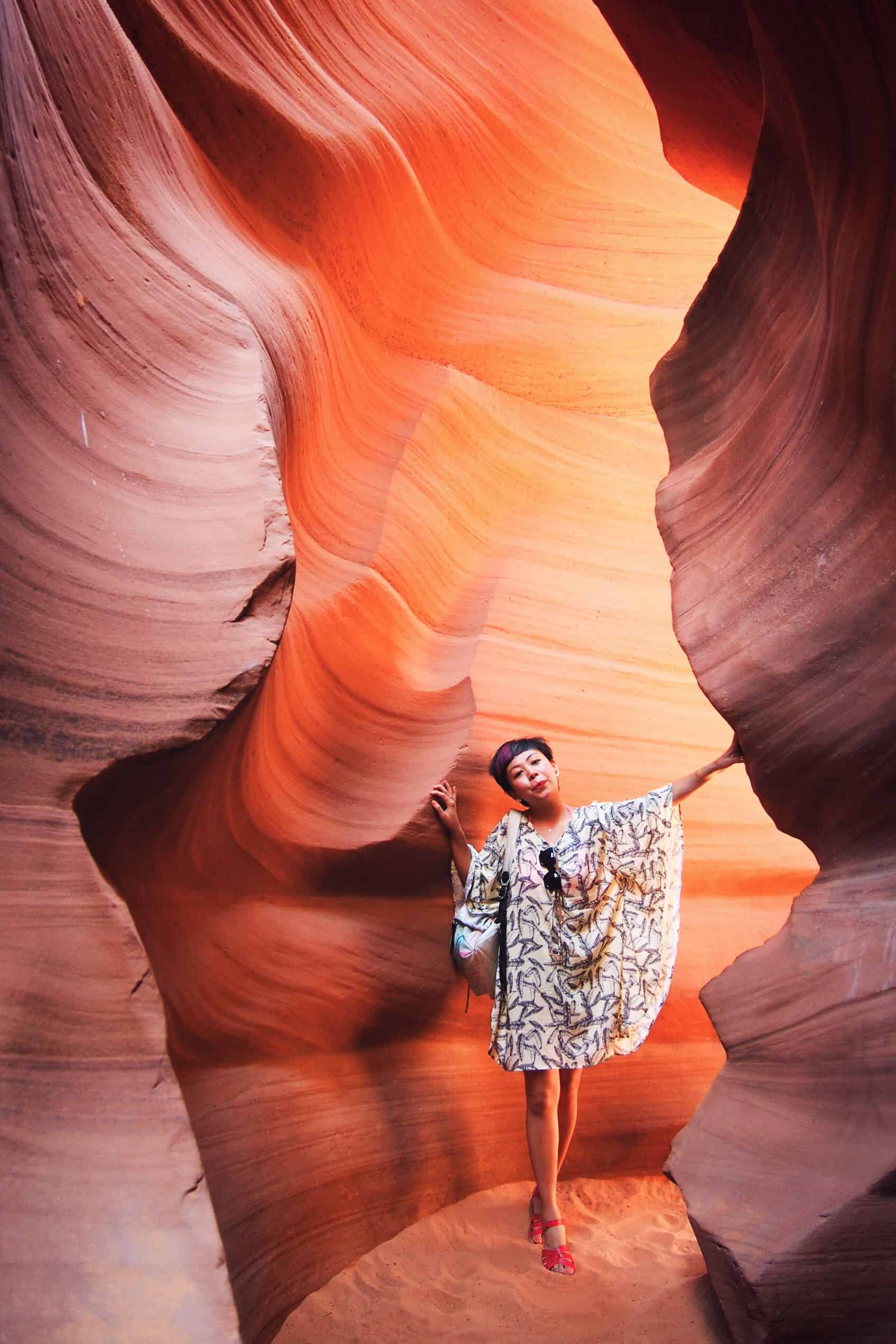 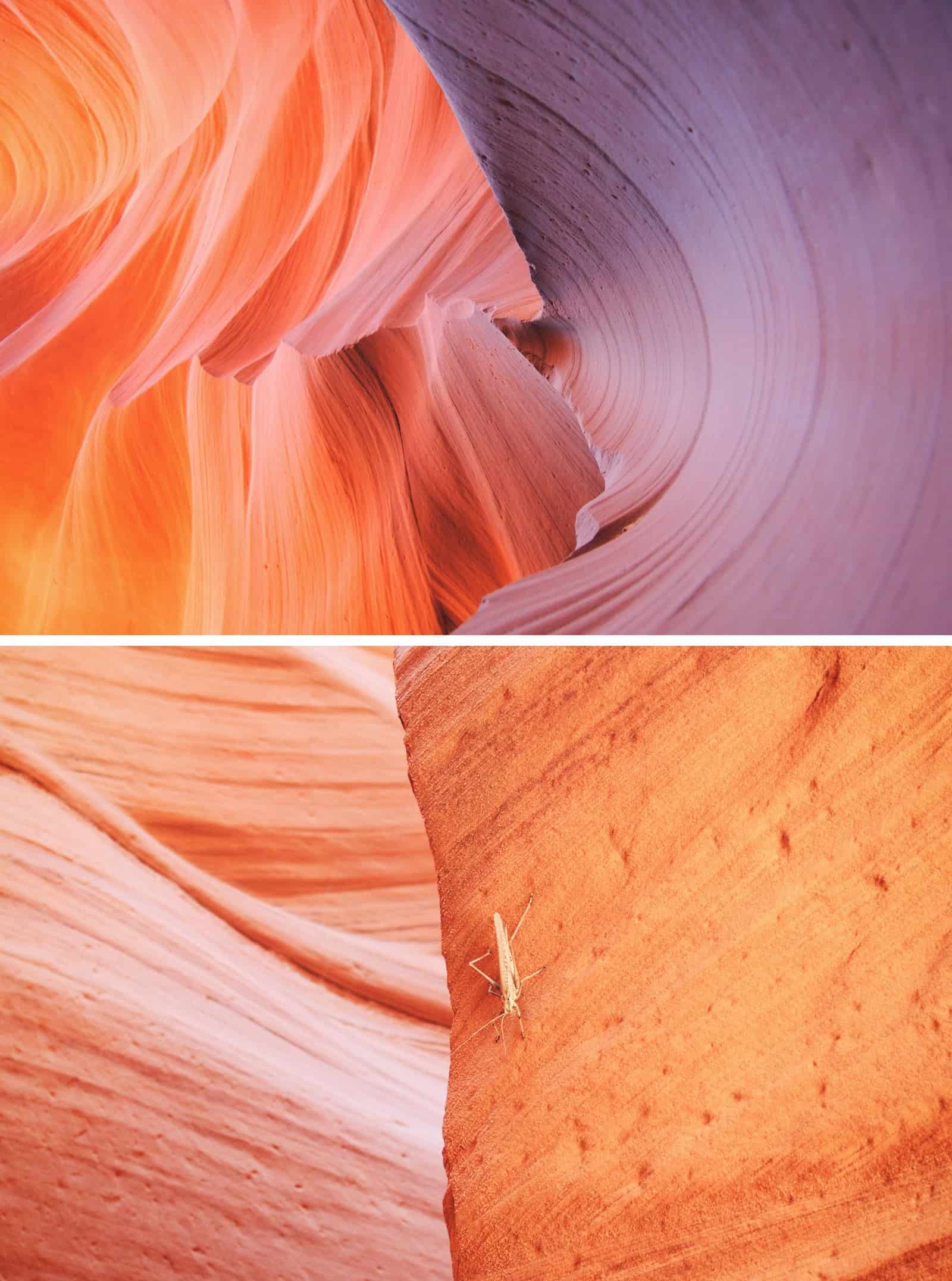 Our guide, Buddy, explained how the canyons were formed and pointed out some interesting angles and perspectives for photography.

We tried to wear our animal masks (courtesy of Joyce) as often as we could.. possibly annoying some of the group but I’m pretty sure amusing most of them! We even flapped around and made chicken sounds. We thought.. everyone’s gonna have the SAME PICTURE, so why  not make ours a bit different?

I love our photos and I love the idea of us prancing around in rubber animal masks and floral headbands in a beautiful, well-known tourist attraction (not a novel situation though – examples here and here).

The tour lasted less than 1.5 hours from start to finish, which means we were in the canyon for about 45 minutes, I think. I do wish we could’ve stayed longer for more pictures, but there were always other tour groups coming up behind us and so our stops were time-limited. I did always feel hurried despite Buddy being super accommodating and patient with us (he really was great).

Overall, I LOVED Antelope Canyon and if you’re ever driving through Arizona and stopping by Page, definitely spare a couple of hours to visit.

More info about the tour here.

Hi yishyene!! Antelope Canyon looks so Beautiful through your vision l!! The colors and shapes …awesome work!! It looks like you had a great time! I Hope to visit this place in the future! Incredible! Good to see you post something new here… You make me travel around just with your photos!

Super cool photos banana!!! I’m dreaming of going there! I love those masks, they fit in any ocasion 😉

You need to buy one of those masks! haha

Omg, I can’t really even begin to put into words how beautiful these photos are. Each shot is like a work of art, like some really cool colourful sculpture. They are SO desktop worthy. I would love to visit here one day. I love the dreamy surreal caves and then you two with those masks. They’re hilariously brilliant and awesome!

Aw you are too kind.. you would love it there and never want to leave! It’s such photogenic place! x

Yishyene you always take such fantastic pictures and make everything in the world more colorful and fun. I have been to Arizona but never to Page. It will go on the list for next time I’m in Arizona. The canyon is incredible.

What a gorgeous location! My sister and I took a road trip through Zion National Park and Bryce Canyon this summer, with similar beautiful landscape. Looks like you had a blast!
Cheers,

Ah lucky you! I’m hoping to do the same trip again with my sister as well – she lives in Iowa! 🙂

This looks so magical. I’ve always wanted to go. Love the rock shape and the lighting!

Did not expect the masks. Nice job.

Hahah I couldn’t stop laughing when I saw your masks. Definitely a great way to stand out from the rest 🙂

I always wondered what the differences were between Upper and Lower Canyon so glad you mentioned it here. I would have definitely picked lower as well – just to avoid the crowd. Such amazing photos btw. 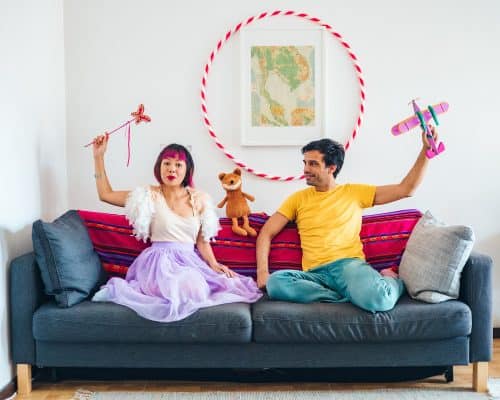 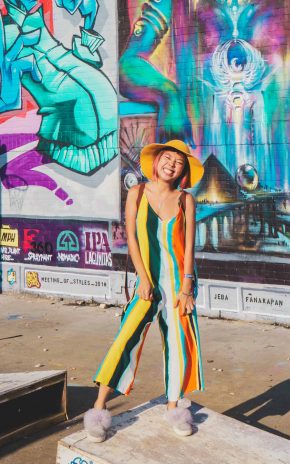