This is a continuation of a post I previously wrote about hiking on the Sólheimajökull glacial tongue in South Iceland.Halfway through the hike, our guide Óskar started looking for a a flat ice wall so we could all have a go at ice climbing. I was really excited (of course.. as with everything).Once we found a suitable wall, he climbed up to the top.. sort of like Spiderman.. to lay down the hooks and ropes or whatever else it is you need for this sort of activity. After watching him move to gracefully and quickly, I was certain that this was going to be super easy! 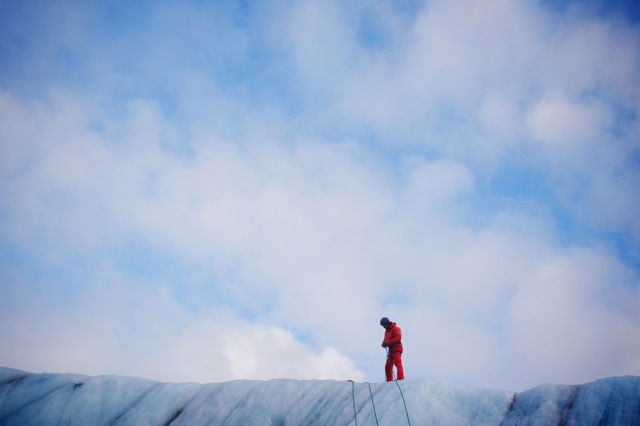 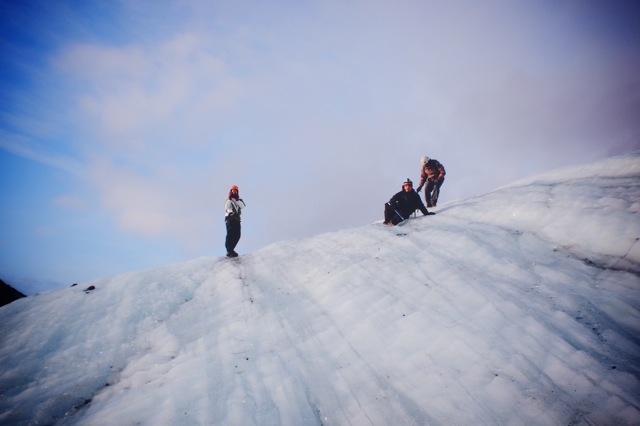 While he was up there, we were trying to descend a steep slope to meet him at the bottom of the wall. That was quite challenging and a bit scary. 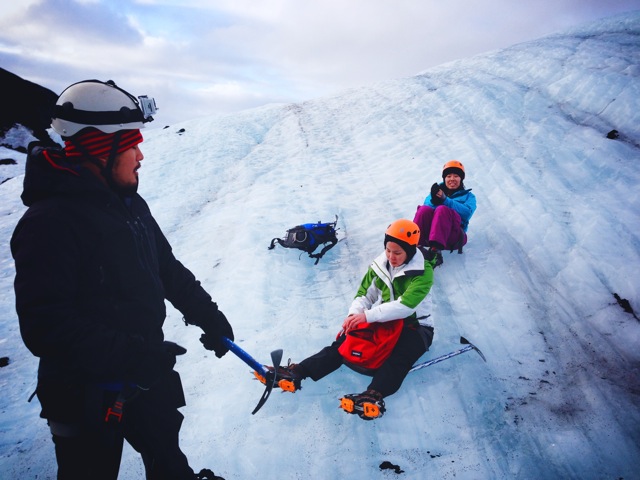 Jayna (in purple/blue) decided she would try to move down slowly on her bum. 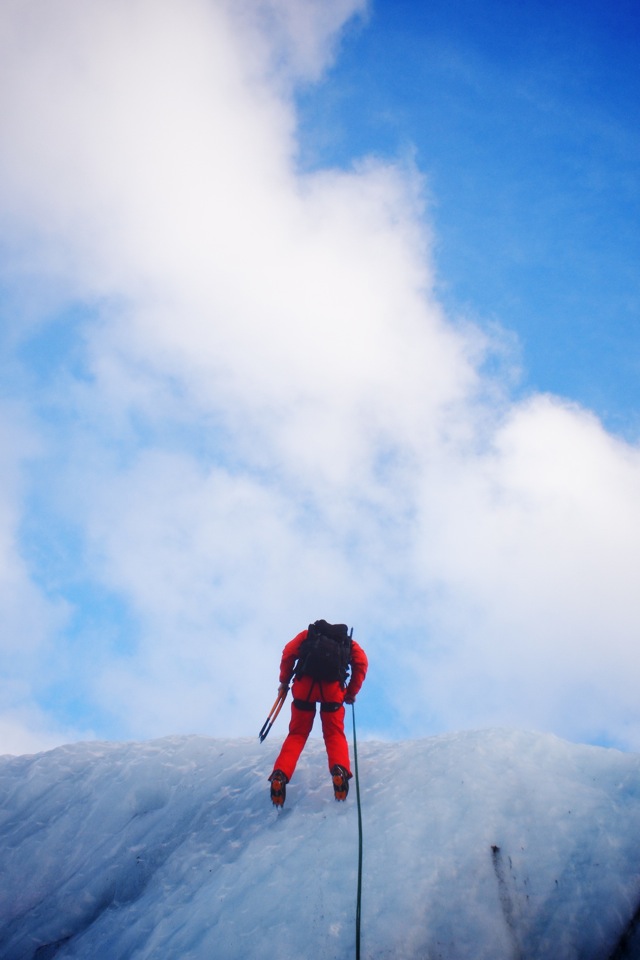 Meanwhile, Óskar had finished prepping and was coming down the wall. 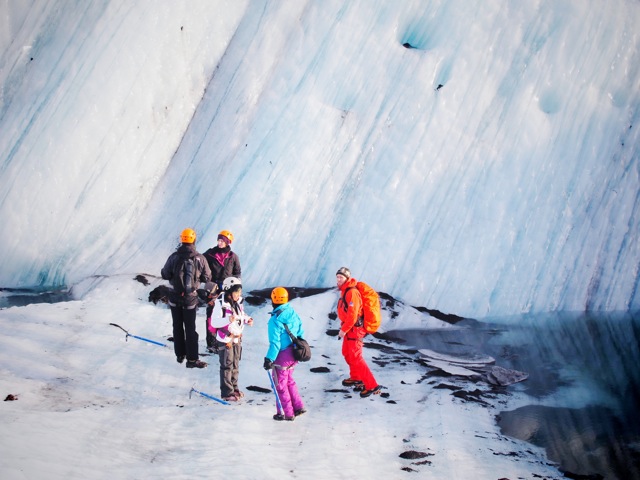 I’m not sure what we were doing here, but I’m guessing we were talking about.. the wall. Haha! 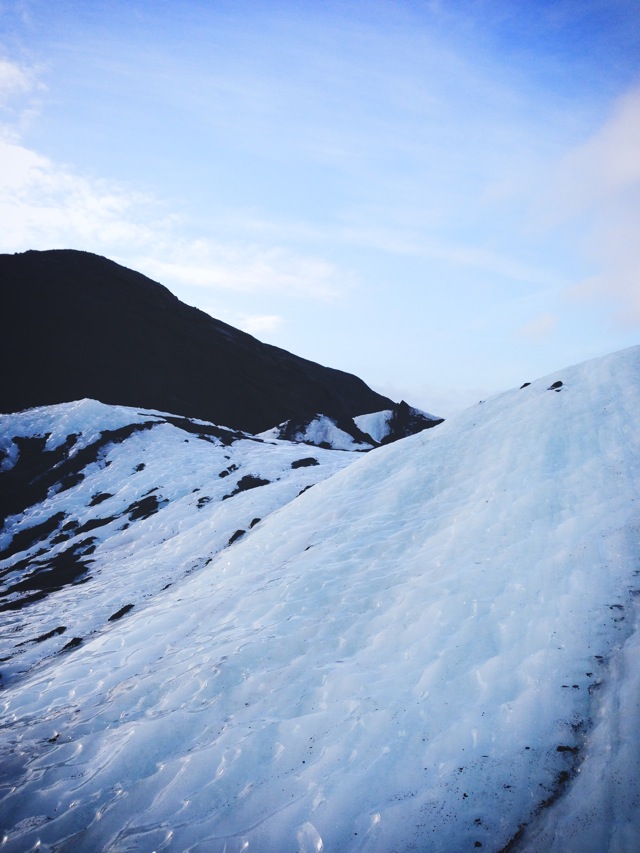 Another shot of the steep slope we had to walk on earlier. 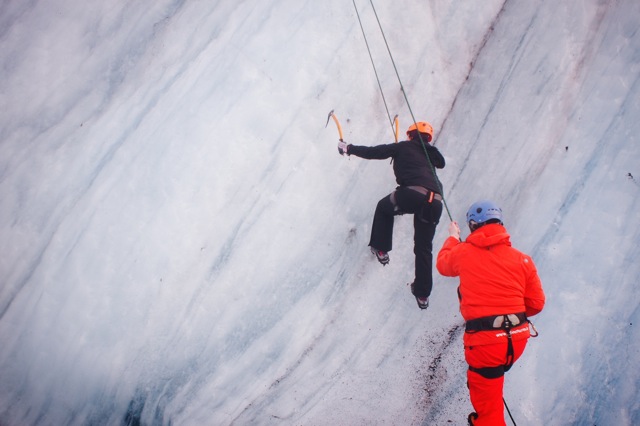 One of the other girls in our hiking group went first. I think she only made if a third of the way up before giving up and asking to be lowered back to the ground.

I decided that I would go second, so I could show her how it’s done. I’d never ice-climbed before but I mean.. how hard can it be really. It’s just kicking into ice and like.. walking up! 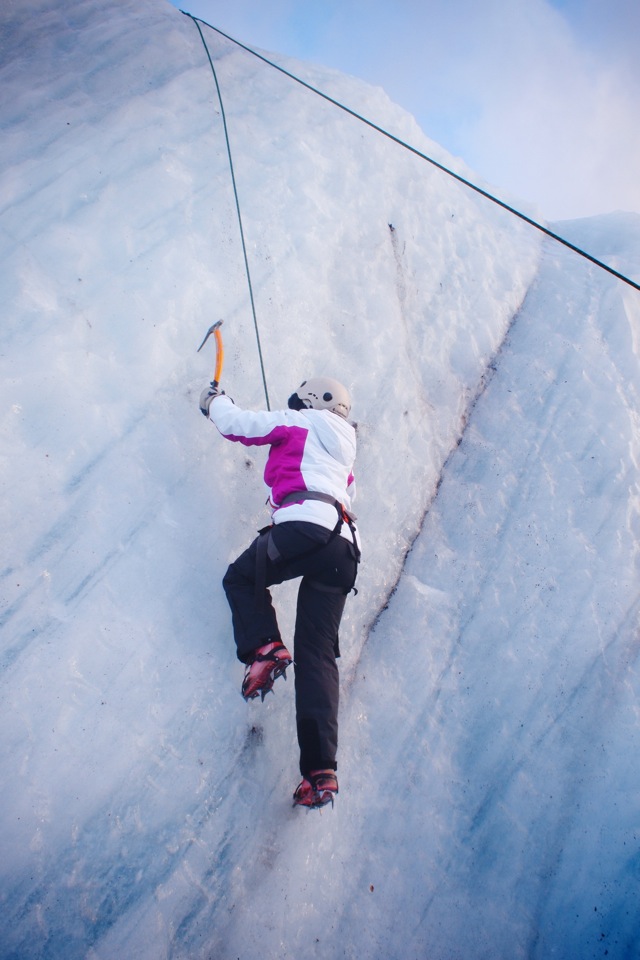 It turns out, it was BLOODY FREAKING HARD. After a (short) while, my arms were all wobbly.

Those ice picks are HEAVY! You should’ve seen me pathetically knocking them against the ice trying to get a grip. 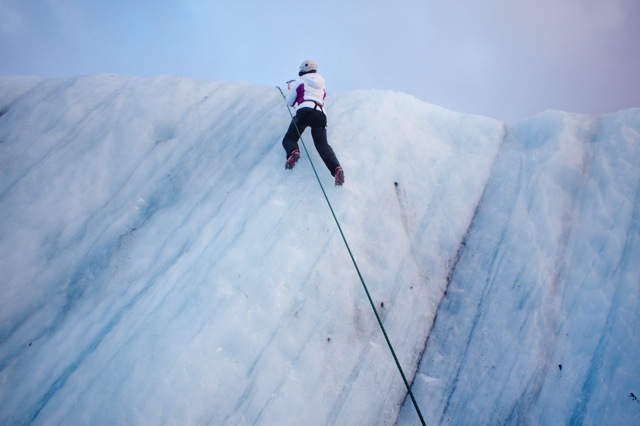 But.. no matter. I made it to the top in the end!! Only two people in our group – Jason and I – managed to ice-climb to the top. I was proud of myself! Although.. there was never any doubt in my mind that I would make it ;p

My toes were completely battered and bruised after that. You need so much force to get the spikes to really dig in so they can hold your weight!  It was almost like torture.

After this experience, I put ‘ice-climbing’ into my mental list of ‘things only super strong and talented people do’. 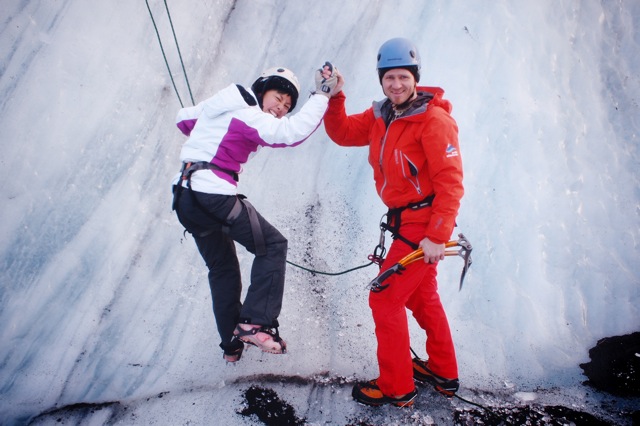 I hope Óskar was proud of me… haha

He was such a great guide.. really friendly, informative, and most importantly.. FUNNY 😉 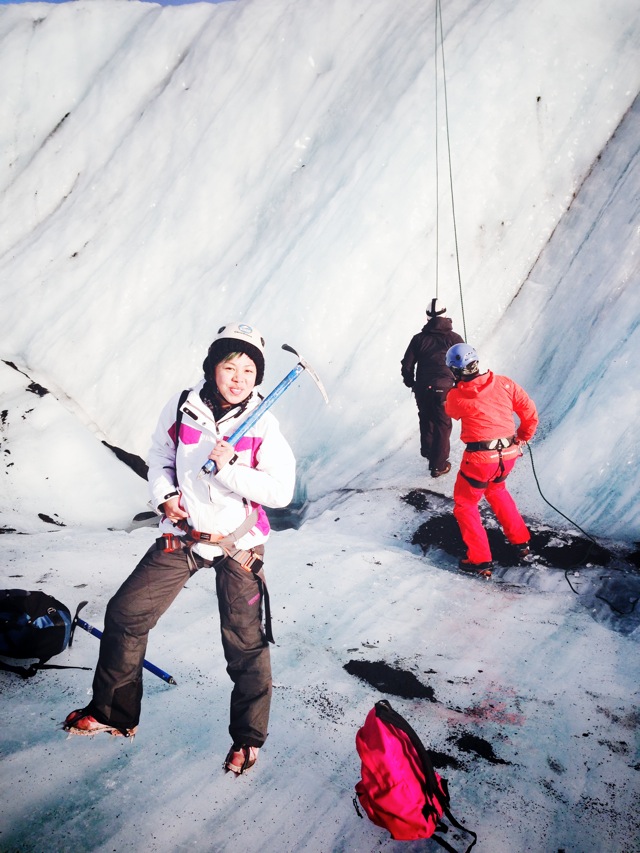 I’m going to overwhelm you with (beautiful) photos I took next to the ice wall now: 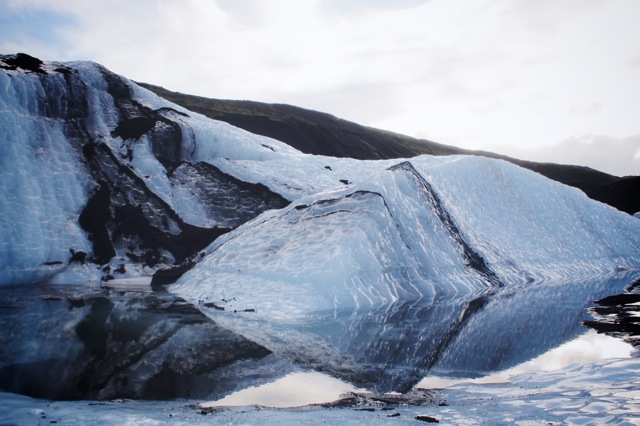 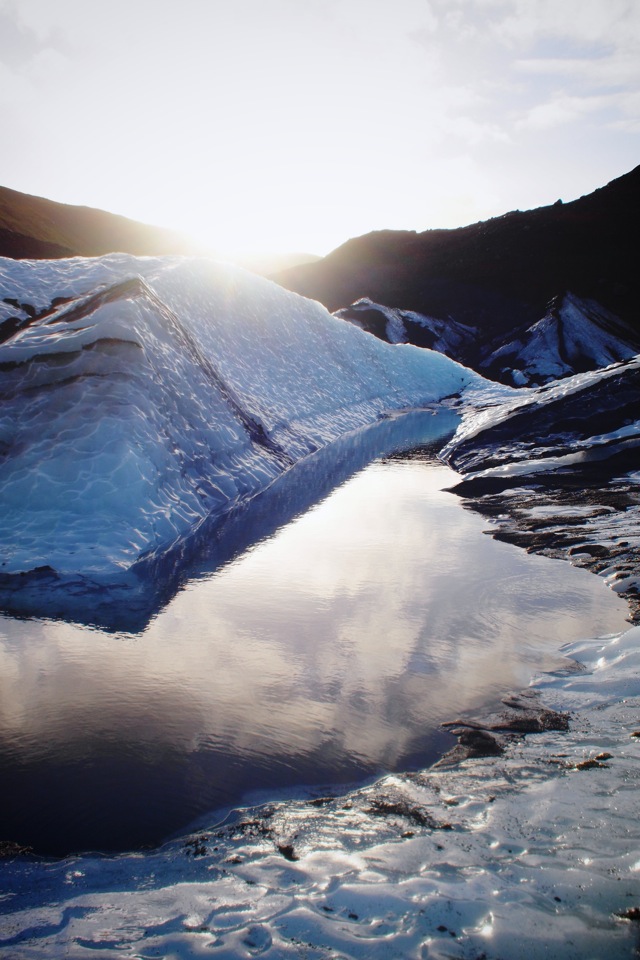 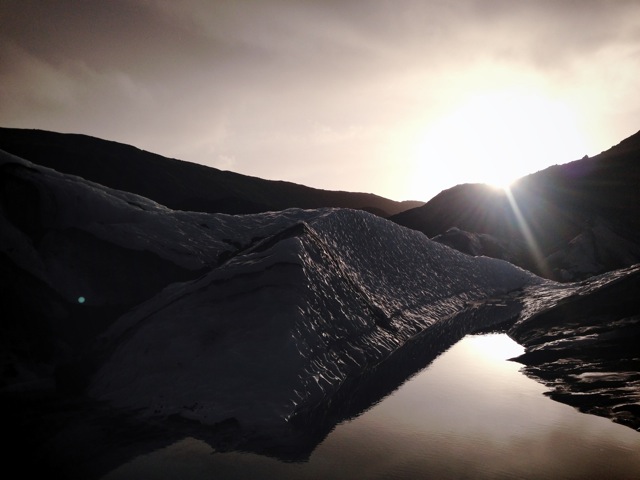 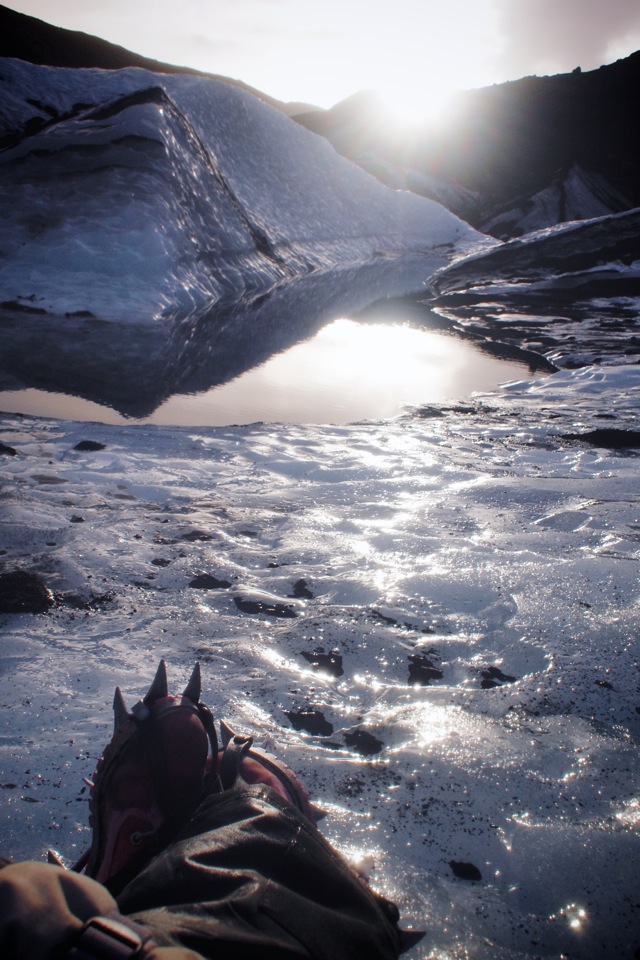 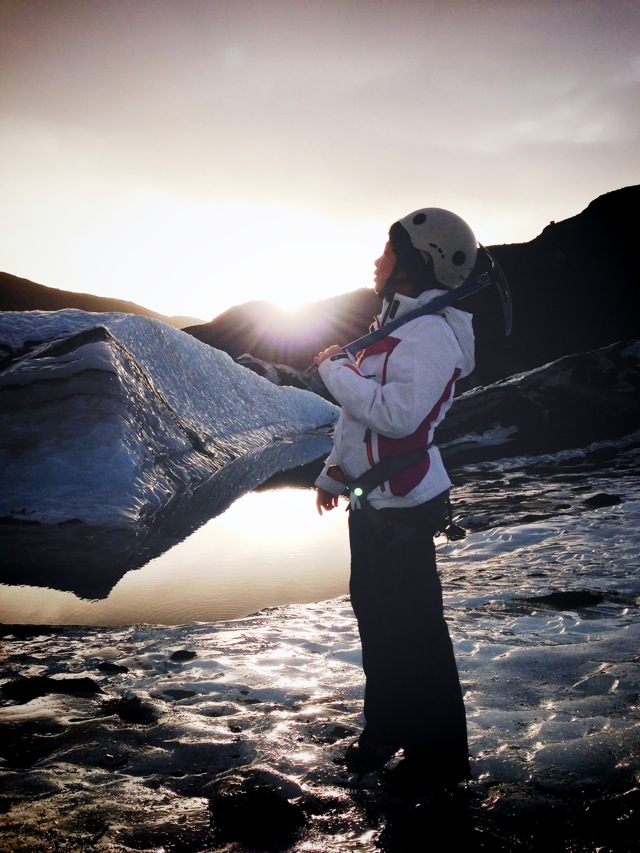 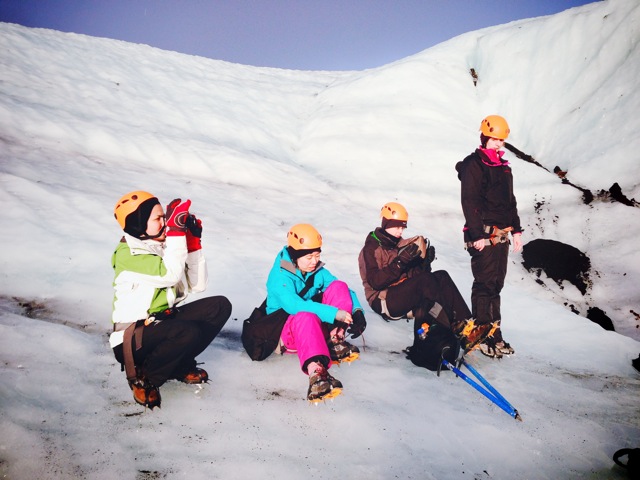 Everyone was knackered after their own attempts at ice climbing.. they were also all in awe of the beautiful sunset upon us and were all geekily snapping a bazillion photos per second.. 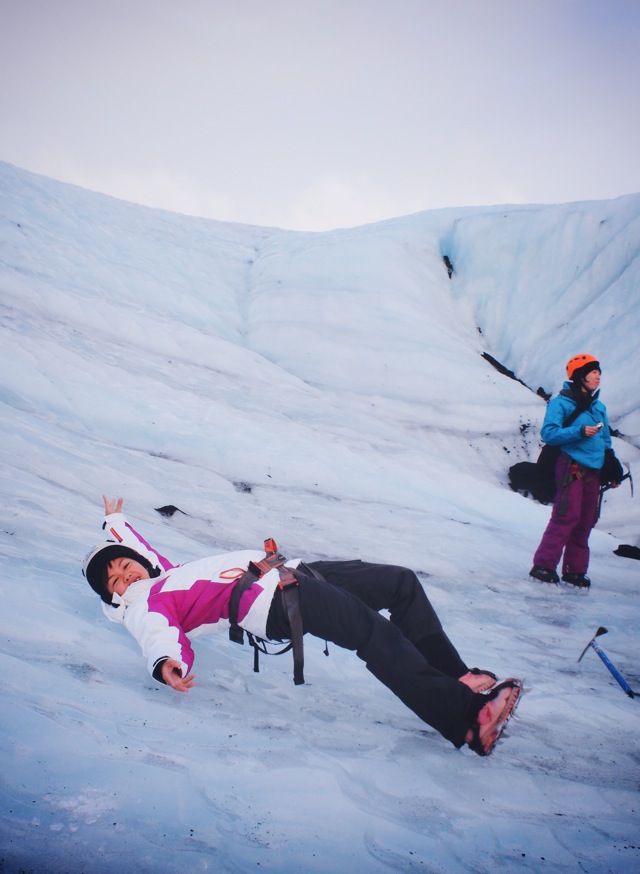 How fortunate were we that day, because not only did the sun show itself after the rain, but nature produced for us a DOUBLE RAINBOW! It was difficult to capture on my camera.. but if you look carefully you can spot it! 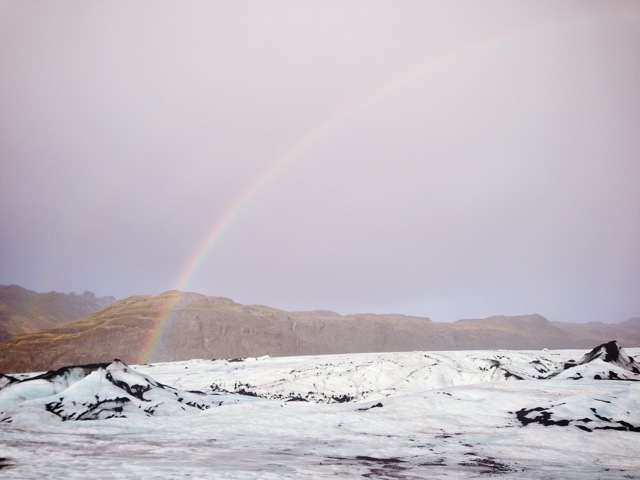 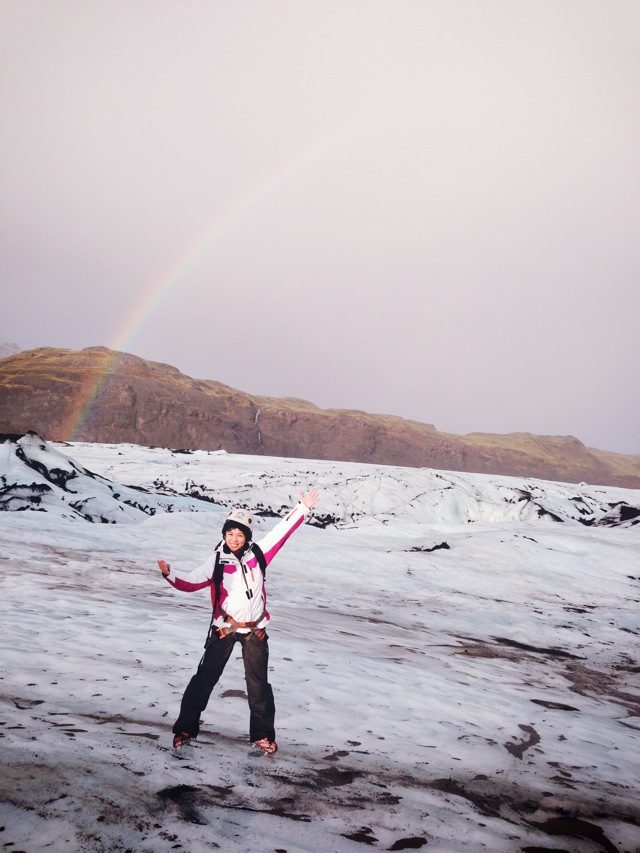 I was really happy 🙂

Rainbows seemed to be a common sight in Iceland.. ! 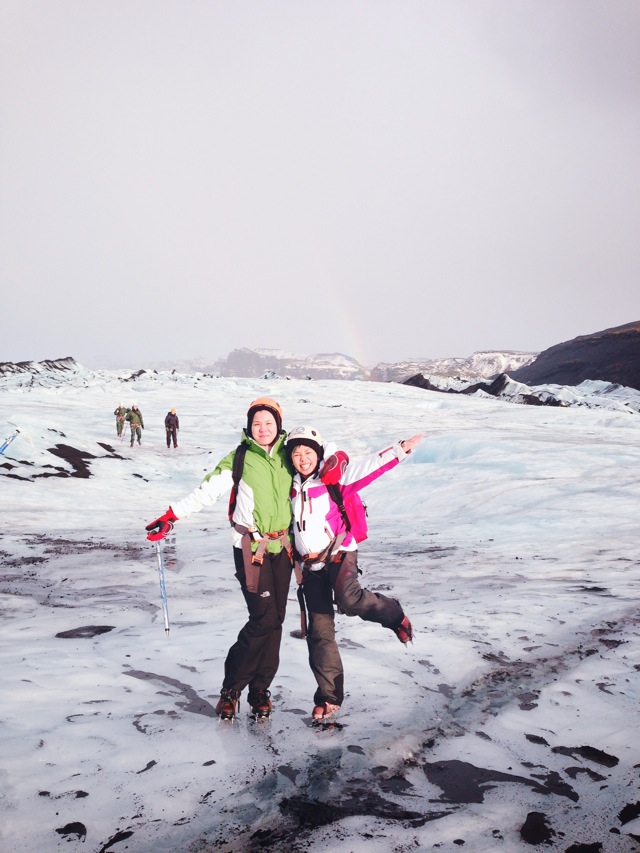 Zorro and I.. we were left to wander about for a bit on a large plain of glaciery ice. I felt like my parents had left me alone in a playground. So much fun! I kept breathing in deeply so as to try to ‘take in the SMELL’ of the day. 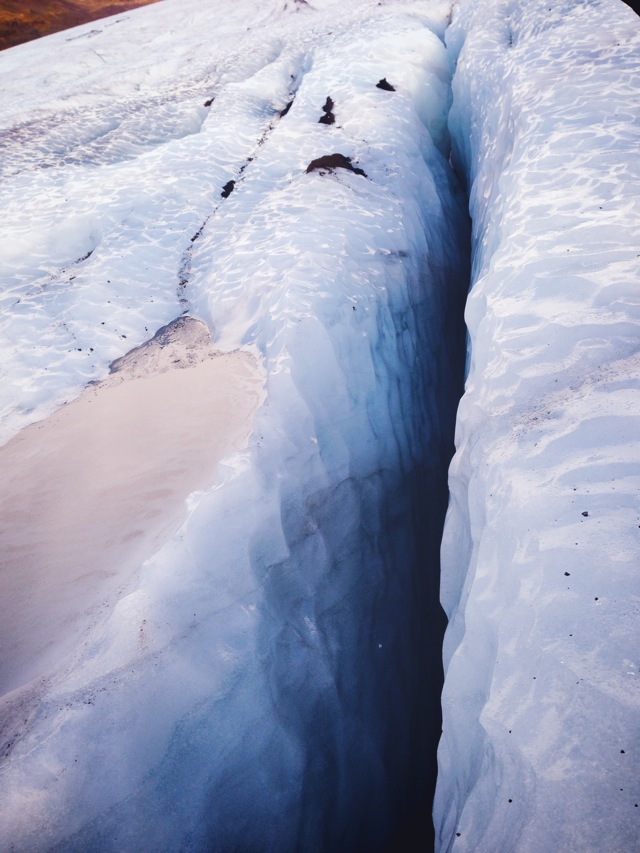 There were a few crevasses to cross over on the way back to the car park.. and yes, danger excites me.
I tried lean over as far as I could manage to get the best view of ‘what’s down there’. Well. There’s nothing down there. It’s all blackness. Reality disappoints. 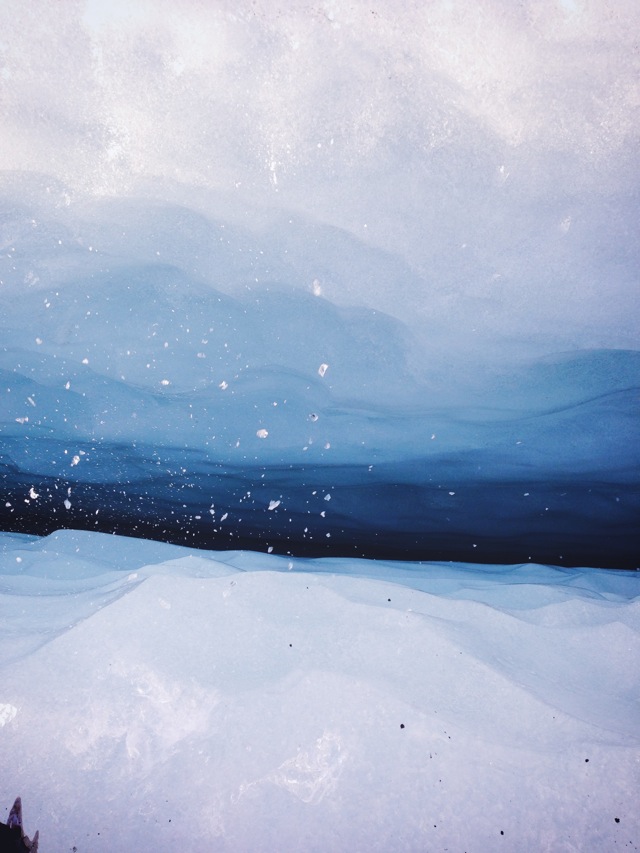 See.. I took a photo to show you.. I even kicked some ice in for effect! Haha. 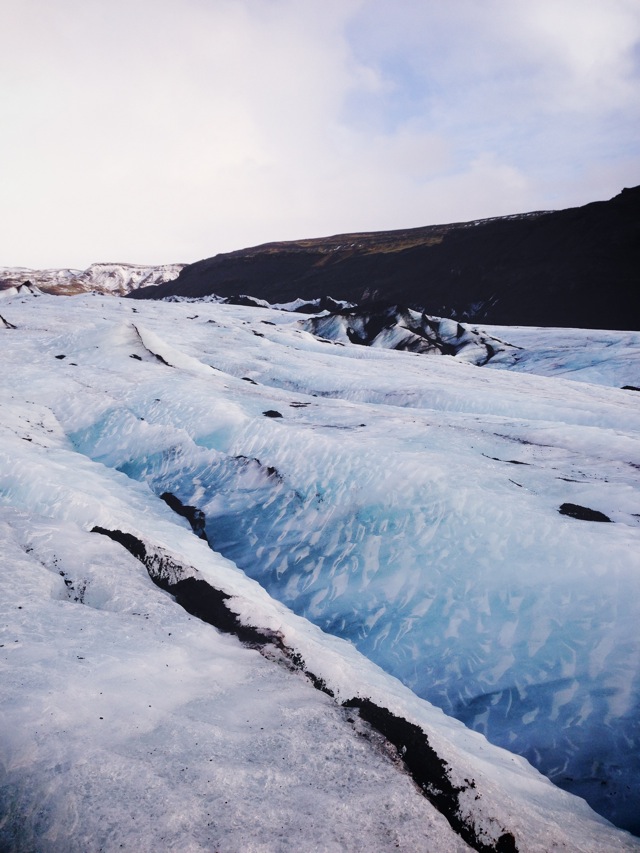 Look at the beautiful patterns on the shiny ice! When staring at it in real life it was almost like an optical illusion. At times, I found that my eyes lost focus and I was staring beyond it. It made me feel rather
wonky. 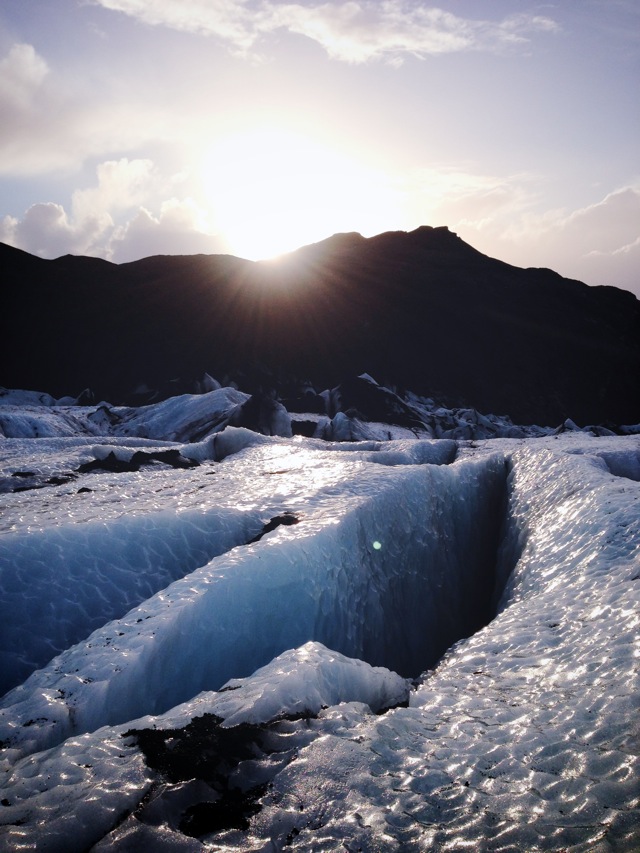 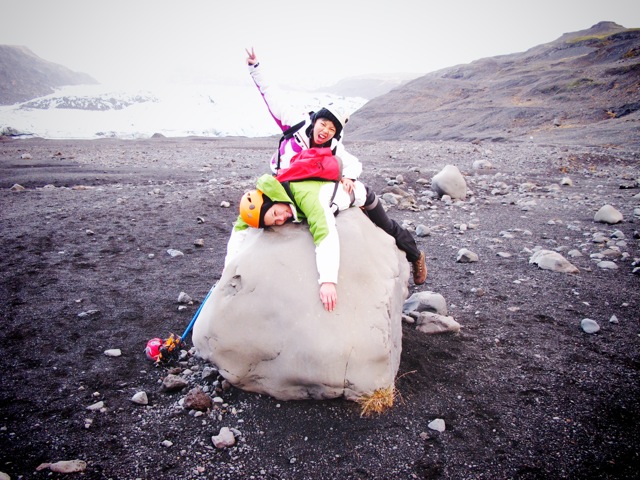 We had gotten so used to – and in my case, a little emotionally attached – to our crampons that when we had to remove them, walking suddenly seemed so.. WEIRD. I guess it’s the same weirdness you feel when you walk in normal shoes after rollerblading/ice skating/skiing etc 😉 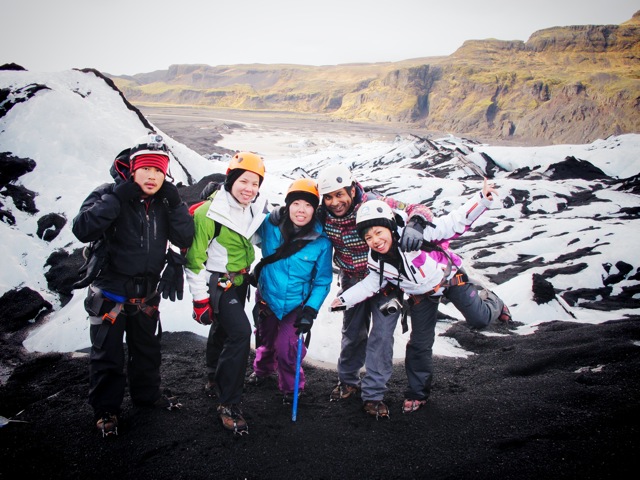 It was such an amazingly fun day.. I loved it so much. Recollecting it now, I really miss walking crunchily on that ice. If you’re ever in Iceland, you simply HAVE to try glacier hiking!

As mentioned before, I booked the glacier hike tour via Arctic Adventures and it costs ISK21,990 per person. That’s roughly.. USD170.

Girl, you’re a badass! Definitely crossing this OFF my list of things to do before I die hahahaha /weakling What a gorgeous place though. & I love, LOVE your photos!

Okay this has to be something on our bucket list! The photos turned out great. And how awesome that you guys got to see a double rainbow!! It must be some kind of sign. 😉 Have a wonderful week! Xo, M&K at BT

Thank you so much!

Ridiculously beautiful pics! I did the glacier walk/hike there last year and saw people climbing the ice like you did and I was SO jealous! Glad you had a chance to do it!

I wish I did more when I was in Iceland. Now I want to go back!!!