In January, one of my closest friends from Australia came to visit for a couple of weeks. Her name is Amy! We completed our Zoology major together at Melbourne University. Prior to this, I had only seen her for maybe two hours in January ’12, and before that, the last time we were together was in 2007! She’s one of the funniest people I know.. and she’s not afraid to get up to all sorts silly things with me. By silly I  mean playing the most ridiculous pranks on people in my apartment block and driving around the city with a bucket of water balloons in tow.. amongst other things…We made a trip to Venice over a long weekend. Although I’ve been to Italy many times, for some reason I’d never seen Venice…. and oh I love it so! 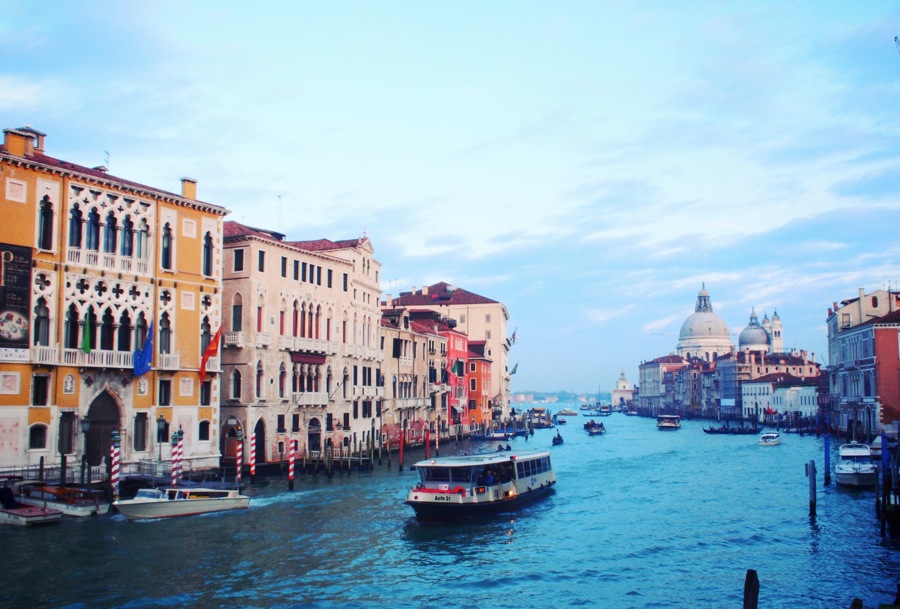 The Grand Canal.. not like you wouldn’t already know!

We were lucky in that Alberto, a dear friend of mine in London, is in fact.. Venetian. So I timed the trip to coincide with his visit home.. hehe. 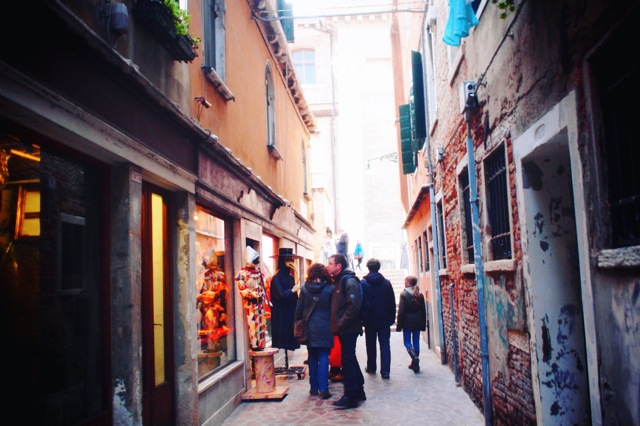 We arrived early on a Friday morning. The bus from Venice Marco Polo Airport costs €6 one way and stops at Piazzale Roma, a kind of ‘square’ where lots of buses stop. Alby’s house was about a ten-minute walk from there.

I remember standing there with Amy on that sunshiney day thinking, ‘Oooooh woooowwww this place is so beautiful it’s like MAGIC!’.

I consider myself quite well-travelled within Europe and I’ve seen many a pretty-looking city, but it’s that special feeling you get whenever you meet a place you’ve never been before that fills me with a sort of joyous energy and happiness that keeps me wanting MORE.

I ‘fall in love’ with nearly every place I travel to, and Venice was definitely no exception. 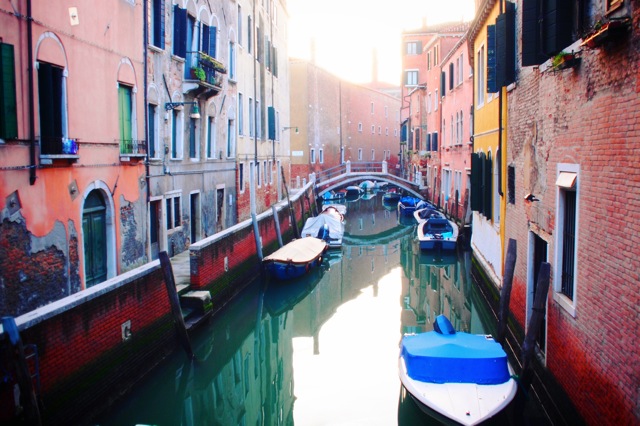 The first thing we did after dumping our bags was lunch. 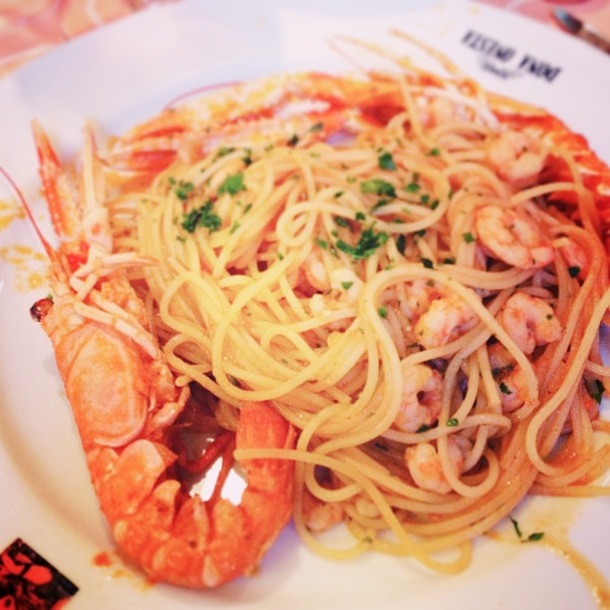 The food pic was copied from my Instagram..  Unfortunately, a few days after returning from Venice, my iPhone was stolen and so the bazillion (very interesting) photos I’d taken using it were GONE. But at least I made it a point to use my Olympus camera sometimes 🙂 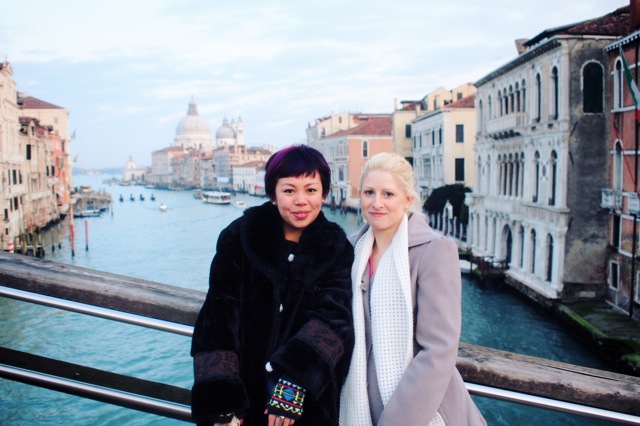 Me with Amy at the Grand Canal

We did SO MUCH walking that day. Alby was naturally and erm.. extremely excited to show us around his hometown – the church he used to go to when he was little, his school, the library, his friend’s shop, his friend’s bar, his friend’s cafe, and so on. He had so many friends there that throughout the day he was ‘Ciao’-ing all these random people along the streets. 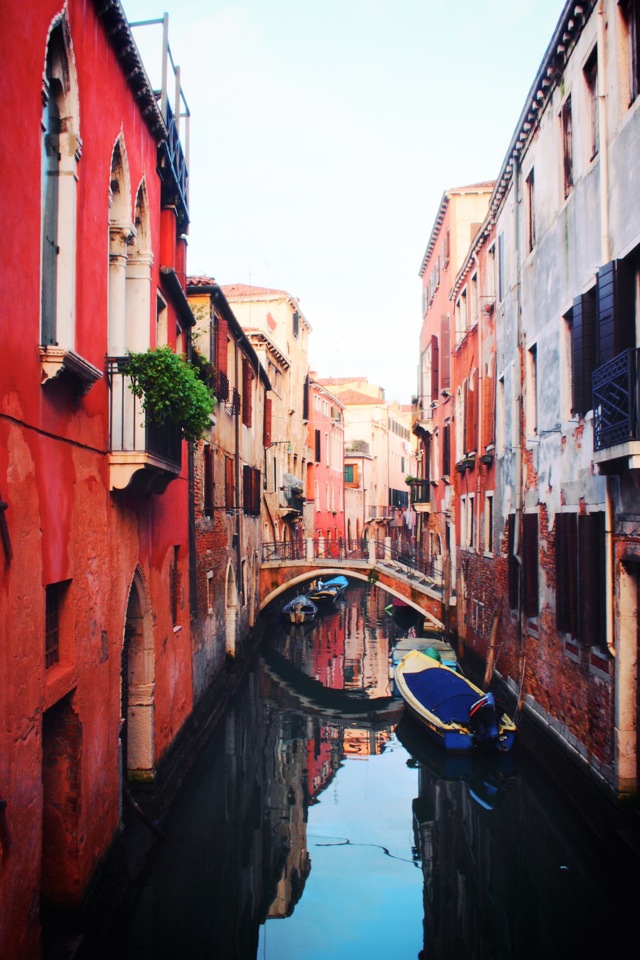 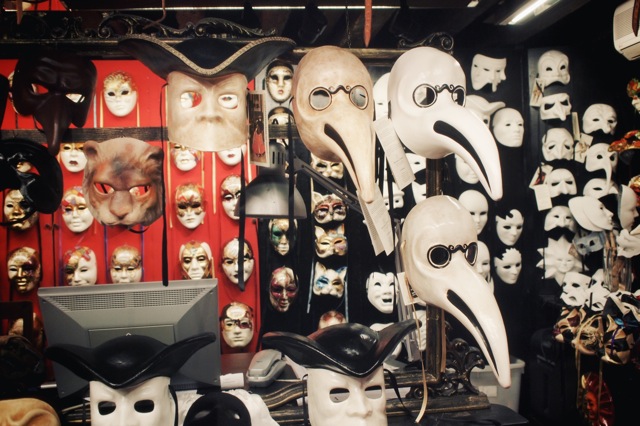 We arrived at the masquerade shop near Alby’s house.

The one with the gigantic beak noise is part of the Il Medico Della Peste costume, i.e. The Plague Doctor, as it’s modelled after the masks worn by doctors during the Black Death plague centuries ago when people believed that disease was spread through ‘bad air’ or through smell! This is known as the Miasma Theory.

Doctors wore these masks to prevent the ‘bad air’ from reaching and infecting them, so a variety of items – such as herbs, flowers, spices, and vinegar – would be stuffed into the beak of the mask.

I WAS VERY FASCINATED BY THIS MASK. 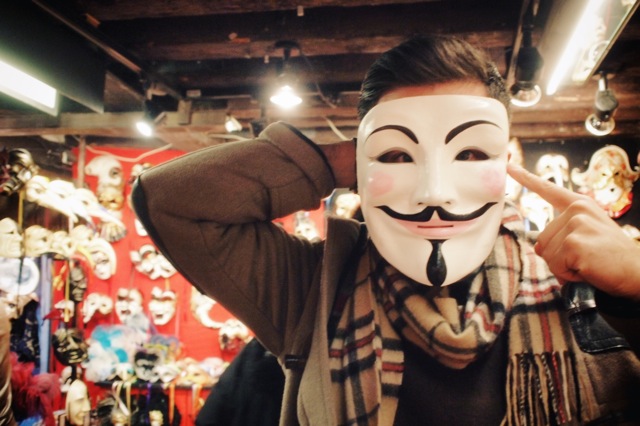 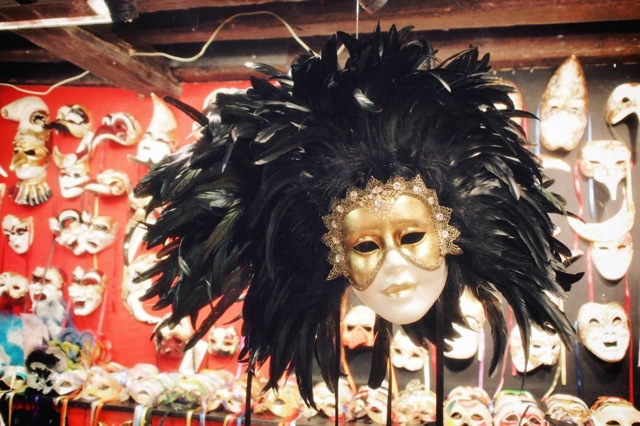 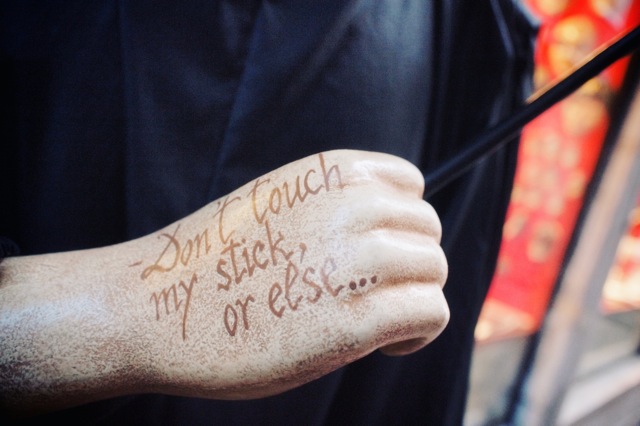 Outside the store stood a model of The Plague Doctor, complete with brimmed hat and erm.. ‘stick’, which clearly you must NOT touch. OR ELSE!!! 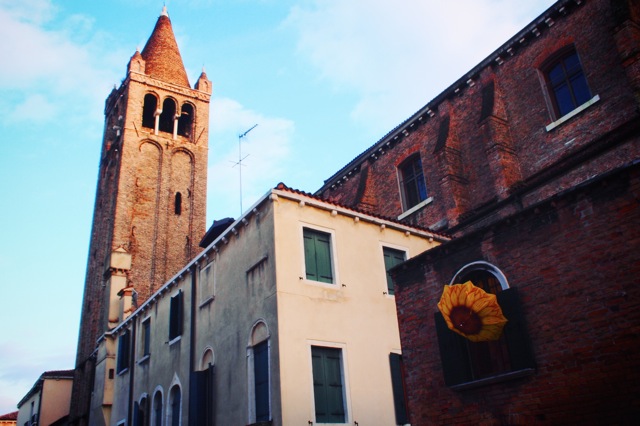 I love that sunflower brollie! 🙂 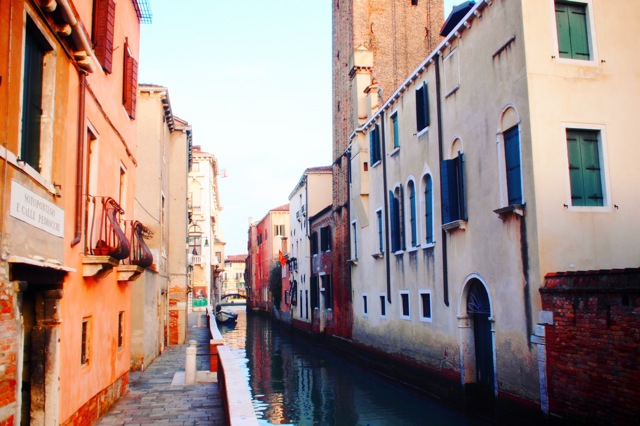 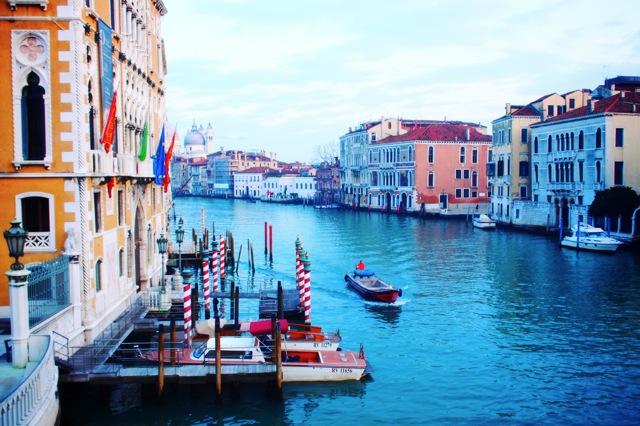 Alby was SUCH a fantastic guide. He shared with us so many interesting bits of information about the city and its history, including the gondolier trade. It was fun to hear it from someone who had grown up and lived there. 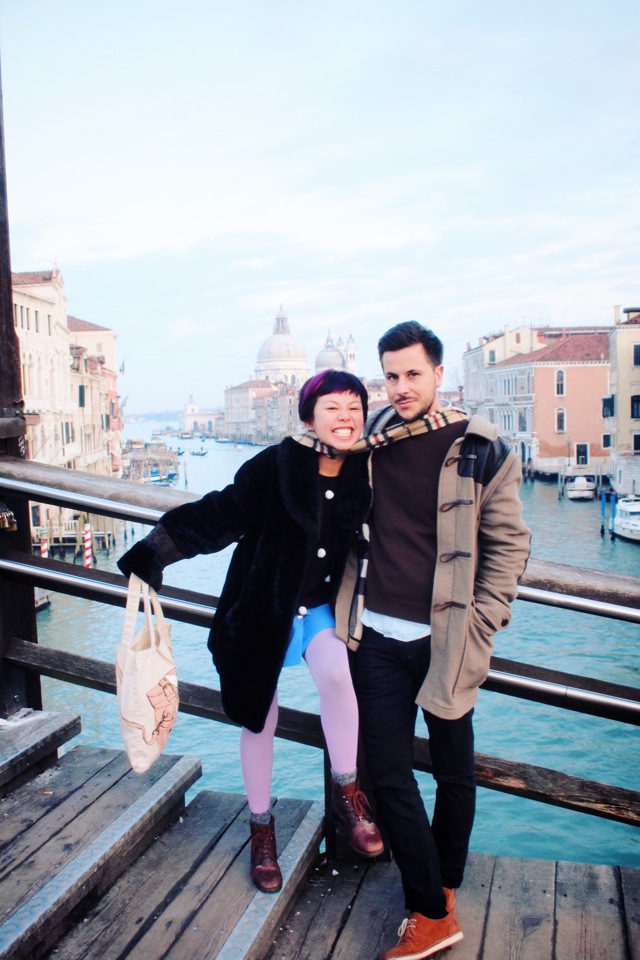 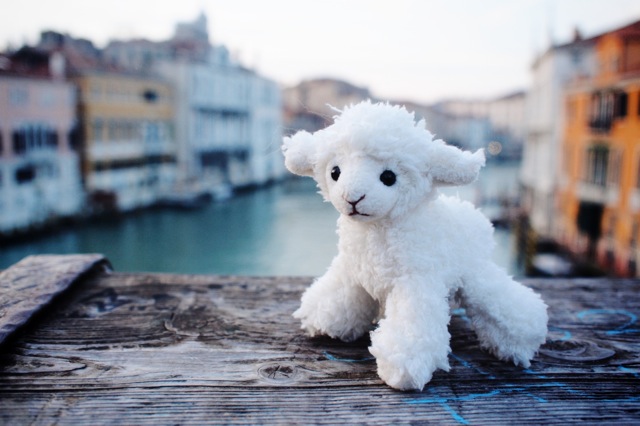 I brought my little Icelandic lamb with me. 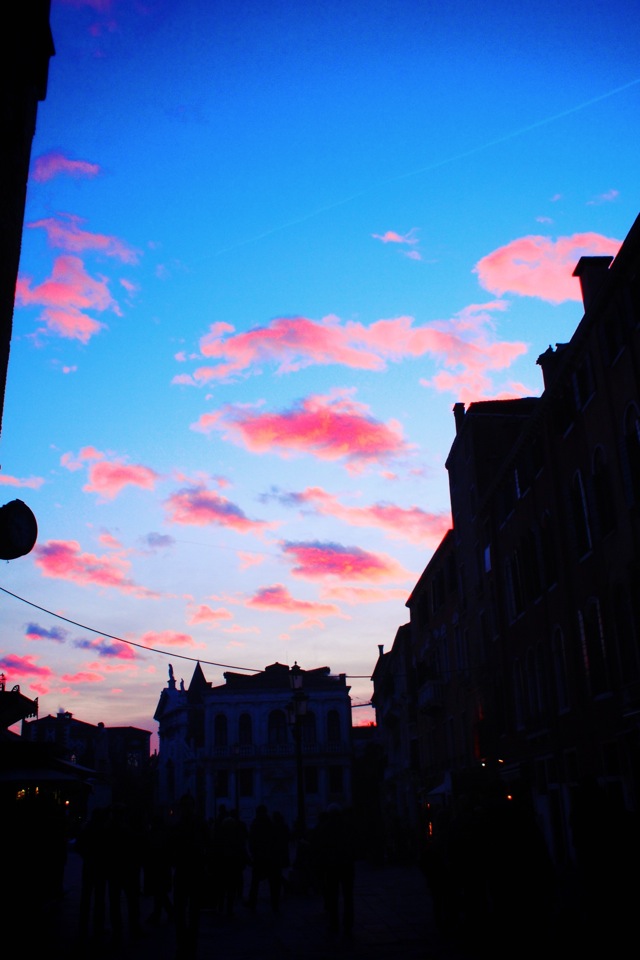 In a city like Venice, I guess the sunset HAD to be beautiful. OR ELSE!!! Haha.

When it got dark, we decided it was time to load up on the Aperol spritz (looove).. not that we hadn’t already during the daytime.. >.< 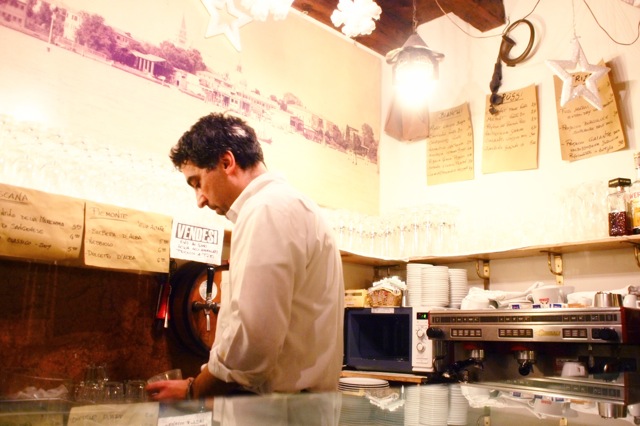 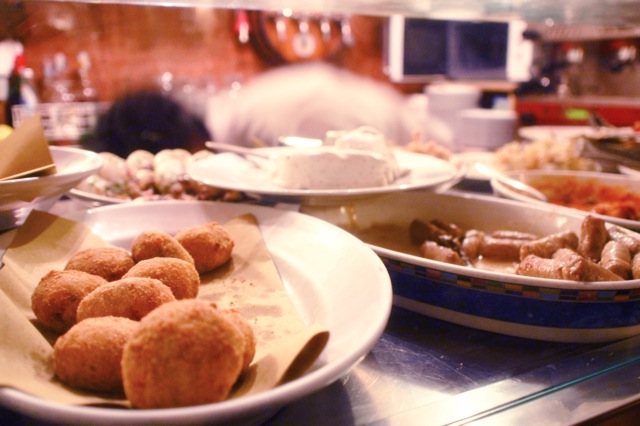 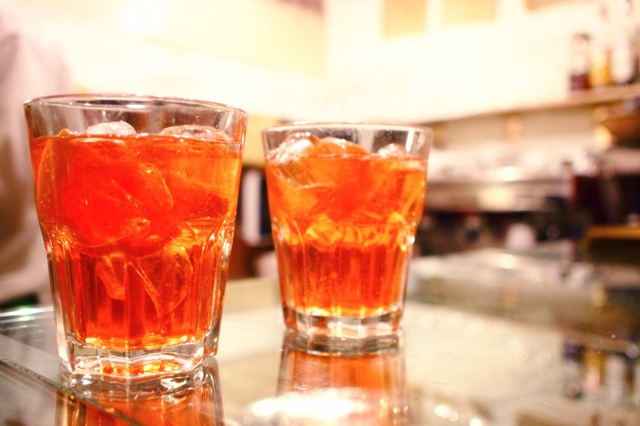 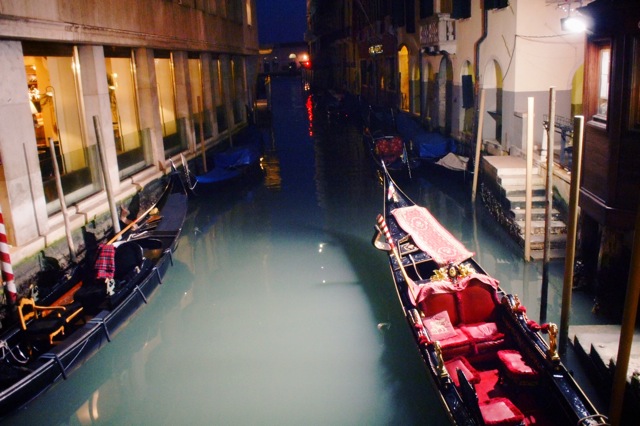 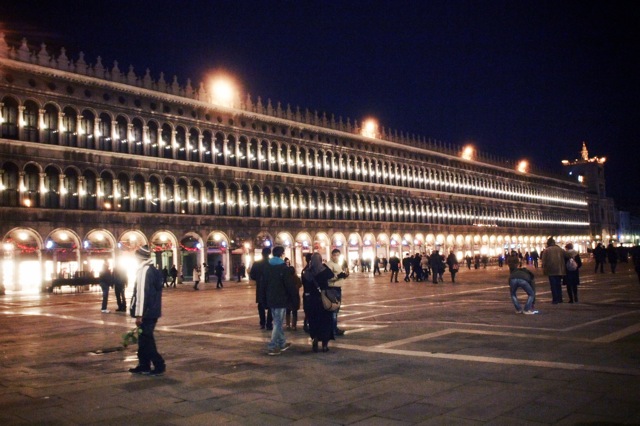 Sadly, most of the pics of the infamous Piazza San Marco were in my stolen iPhone and I only have this one from Amy to show you! But oh well, there wasn’t much to do there after sundown anyway. 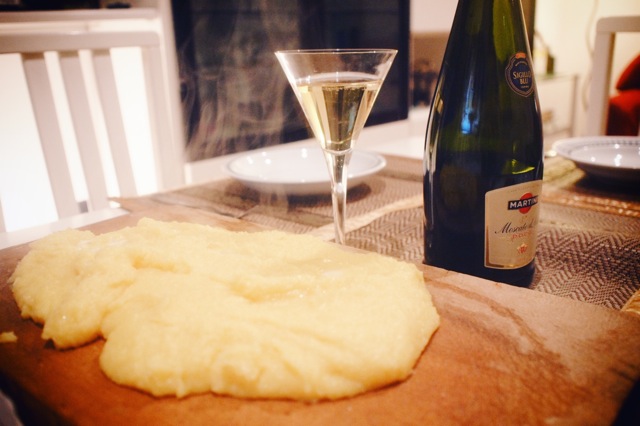 We headed back to the house in the evening to have some homemade Italian polenta and delicious pasta with pesto, courtesy of Alby.  Again.. most pics were on my phone -_-

We were so stuffed! The rest of the night was spent drinking countless glasses of Spritz. Hehe.

Here are a couple of pics I salvaged from Instagram: 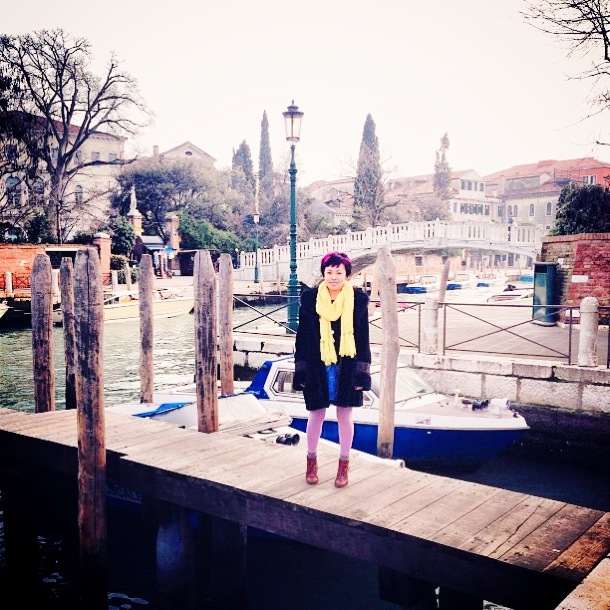 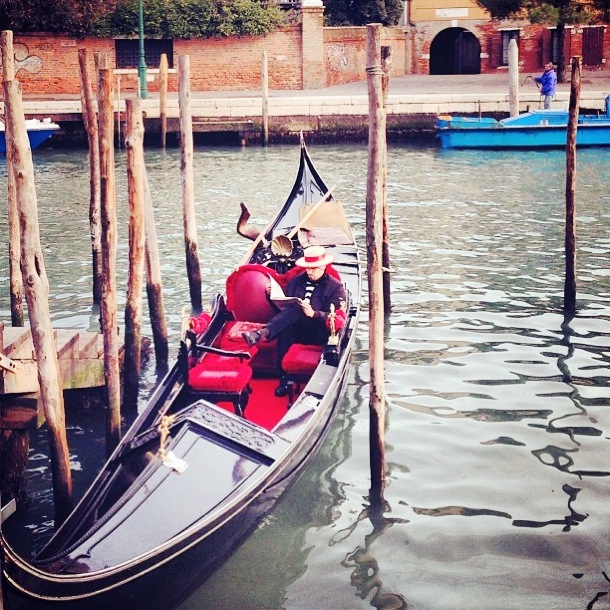 A rather chilled-out gondolier (had to be, ’twas about 5 degrees anyway) 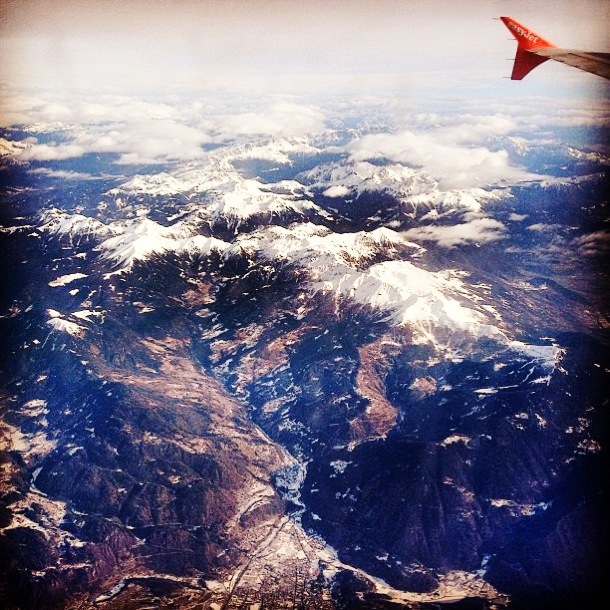 View from the plane – flying above the alps! 🙂

If you’ve been to Venice before, what was your favourite part about it? Did you go in the summer or winter?

I went to Venice a couple of years ago in January and it was absolutely frrreeeeziinngg. But as it wasn’t peak season, Venice was fairly tourist free so we got to see all the amazing sights without the masses of people (Which i loved!) I think my favourite thing about Venice was the community atmosphere, seemed like everyone knew everyone! I also loved how peaceful and serene the island was in the evening. Definitely one of my favourite places I’ve visited 🙂

Gorgeous pictures.. we were in Venice a few years ago.. I think it was september, the weather was so beautiful.

Oh I bet it was deliciously warmer in September, lucky you! 😉

excuse me – why hasn’t Croatia made it here yet? :p

i just love your blog – still! i adore your photography and your cute commentary.
i think i’ll need a little lamby type companion when i travel europe in july as i’ll be going alone.
ok i’m going to read more now
!!