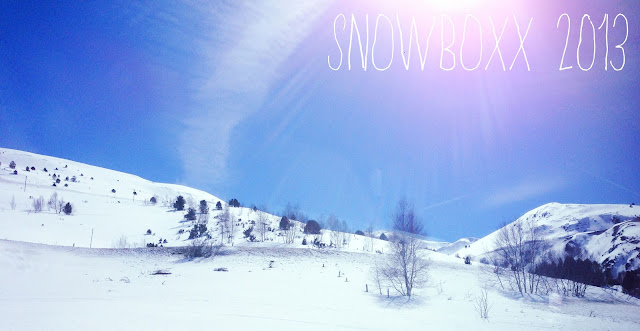 In March this year I attended my very first ski festival, Snowboxx! Snowboxx is like a very much smaller (and more affordable) version of Snowbombing.. and it’s also new. Held in the resort of Arinsal in Andorra, 2013 marked its inaugural year.Reena and I booked our package through their website AGES ago in December (to me, planning three months ahead is super early). The great thing about the Snowboxx booking system is that you could book your place by simply paying a deposit of £50 (peanuts).

Depending on which hotel you selected, you could get six nights’ accommodation, five-day lift pass, plus the festival wristband for £199pp. Ours was about £250pp. You only pay the balance sometime at the end of January, and then you still have until March to pay for optional extras, such as transfers, ski/snowboard school, equipment hire, or extra nights at the hotel.

After adding on snowboard hire, lessons, transfers, we had spent about £475pp. I thought it was superb value for ONE WEEK of fun and music on the slopes! In comparison, attending Snowbombing would’ve cost me double for the SAME things.

We booked a very-early-morning flight via Easyjet to Toulouse, France on the Friday (return ticket = £110).

In my excitement – and lack of organisation – I didn’t sleep at all the night before. We were at Blackfriars station waiting for our train by 4am! Can I just say that Blackfriars is an absolute shit station. It’s got NOTHING and it’s freezing cold..

We were walking around the whole place looking for somewhere to shelter from the chilly air and ended up in some sort of construction-materials room.. so we hid there for 15 minutes. A totally unglam start to our holiday.. haha 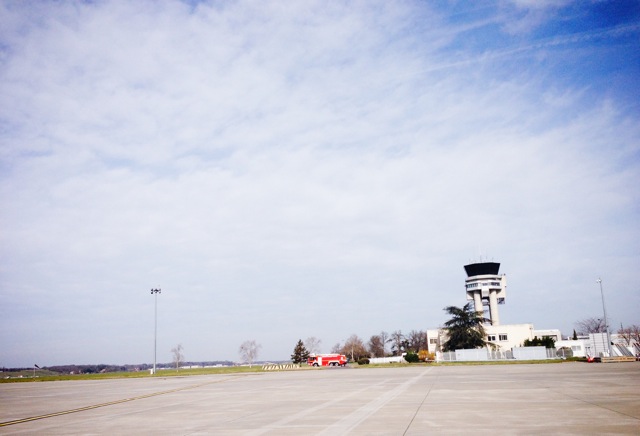 But once we touched down in Toulouse, all memory of crappy ol’ Blackfriars station were burnt away.. by the brilliant sunshine that greeted us as soon as we stepped out of the plane! We had a bit of time to kill before our coach transfer to Andorra so I took out my GoPro to test it out.
It’s my new toy 🙂 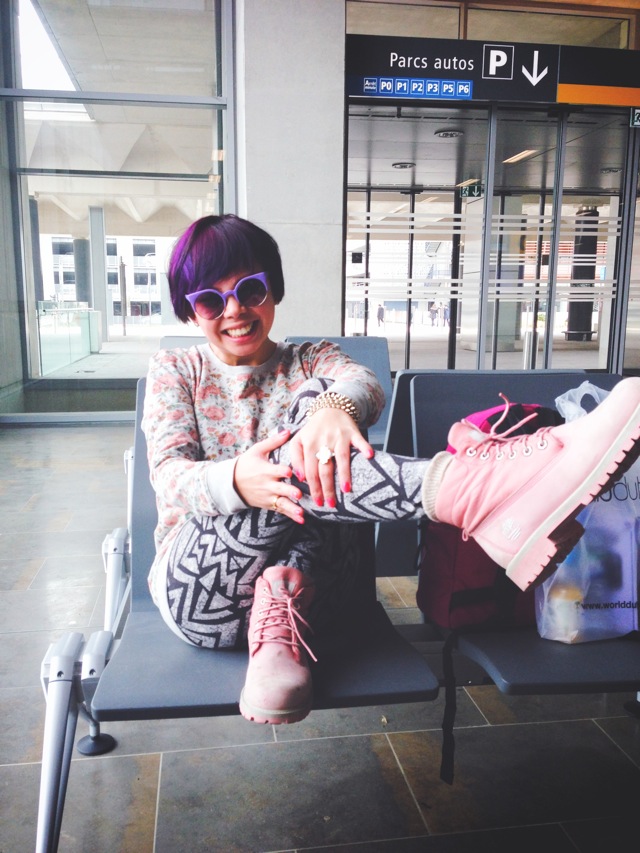 ^Me and my pink Timberlands.. still can’t believe I survived the whole festival in that ONE pair of shoes.. -_- 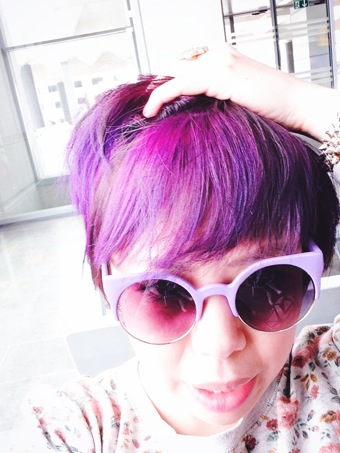 In between packing the night before, I did at least manage to add some fresh dye to my washed-out hair.

It was when we were queuing for the bus that we made an observation. Tactlessly, I said to Reena, rather loudly, “Wow there are a lot of [male body part]s here!”.

I was just on the last word when someone cut me off, affirming my thoughts with, “Yeah it is a sausage fest isn’t it”.

Haha! So yes.. there were a lot of boys attending the festival (not a bad thing).. and barely any girls! 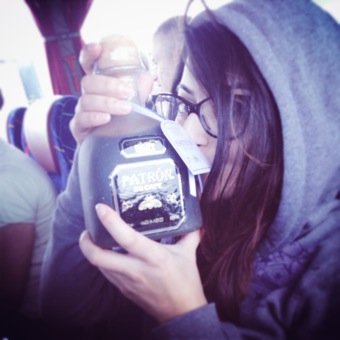 Enjoying our duty-free goodies on the bus.

Driving From Toulouse to Andorra

I created a separate section for this because the drive to Andorra was really beautiful! I was dead sleepy but because there was so much to see out the window, I forced myself to stay awake to enjoy all the things we were passing by,

Here are some through-the-glass snapshots from the drive, taken mostly with my iPhone 5: 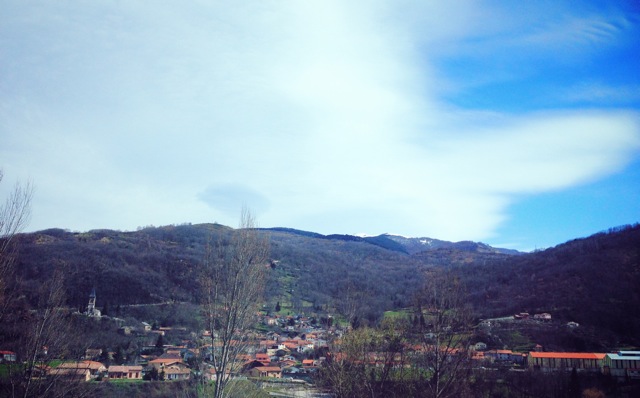 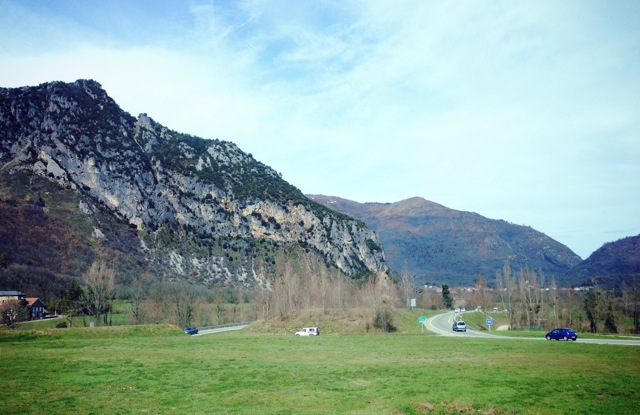 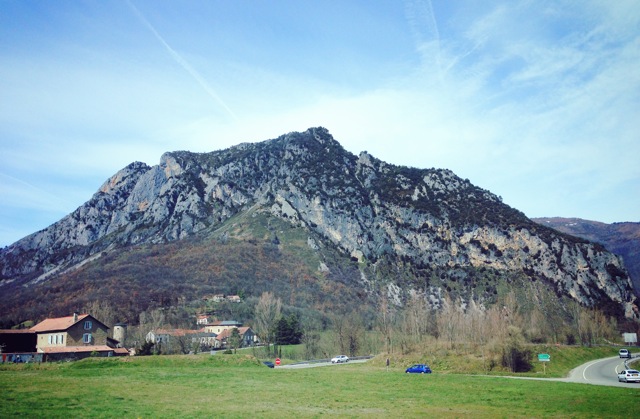 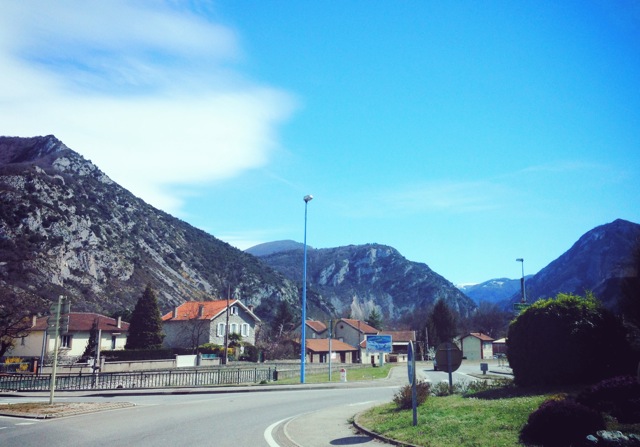 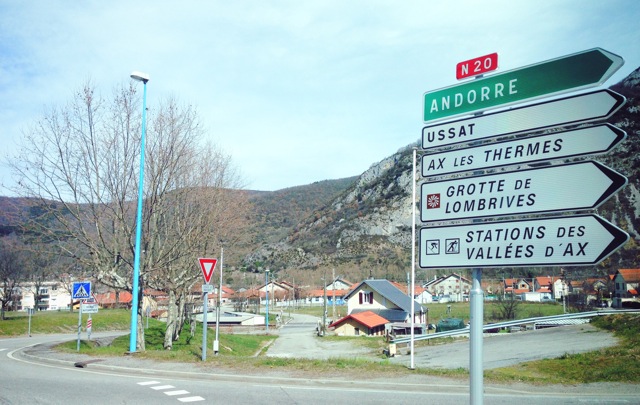 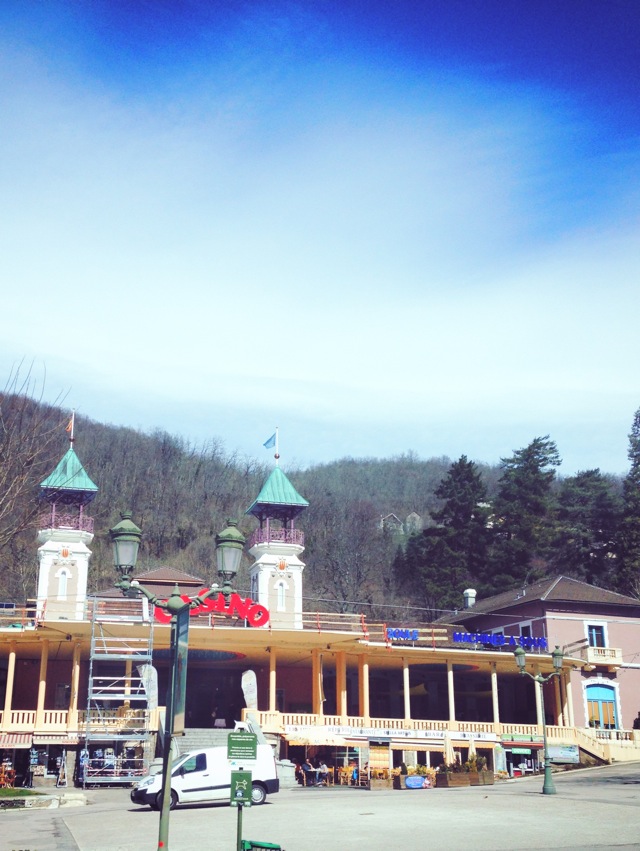 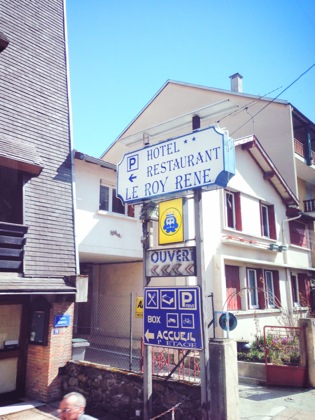 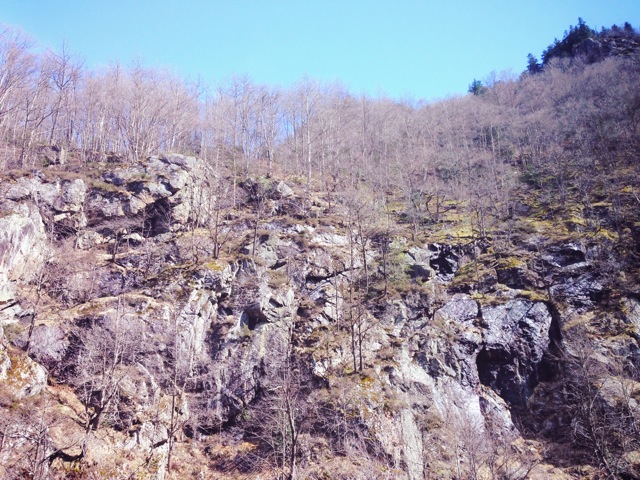 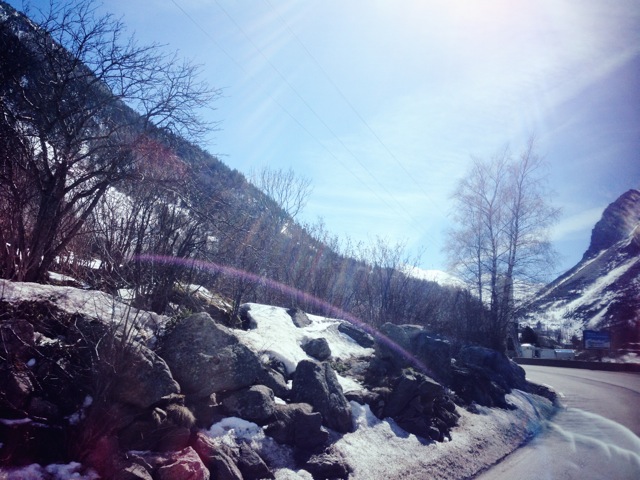 I think I let out a little squeal when we started ascending and seeing patches of white snow. 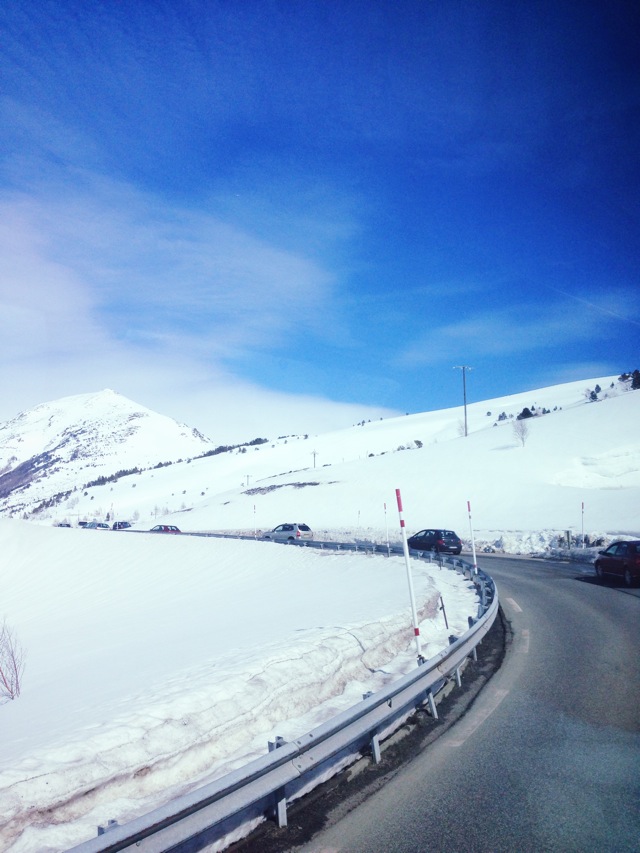 ^And then those small patches became.. big plains of snow. 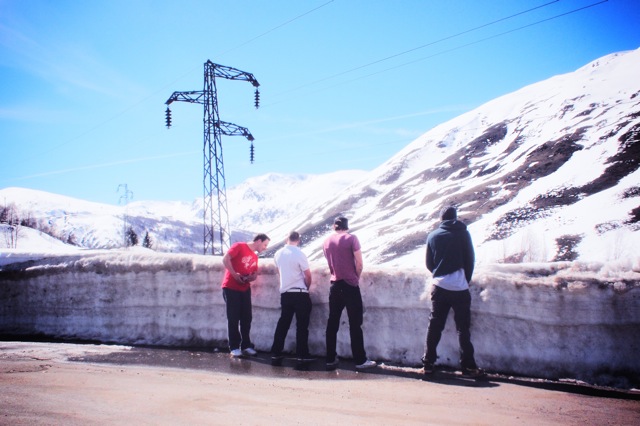 Our bus driver was considerate enough to stop a couple of times for us to take toilet breaks along the way. But on this occasion, it was a boys-only toilet stop. There were, after all, only five girls including Reena and I on our bus. 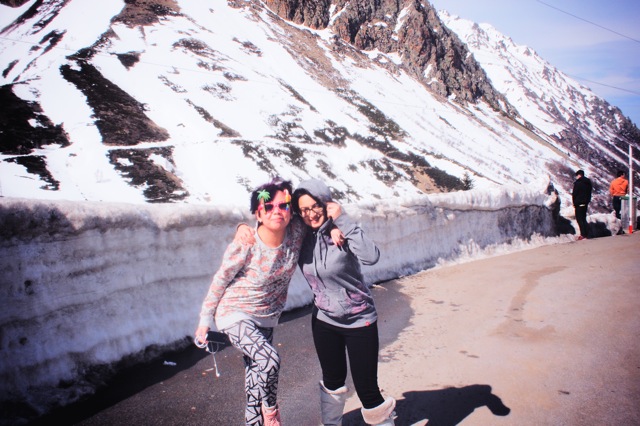 ^Goofing around (as usual). It was SO GOOD to smell the fresh air! 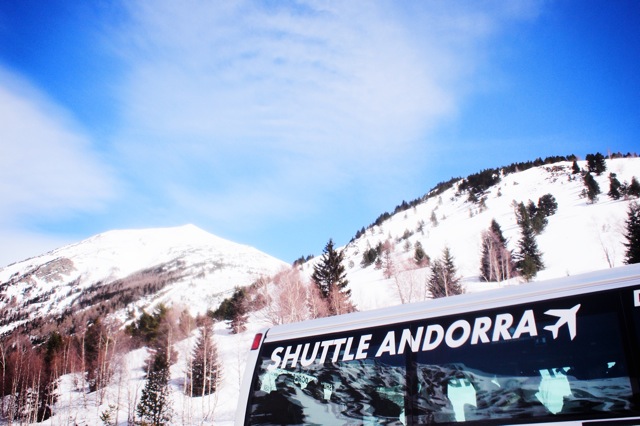 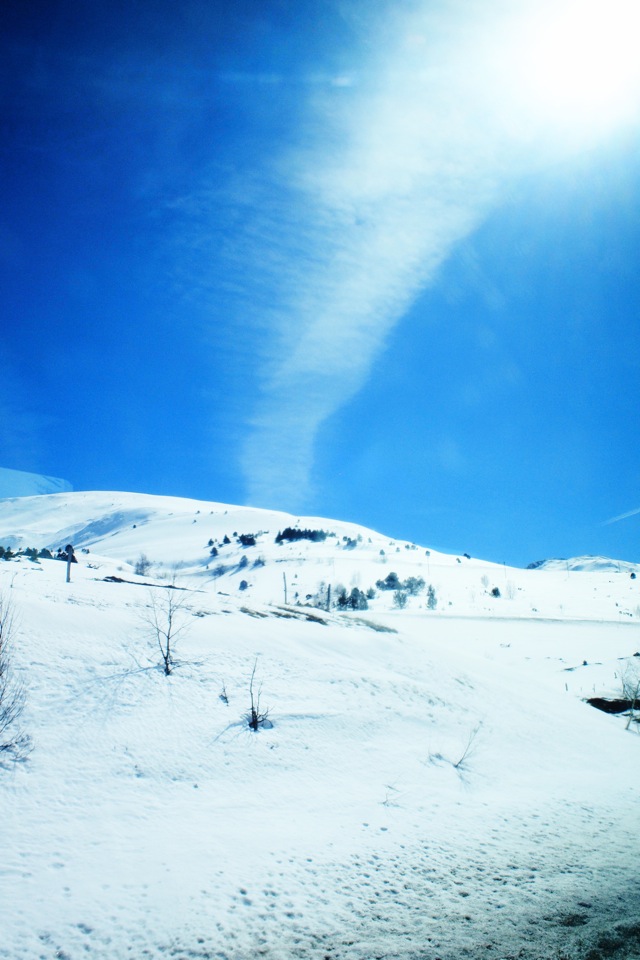 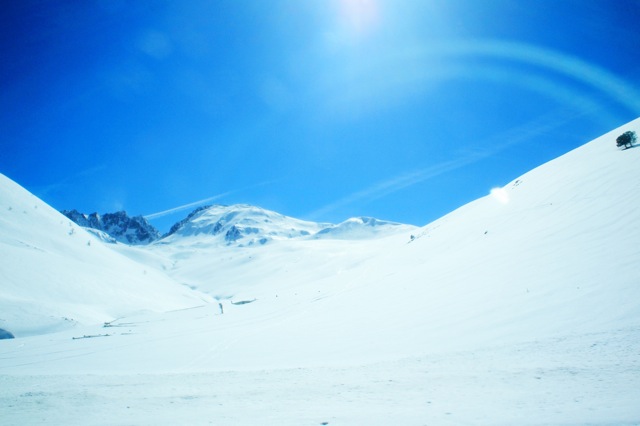 It was super bright and sunny.. the perfect welcome.

The bus dropped us right outside our hotel (Husa Xalet Verdu), which I found to be nicer than I expected. It was on a small hill and it was cute.

Was so knackered from the long journey from London and so we crashed on the bed for a couple of hours before heading down to Cisco’s (a popular restaurant/bar/club in Arinsal) to grab dinner. 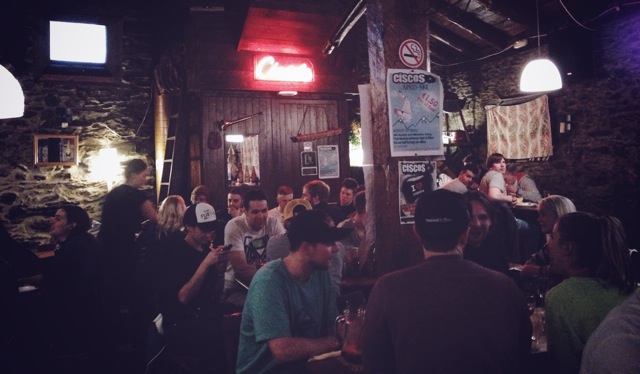 ^The place was packed with other festival-goers – mostly boys as you can see.. 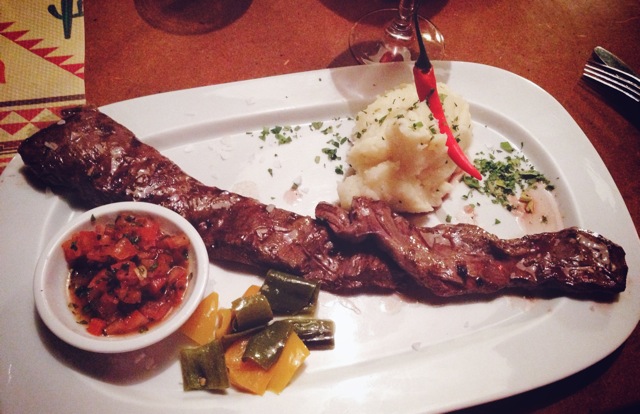 ^I had a tex mex steak. Ok I know its shape is dodgy but it tasted excellent! 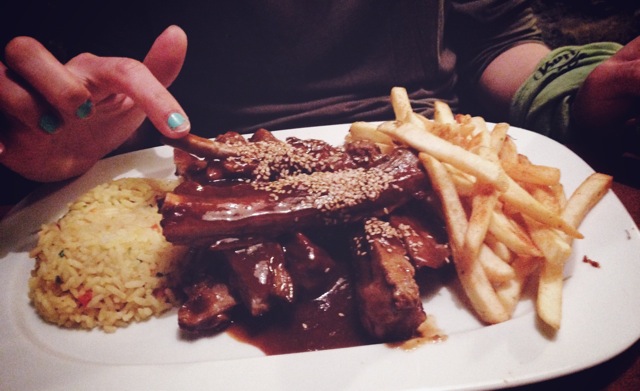 The Snowboxx team had sent us full details on where to go to collect our wristbands, along with information on checking into hotels, where to get your ski/snowboard equipment, list of discounts available (for food/drink), etc.

They had booths set up in the upstairs of another bar, El Cau, only two minutes down the road – one if you run.

Admittedly, upon arrival at the hall, we felt like we were back at uni again, registering for something at O-Week or something (in Australia, where I went to uni, O-Week is Orientation Week).

Everyone was so.. YOUNG. And everyone WAS still probably attending uni.. Not that I’m complaining! It was kinda cool. Especially since no one could guess that we were way past uni. Reena and I declared ourselves 21 for the sake of the festival ;p

There was a pretty good live band there that night.. and I nearly screamed with joy – actually I did – when they played one of my FAVOURITE songs: Where is My Mind by The Pixies

I managed to record a short clip.. which I’ve just watched myself now and oh I really do love that song.

That alone made my night FAB. 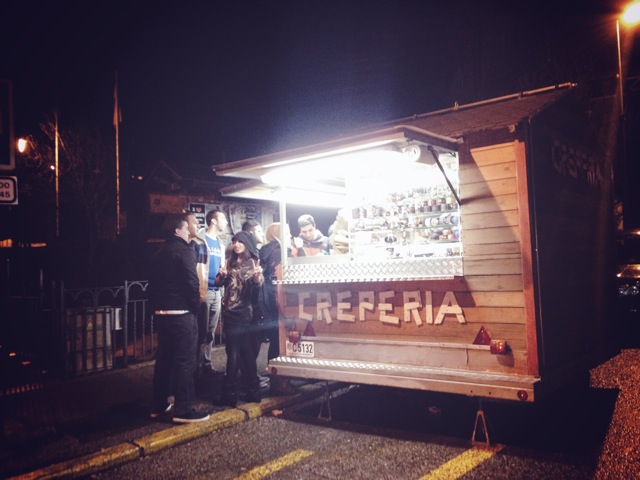 We bar-hopped for a bit, and then stopped by this little creperia outside the main gondola entrance. This creperia proved to be very popular with everyone during the course of the week.

Reena and I went to bed that night like fidgety children – we couldn’t WAIT for our first day on the slopes! I was excited because it was to be my first time snowboarding (I normally ski).

I super love your pink Timberlands! It’s so you! 😉 Haha at the men’s peeing station. But why is the red guy staring at the other guy’s… body part?

Can’t wait for the rest of the story!

always always jealous of your travels! and that food is looking mighty fineeeeeee

Loved the long post and your photos are beautiful! I’m really jealous of your Snowboxx adventure, that’s such a great deal for skiing, IN FRANCE! I hope you really tore it up on the slopes. Can’t wait for your next travel installment. ^__^