On Sunday, despite having been out late the night before, we woke up bright and early because we knew that it was going to be a beautiful, hot, sunny day. I rolled out of bed onto the balcony to be greeted by this scene: 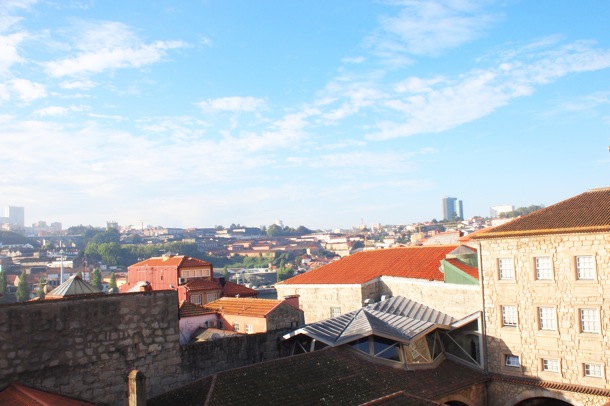 I felt SO incredibly HAPPY I think I must’ve flashed the sky my biggest smile before screaming to the girls, “LOOK!!!”

And then naturally I went to grab my camera so I could try and capture it. 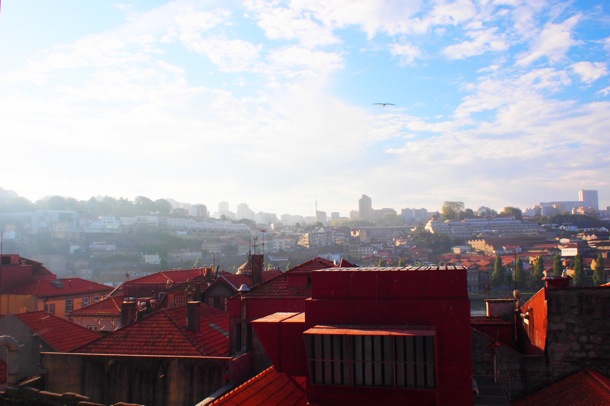 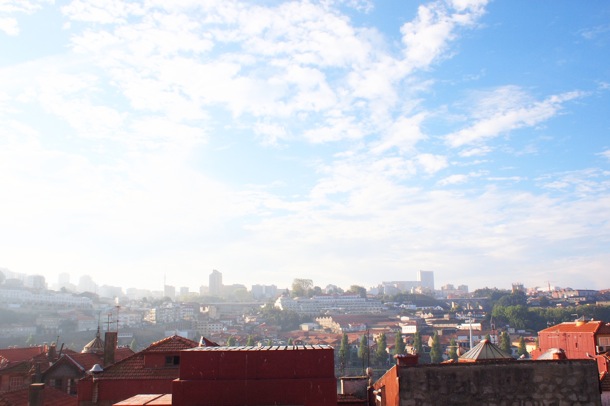 We were so lucky to find this apartment – the location was absolutely perfect. It was literally a two-minute stroll to the river and the bustling Ribeira strip, and about a ten-minute walk to the city centre. There were shops and cafes and restaurants just downstairs too. The apartment was so modern (phew what a change from old London flats) and CLEAN, too.

I booked four nights there via Airbnb. The host, Miguel, was really friendly and helpful and marked all the cool spots on a map for us. The best part though was that the room came with a bottle of port.. 😉

The excitement level for the day was so high that we didn’t really bother with breakfast. Instead, we packed up our bags really quickly and the next minute, we were in a cab to Matosinhos Beach! Even the ride there was beautiful as we passed along the river. The fare comes up to about €10 and takes approximately 25 minutes from Porto (read: CHEAP). 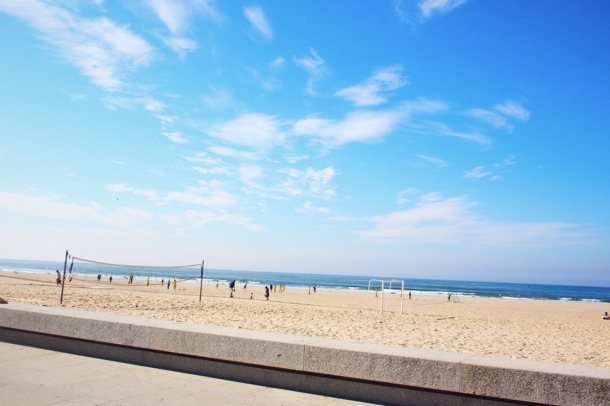 I don’t even know how to describe.. how BIG my heart FELT when I saw the beach! I was bursting! (it had been a long time.. erm since June since I saw a beach). Most times when I find myself in such a situation, I just RUN, arms flailing, straight towards the sand and the water.. Sometimes I make a few weird sounds in addition. 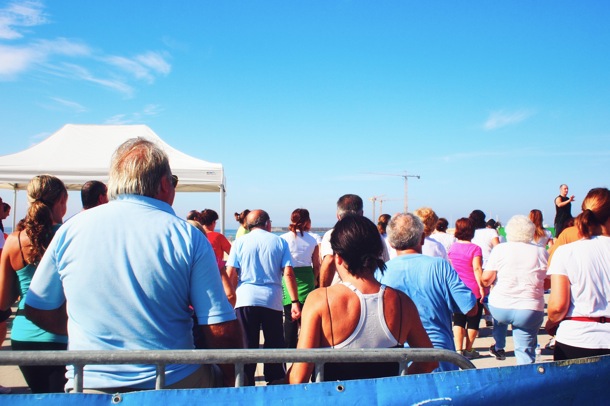 Before my eyes popped out, though, I spotted this happy group of people doing some sort of Tai Chi class.. and I couldn’t help but laugh. Haha! 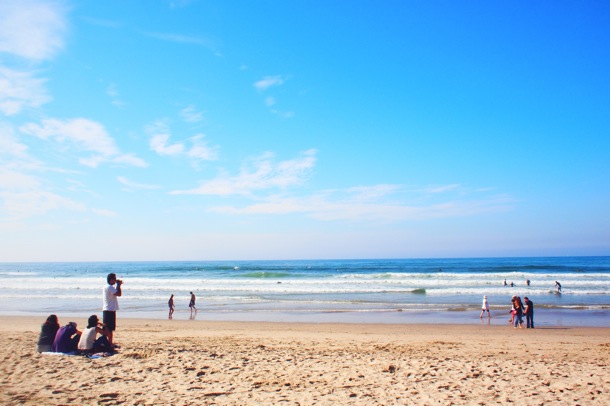 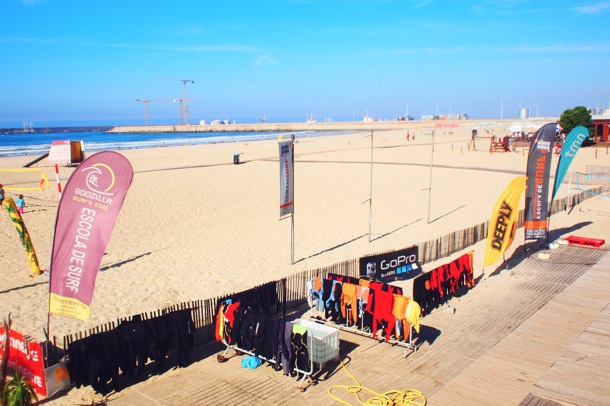 We met Alberto at the Onda Pura surf school, who couldn’t wait for us girls in the morning and headed out himself to catch the early waves. We met Marcelo, the founder of the school.

Reena and I promptly booked ourselves into a class to start in an hour or so. I was so super excited I was just dying to go STRAIGHTAWAY, but Reena wanted to go for a jog first.

So meanwhile, I did my favourite thing – play at the beach! Izan set herself up with a parasol that the surf school so kindly offered to her. 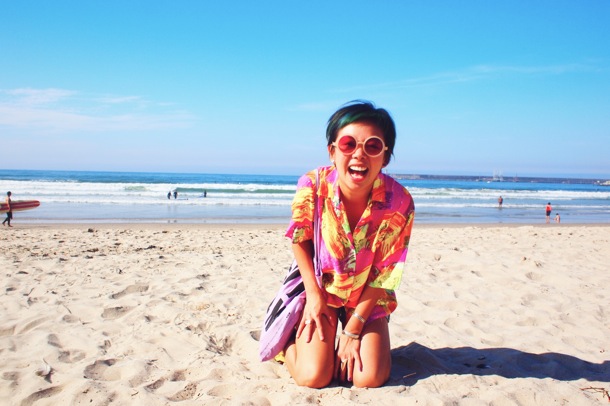 I put on my most colourful (vintage) shirt 😀 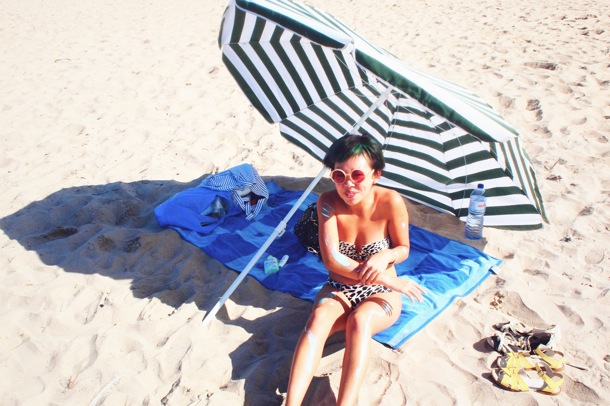 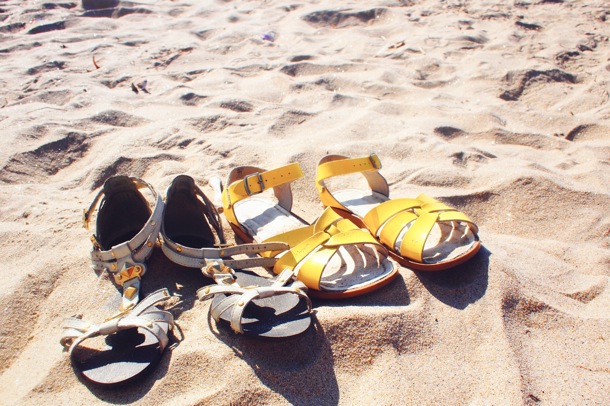 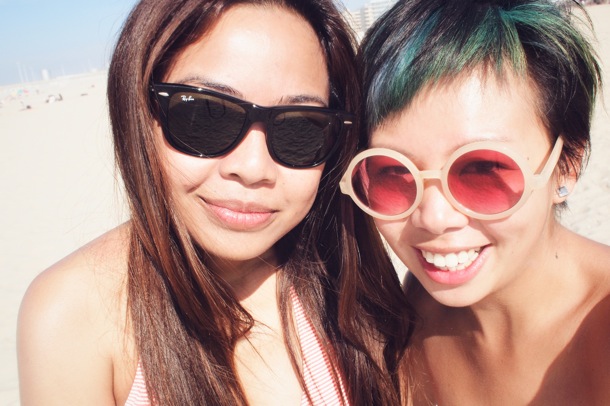 As usual, I wanted to get some jump-shots, so I approached a stranger on the beach and gave him instructions.. and omg he just could NOT get the timing right! I think we must’ve jumped at least five times unproductively. Resulting in a string of funny pics of us looking like we’re about to take a dump.

This was the closest successful shot, which doesn’t even have our feet in it.. 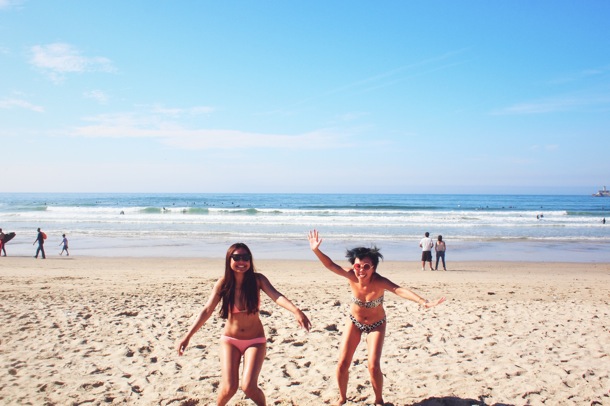 After our failed attempts, we decided to just do it ourselves.. 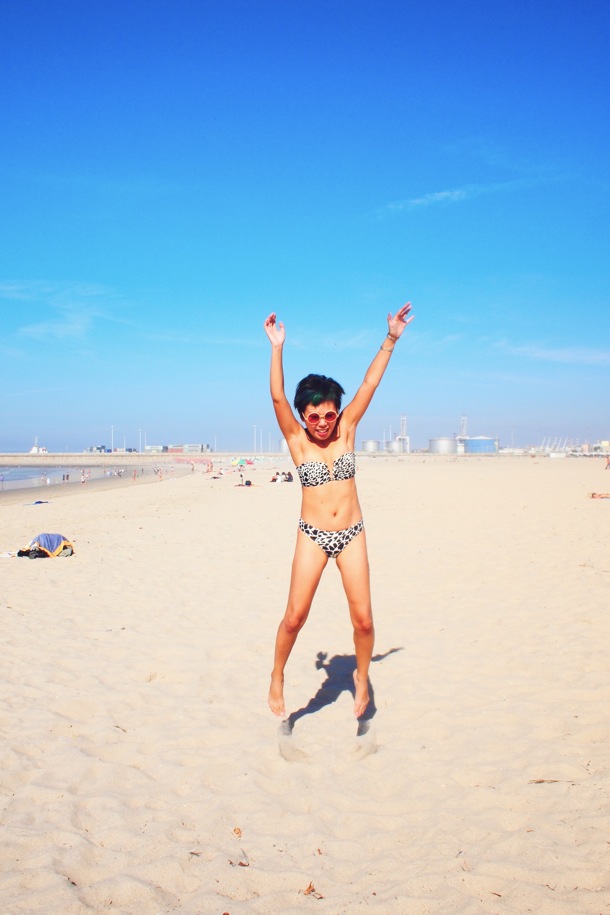 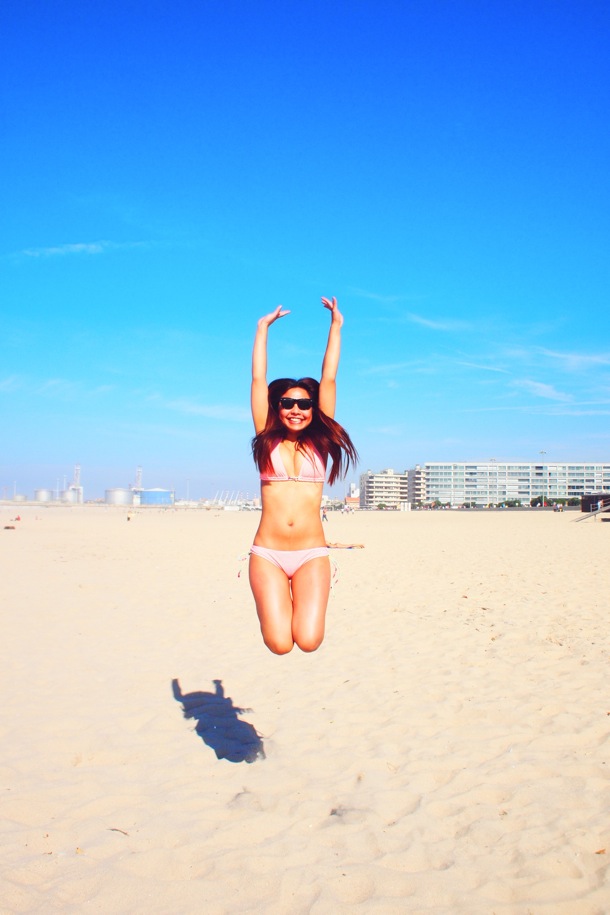 After playtime, Reena was back from her run and it was time for our (very anticipated) surf lesson!! 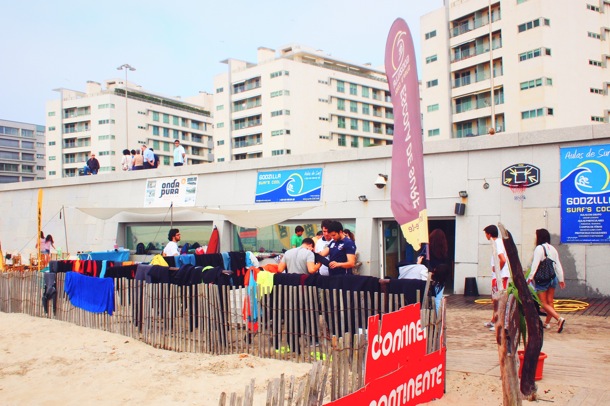 We got suited up outside. I never liked putting on wetsuits.. and mine was so tight that it felt like a workout in itself! I’m still amazed that my body fit into that tiny thing.. it was like, the size of a condom, pretty much. 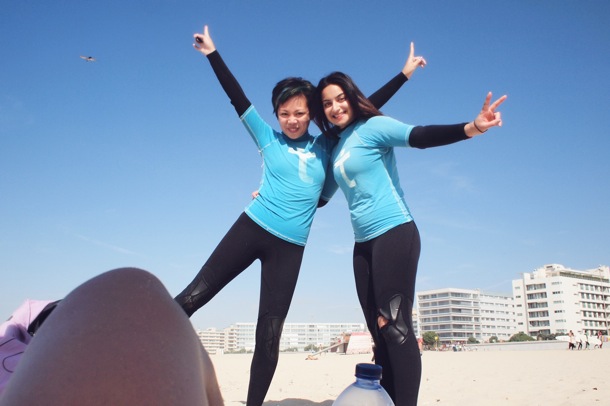 Our surf instructor was a nice guy called Zé who was super patient with us.

And guess what! I managed to stand on the board at least five times! It was soooo much FUN!!! I felt so achieved when I could stand and ride the wave till the end (even though it was just in a straight line).. sort of the same feeling I got when I managed to waterski for a good distance on my first try two summers ago in France.

It was so exhilarating that even though the water was cold and the waves were so rough they kept knocking me upside down, I was completely numb to it and kept lugging the (heavy) surfboard back into the sea for more more MORE.

I can’t believe I didn’t learn this and become a pro when I was studying/living in Australia!

After the class, Reena and I promised ourselves that when the weather gets warmer again we’ll book ourselves into an intensive surf course/holiday.

Unfortunately, there are no pics of us in action (maybe a good thing).. 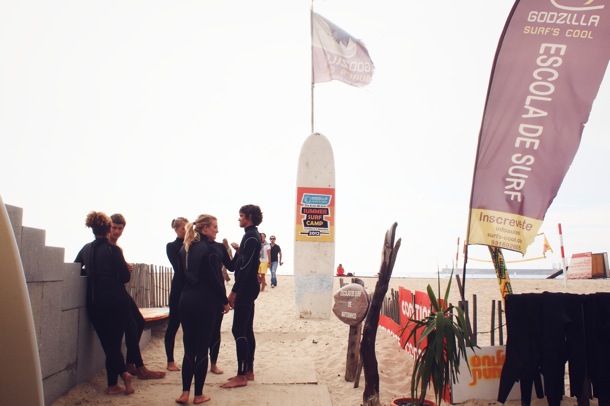 Two hours later.. we had to endure a difficult walk back to the school. Because I’m so small, I can’t carry the board with one hand and had to painstakingly drag it through the sand. And after the lesson, my arms felt like MUSH. God that was a long walk..

But SO worth it! I was feeling amazingly happy and being there amongst all those surfy people was such a great atmosphere. Oh and they were also playing Jack Johnson all day. So cliche but it was just the perfect setting and I was just. so. happy. 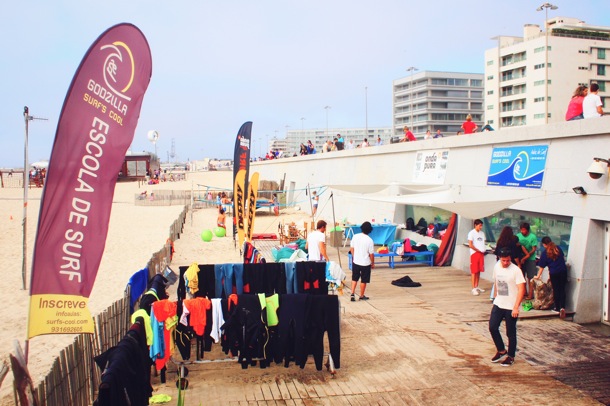 Ok.. I thought for a long time about posting this video, because I look like CRAP after coming out of the sea.. but whatever. Here it is! 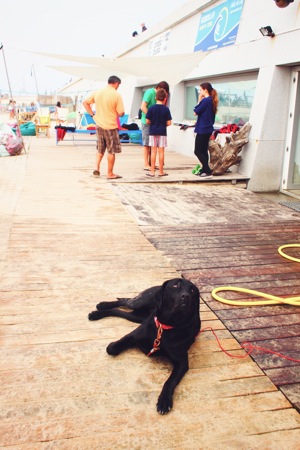 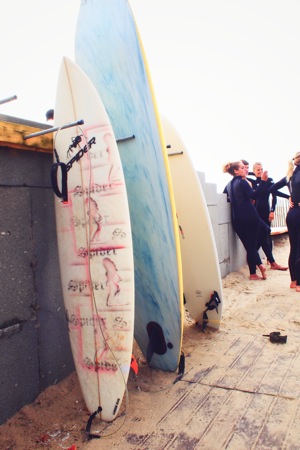 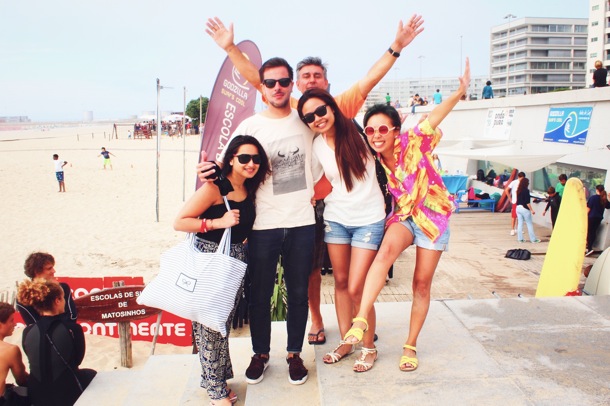 Reena, Alberto, Izan, and Me! The guy at the back is one of the managers of Onda Pura Surf School.

If you’re ever in Matosinhos and want to try out surfing, it’s THE place to go. Everyone’s so friendly and encouraging.

Have you heard of tarp surfing (click through for more info)?

I hadn’t, but got to witness these cool surfer kids doing it first-hand! 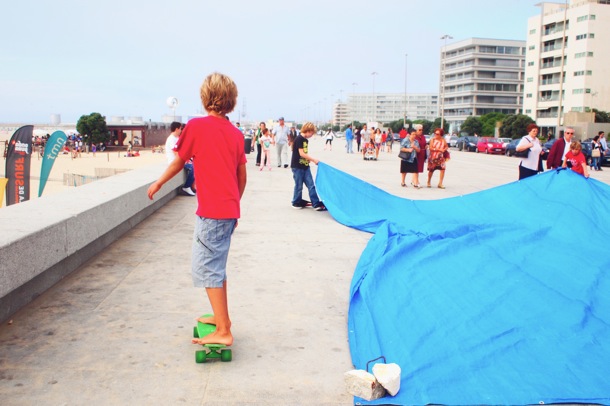 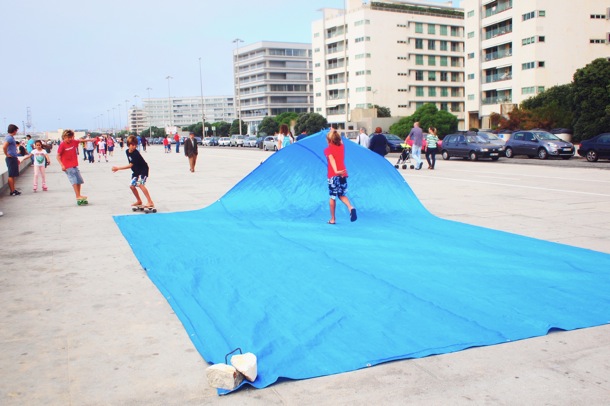 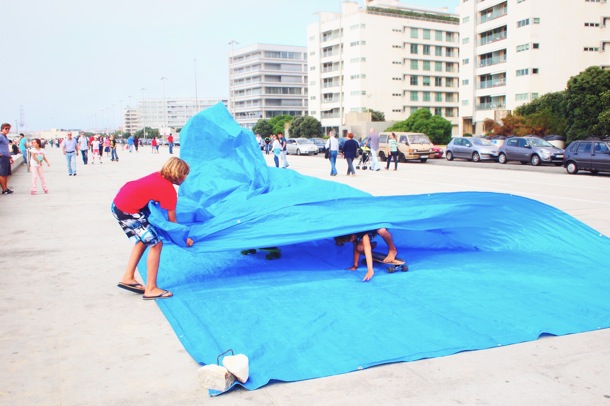 And finally, success! (I caught it on camera, of course) 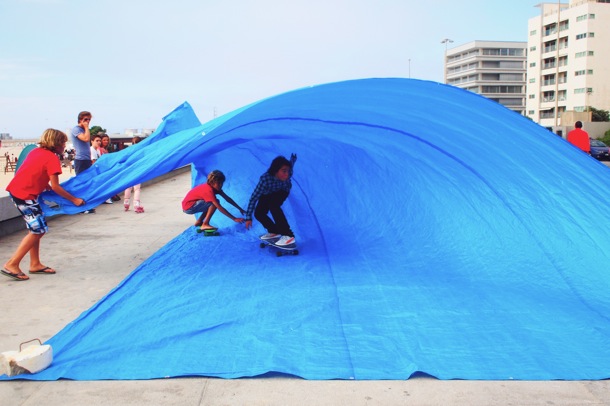 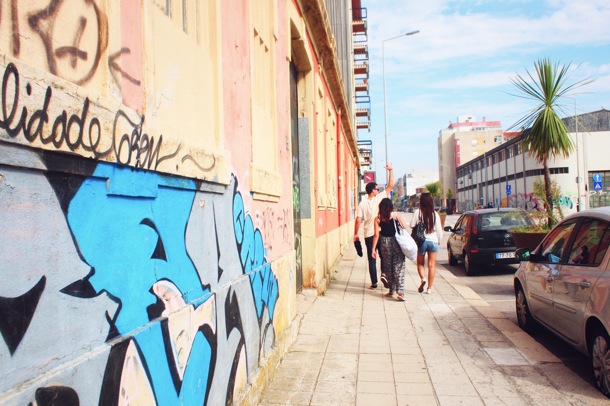 And that concludes part one of Sunday.

Next up: Port wine cellar tour and more gorgeous pics of Porto!

Your happiness/excitement is contagious! That beach looks super gorgeous! <3

i know for a fact that i would just suck at surfing! and this looks super beautiful, so so so jealous.

Wonderful photos! So full of sun and joy!
Thank you so much for wonderful comment.
Gladly followed your amazing blog.
Have a great day!