My flight to Napoli/Naples to meet Joyce (who was coming from Rome) was at 6am on a Monday. Guess where I was at 2am the same day? I’d JUST got home from Lovebox Festival AND I hadn’t finished packing. But I made it.. my local taxi company knows me well now ;pTo get to the little island of Stromboli, you can get a hydrofoil (5 hours – €80) or an overnight ferry (10+ hours – €40 – 60 depending on whether you get a cabin or deck ticket) from two ports in Napoli. There are services that run from Sicily as well, which is closer to all the Aeolian islands and therefore cheaper.

Getting of the plane at Napoli Airport and feeling the bright HOT sun on my face was like stepping into HEAVEN! Trust me, coming from a long-time-summerless place like London, you’d feel the same too. My love-affair with Italy was immediately rekindled.. and it was so obvious on my grinning face as I waltzed through passport control. Yeah, you just walk past an officer who’s busy chatting with his colleague but pretends to look at the details of your passport, which you hold up in your hand.

Transfers between the airport and Napoli Centrale (main train station) cost €3 one way on the Alibus. I had 1.5 hours to kill before Joyce’s train got in, so I had one of my favourite things in Italy – gelato nocciola (hazelnut ice cream). It was soooo gooood! 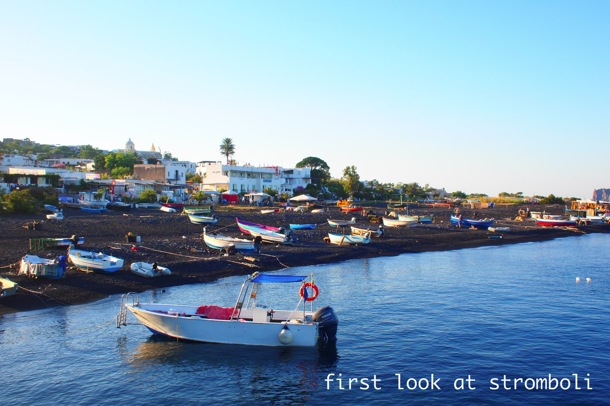 When we arrived, the island was bathed golden from the sun that was setting behind it.

Last year when I got kicked out of that farmhouse in France and ended up travelling alone in Europe for two weeks, I met an Argentinian girl in Florence. I was determined to try the local specialty, ‘Bistecca all a Fiorentina’ (Florentine steak).. which is served in 1kg portions, and so I recruited Ana and another Brazilian girl to share with me. Ana told me she had just come from a beautiful place, where she only intended to stay for 3 days but that became 10 because she simply couldn’t leave. She said she would only give me the details of this place if I promised to go. Me being impulsive and adventurous, I says ‘yes, of COURSE!’.

And so.. that’s how we ended up on the little island of Stromboli (it only has a resident population of 400 or so and frequented mostly by Italian tourists). 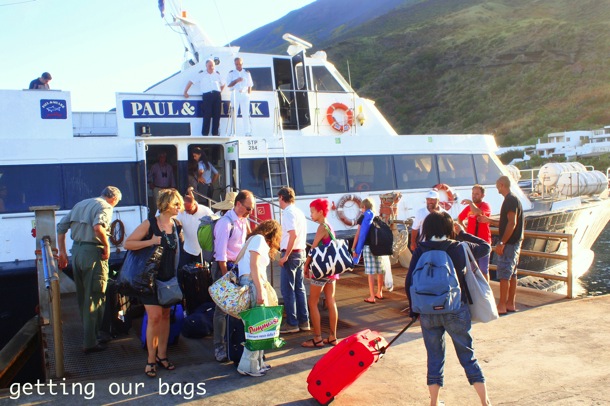 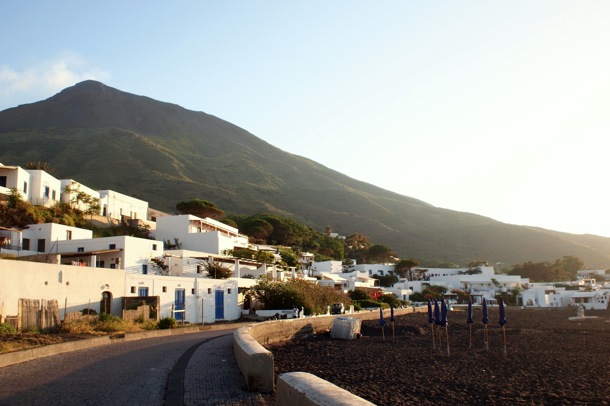 Thinking we should save some money and walk to our accommodation rather than hire a taxi, we lugged our bags along a lonnnggggg path. And boy was it LONG. I think it took us over 30 minutes in total, and we arrived panting and sweating from the heat (it was at least 30 degrees).

But on the plus side, it was rather interesting to walk through the very narrow lanes and look at cute little buildings, flowers, and colourful things. 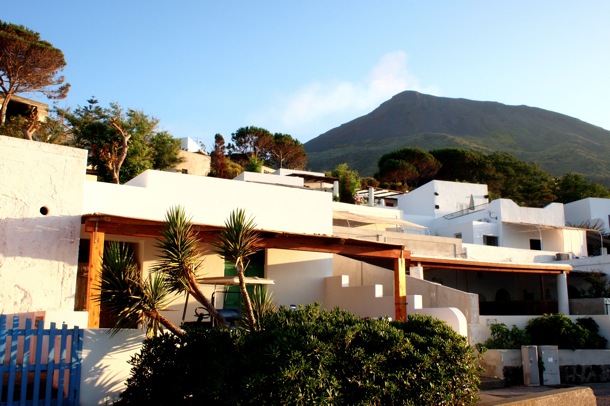 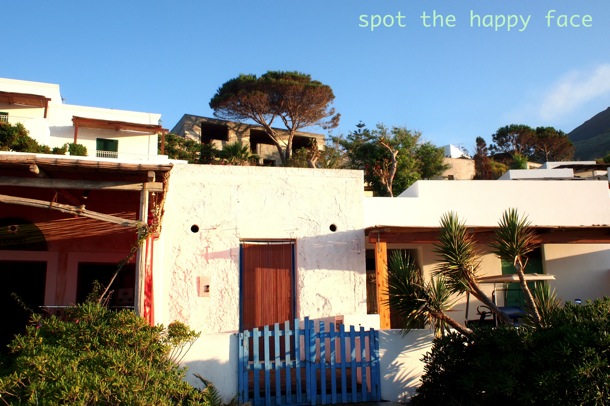 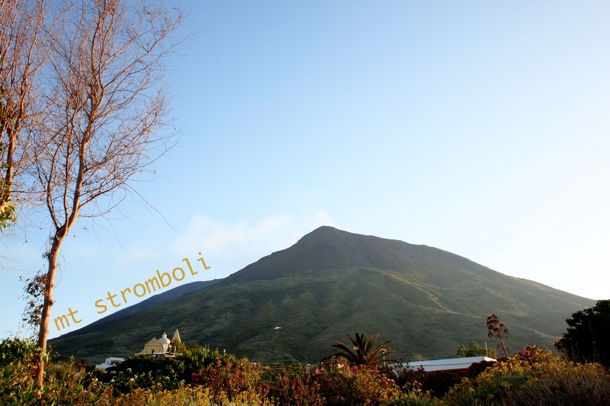 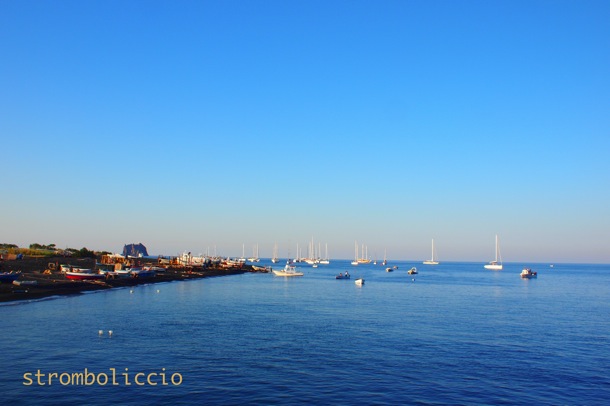 That little islet on the left side is Strombolicchio (please excuse the typo in the pic! I was sleepy!), a volcanic sea stack. Don’t know what a sea stack is? An popular example of sea stacks is the 12 Apostles along the Great Ocean Road in Victoria, Australia (though the last time I was there, in 2006, only nine were left standing).

‘Strombolicchio’ in Italian actually means ‘Little Stromboli’, but in fact, it is a remnant of the original volcano that Stromboli island was built upon. Apparently its eruptions stopped some 200,000 years ago and volcanic activity moved 3km south-west. With the rising sea level over time, the current composition of Stromboli was born. 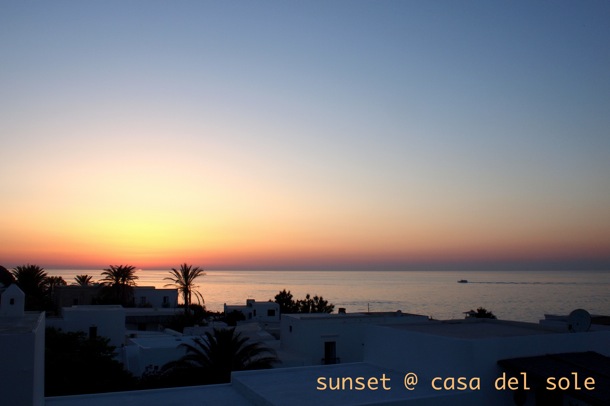 We stayed three nights in a private double room at Casa Del Sole, also a recommendation by Ana.
Francesca, who runs the place, is really friendly.. although she does tend to disappear into her big house next door sometimes and can be difficult to track down!

There is a roof terrace upstairs. After leaving our luggage in our room, we clambered up and noticed that the sun was setting.. so we RAN DOWNSTAIRS, grabbed our cameras and rushed back up. Even though by then the sun had JUST gone under the sea line, it was still so pretty. 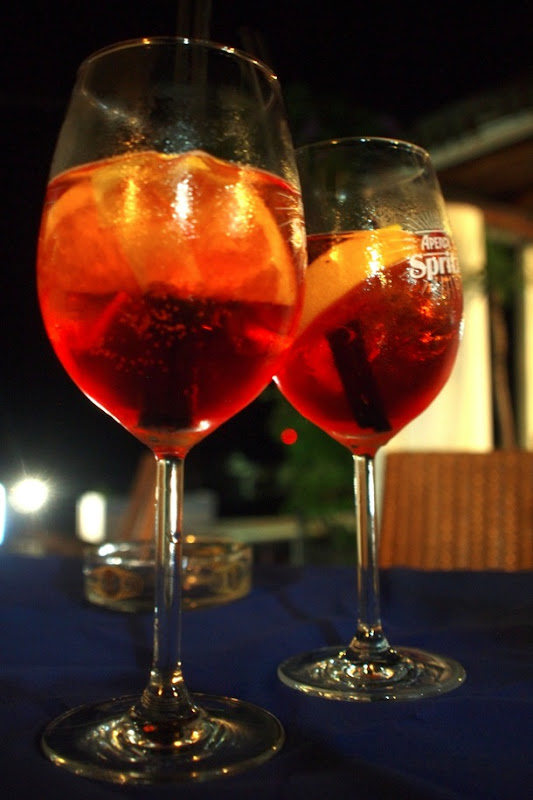 Dinner was had close to the port. Stromboli does not have any street lights installed, and so after sundown, people walk around with flashlights, otherwise it would be almost pitch dark.

I had a popular Italian aperitif, Aperol Spritz, followed by calamari linguine. Joyce had shrimp pasta – the shrimp caught around the island were a type I’d never seen before. They’re tiny – about the size of a 20p coin – and cooked with the shell on. The shell is so soft/thin that you’re meant to eat it altogether. I found it quite tasty!

After dinner, we endured the 25-minute-or-so dark walk back to our room with the aid of an iPhone flashlight. I’m certain this walk took a lot longer.. because the night sky was absolutely MAGNIFICENT. We couldn’t walk for two minutes straight without craning our necks to look at the stars and we wondered how it might be possible to see ALL the stars at once. I wished I had eyes on the sides and the back of my head.

When Ana told me about Stromboli, she said she often stared at the sky. And now I know why! The sky was so incredibly dark/clear that you could see just how bright the stars REALLY are. They were so bright that there were illuminated patches in areas where the stars were more concentrated. It was truly the most beautiful night sky I had ever seen in my life.

At the Casa, we spent a good half-and-hour lying in the deck chairs up on the roof terrace just to stare at the sky some more. It was so surreal that I almost felt as if I was floating in space, surrounded by glittering stars. Oh yeah..we saw three shooting stars in a row, can you believe it? 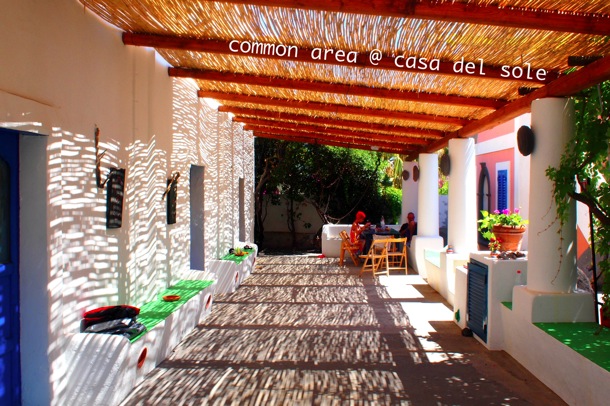 I really loved the place where we stayed. It was like a big happy house with different types of rooms spread over two levels/two buildings connected by the outdoor common area/dining area, kitchen, and communal bathrooms (each unit had its own sink, toilet, and shower). 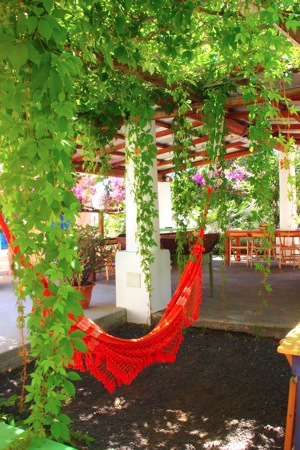 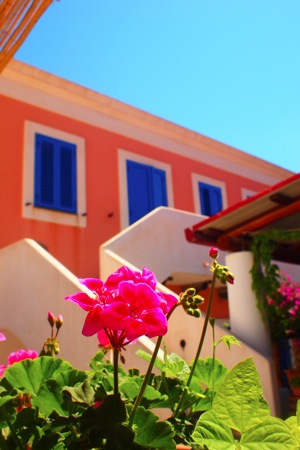 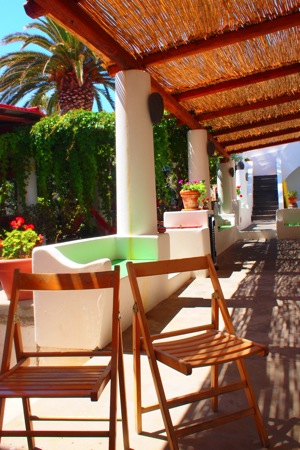 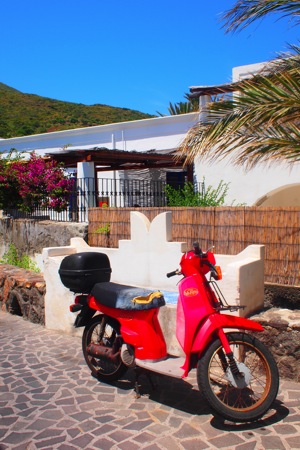 The next morning – me after having caught up on some SLEEP – we had a simple breakfast in the kitchen and went out to explorrrre.

I think we were only two minutes out of the Casa and we were already stuck taking photos of everything around us. Everything just looked too pretty. The sky was bright blue without a sign of any cloud.. there were flowers and strange plants all over, and it was so very quiet and peaceful. 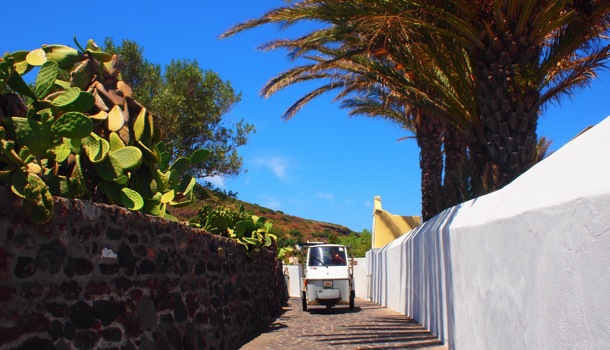 There are no cars in Stromboli (they simply wouldn’t fit into the narrow lanes). Instead, they have these tiny three-wheeled things that look like big toys, or golf buggies. 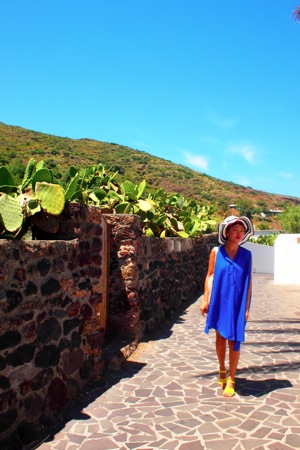 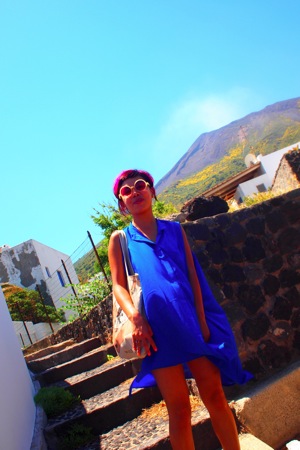 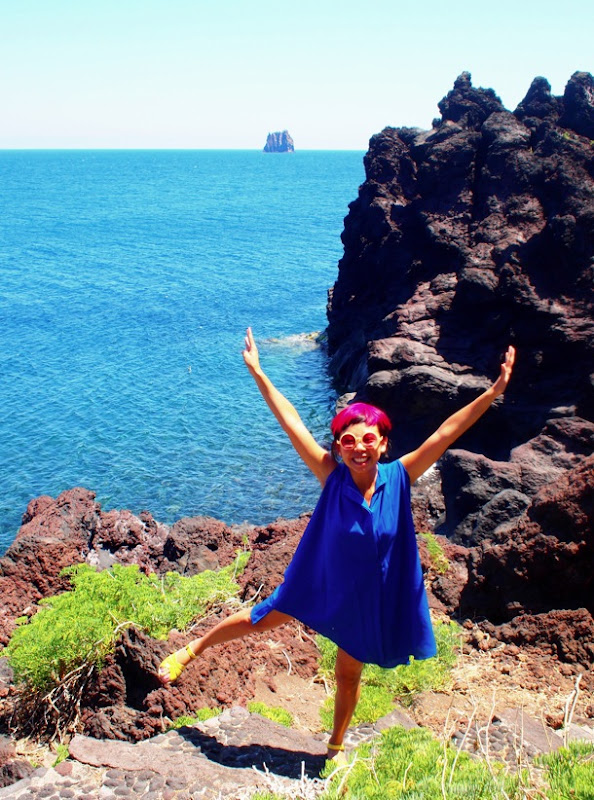 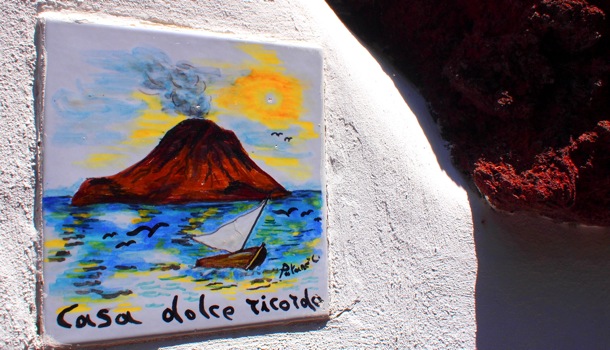 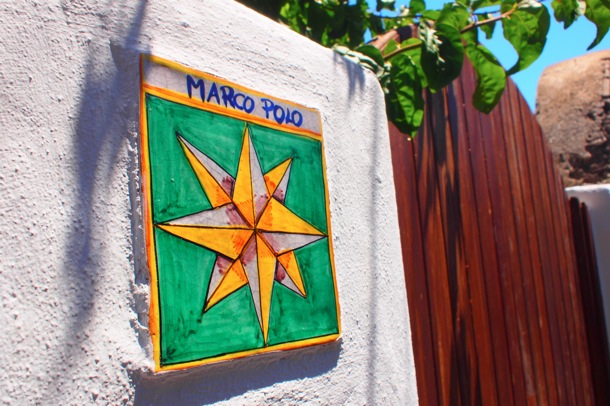 Many of the buildings in Stromboli have colourful painted tiles on the outside to display their names. Naturally, the volcano is a popular and recurring theme! 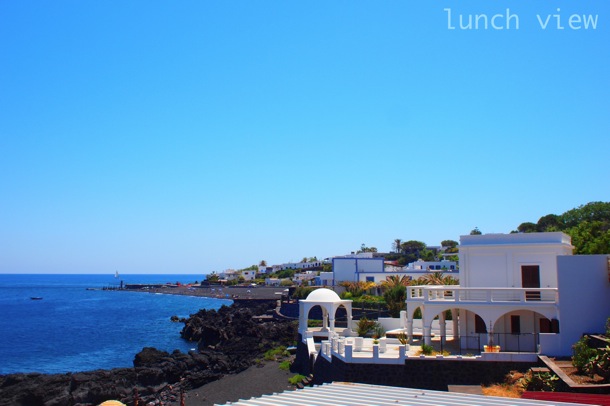 On the way to the beach, we came across a hotel called Villaggio Stromboli with a terrace cafe/restaurant overlooking the sea. Still hooked from the night before, I had another Aperol Spritz – amazing in hot weather! Joyce and I played with her little pink kaleidoscope and… 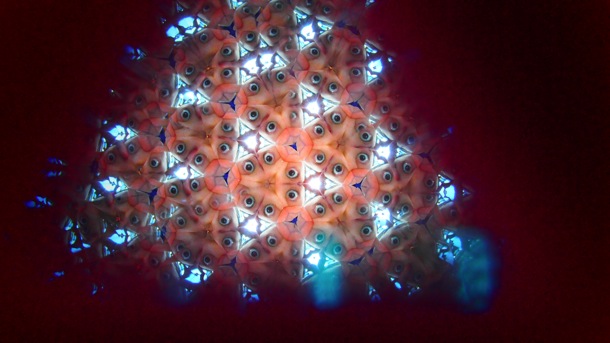 …ended up with this funny photo of my eyeball. Amongst others. 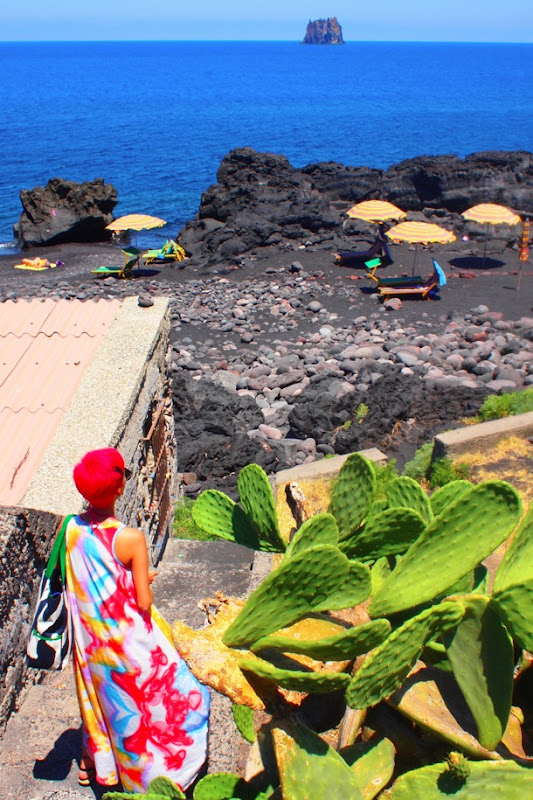 Undoubtedly the most colourful person on the island that day.. luckily most people had their sunglasses on when they saw this human watercolour palette. 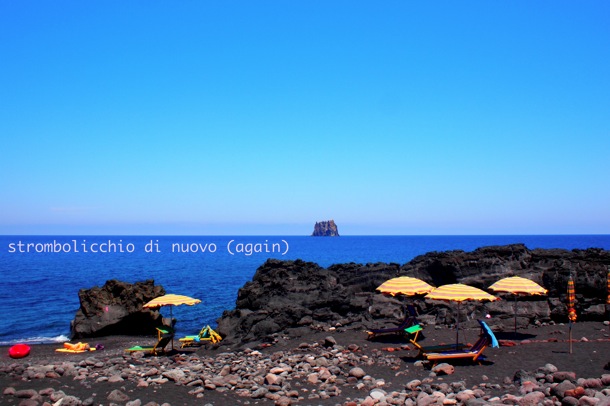 If you look closely just above the horizon, you can see some faint pink lines. Isn’t it pretty!
We spent the afternoon at the beach. Obviously, the terrain is rocky and composed of black sand as it’s a volcanic island.. making it rather tricky to find a comfortable spot! 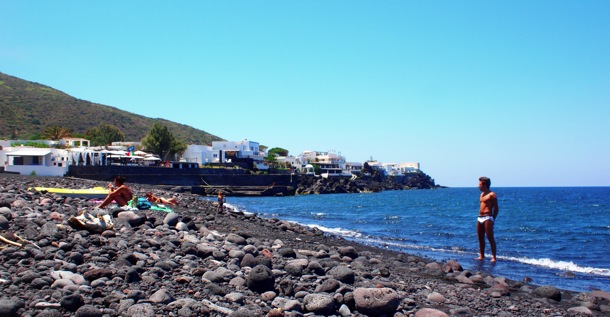 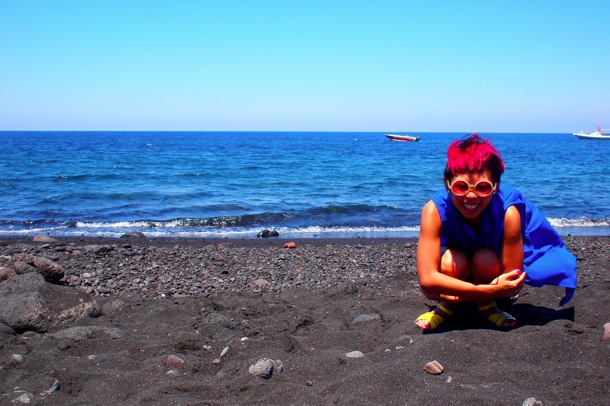 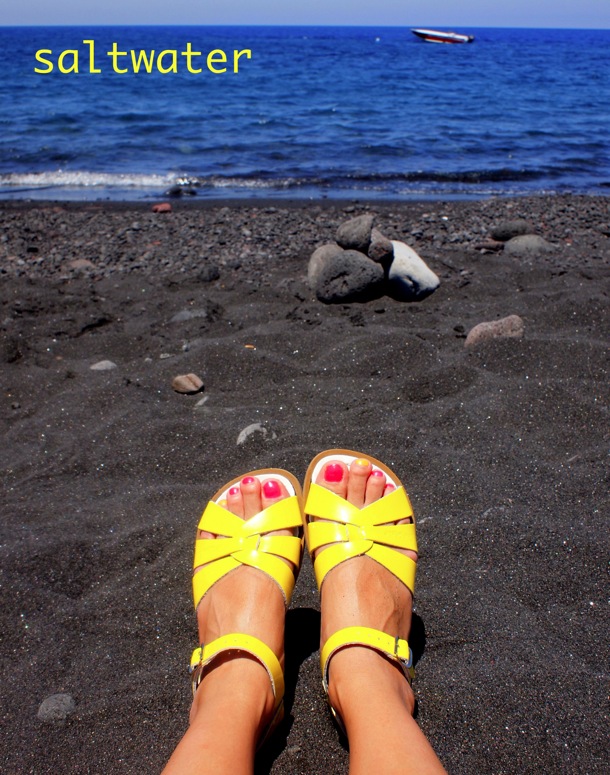 I am completely in love with my new SaltWater sandals. I ordered them in the States and was so lucky to have them brought to me in London just in time for my trip. They’re the most comfortable pair of sandals I’ve owned so far. I’m hoping to get them in hot pink and lime green next…! 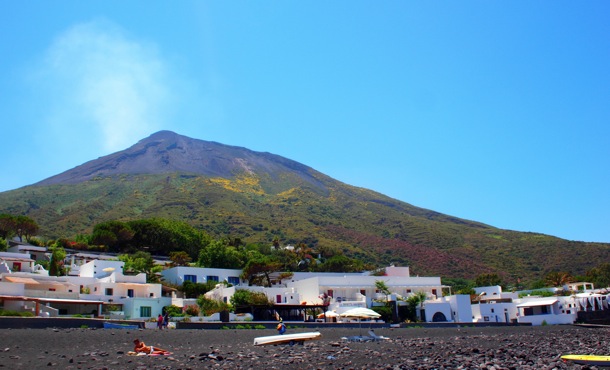 Sometimes we would hear something rumbling/roaring quite loudly.. no biggie, just that VOLCANO  erupting behind us, you know.. 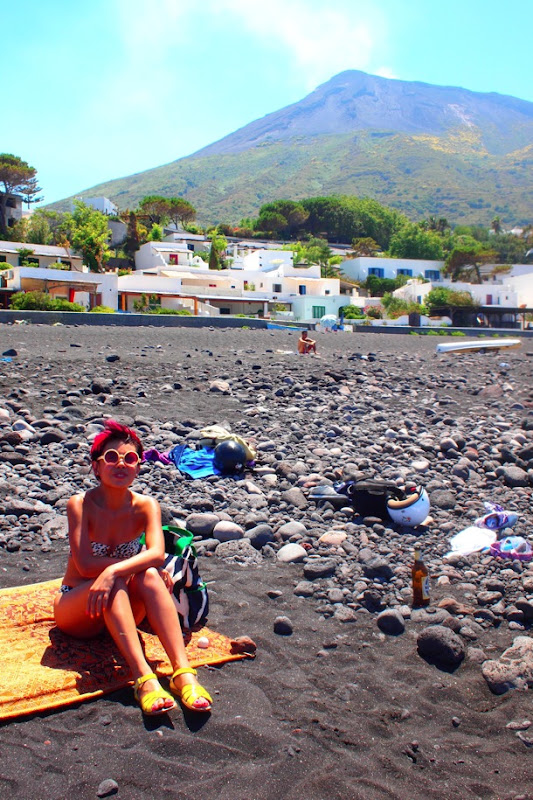 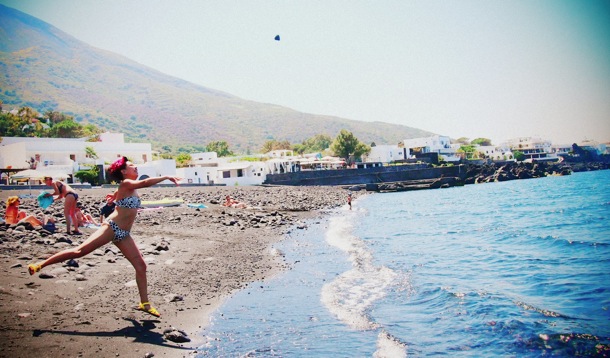 My bikini is by H&M.

One of my fav beach activities is throwing rocks into the sea! Thanks Joyce for this great photo!

If you’re wondering why we always had our footwear on.. it’s because stepping on the sand was like stepping on HOT LAVA.

I want your life! So colorful & so full of amazing trips!

Oh my gosh this look amazing! You’re so lucky to travel so much. 🙂

Fuschia saltwaters are now on sale on Modcloth! USD19.99, cheap as chips! I love saltwaters and obviously ordered them in a heartbeat! Love your pics, Italy looks gorge!

Ah it really looks like so much fun!! I’d love to go there.

And I am using a 35mm f/1.8 lens. Don’t really know what you mean with the flat effect, but I always edit in photoshop CS5, mostly using the curves (and levels) 🙂 x

stunning pix. love the one of joyce. u have very interesting EYEBALLS too. <3