My third stop in the Algarve after Albufeira and Sagres was Lagos, a little town known for its buzzing nightlife.Despite being rather upset about having to leave surf camp, I was excited to check out my next hostel – Bura Surfhouse – because of how much fun it sounded. I’d heard a lot about its rooftop bar and pool.. parties and BBQs..

At this point I was really starting to enjoy hostelling! It was kind of my first time properly staying at hostels while travelling so it was kind of novel.. and amazing. Thanks again Hostelbookers for the opportunity! 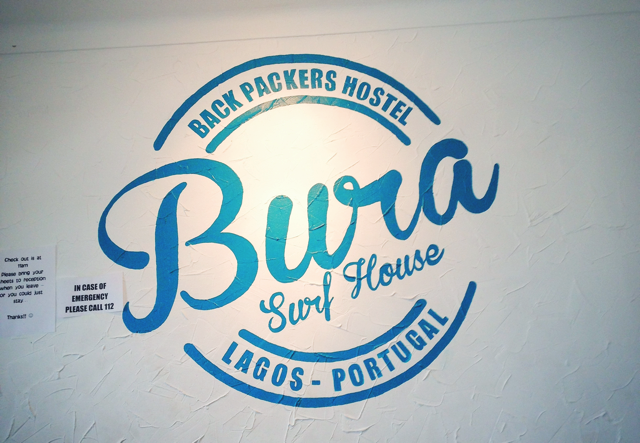 The lovely people from surf camp in Sagres gave me a lift straight to the property in Lagos. But Bura provides free pickups from the bus or train stations anyhow, if you need.

The location is slightly out of the city centre but close enough that you can walk.. for 20 minutes or so.. this of course was ‘very long’ to me but I managed and I survived! It’s not so bad when you’re walking in such a beautiful place and in good weather 🙂

Also, there’s a large supermarket just five minutes down.. which I visited not long after I arrived to satisfy my Portuguese snack cravings. 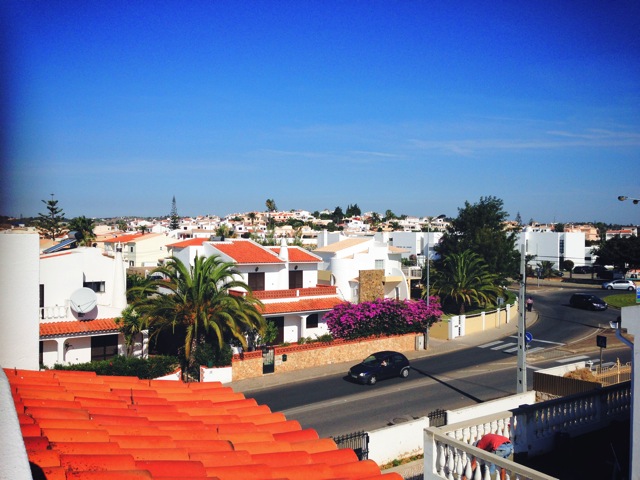 ^View towards the front of the house.

Not unlike my previous accommodation, this hostel was like a big house shared by friends. It’s on a street lined with other houses (where I presume normal people live).

Heather and Matt, who are originally from the UK, loved Lagos so much that they decided to buy this house and set it up as a hostel. And it’s fab! 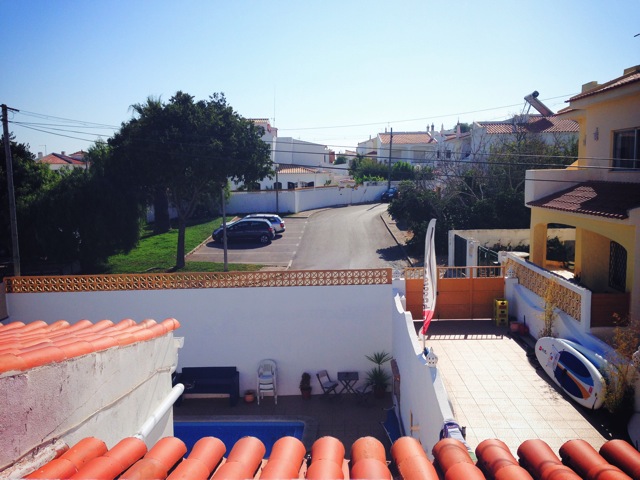 ^Looking towards the back entrance. 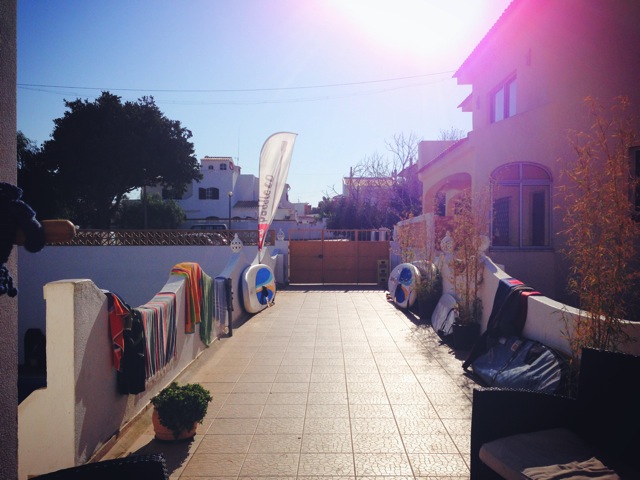 One of the highlights of the place, I had read, was the stand up paddling course you could do with Heather, who had recently qualified as an instructor. So I asked if she could kindly take me one day.. I had never tried it and well you know me.. I like to try everything and anything. Especially if it involves water!

Of course, you can also sign up for surfing lessons if you preferred. 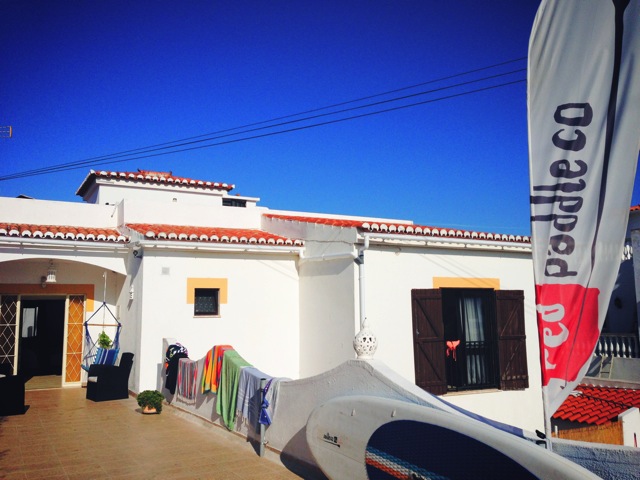 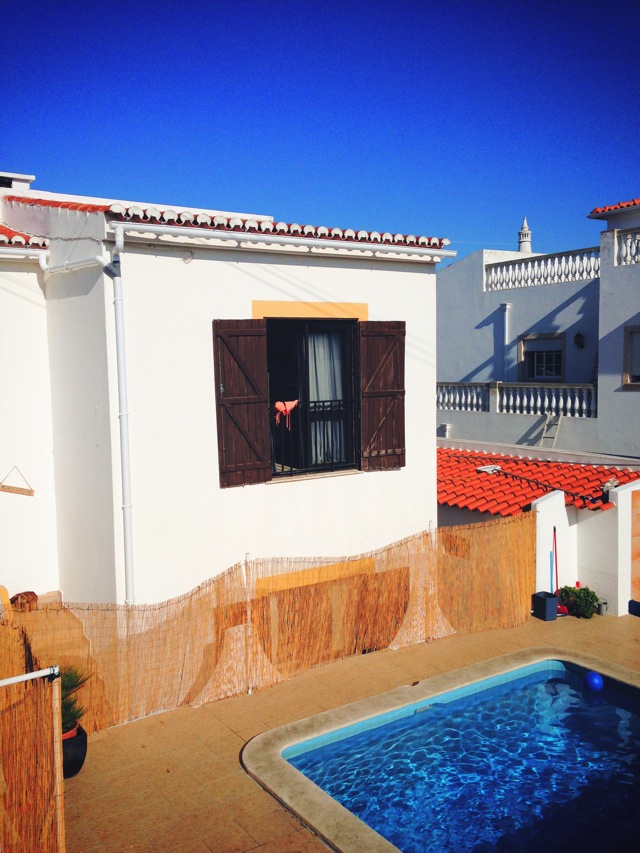 ^The window you see is from the room I was placed in! That orange thing is my bikini hanging to dry.. haha 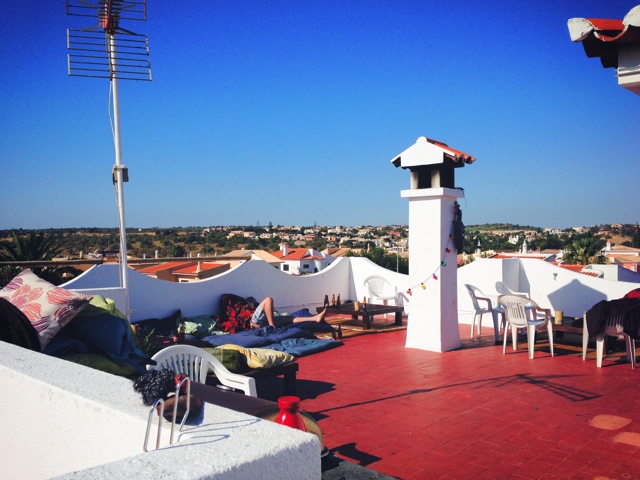 I found this dude who had spent the whole night sleeping on the roof until the blazing sun came up. Clearly he was roasting but refused to leave.. 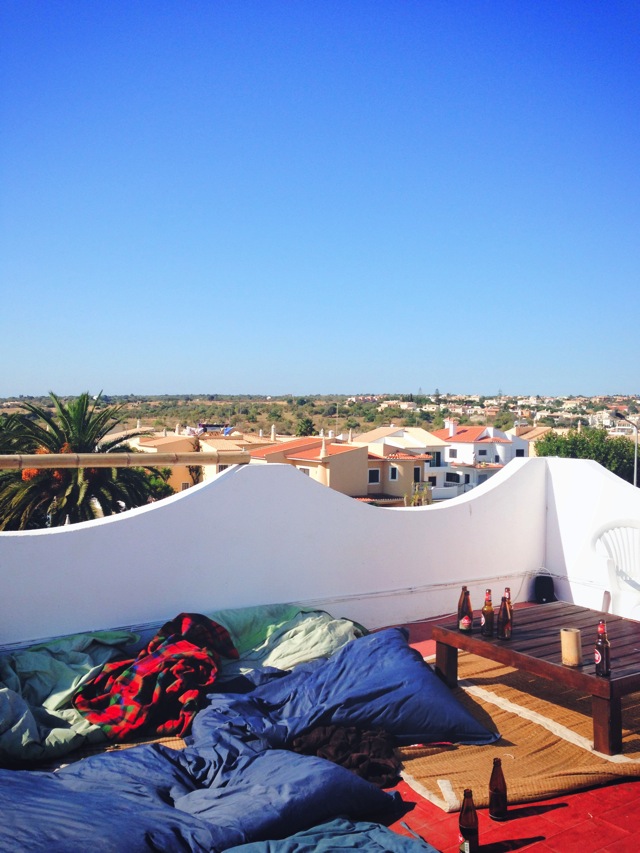 …Until I appeared and started taking pictures, that is. Sorry to have made you feel uncomfortable, random guy! 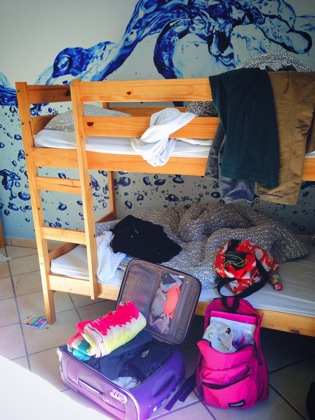 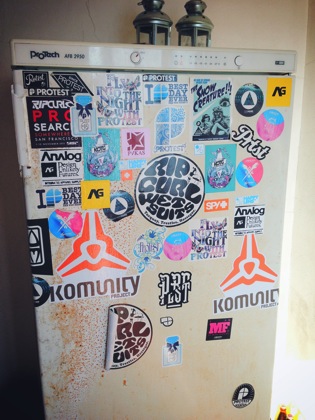 I was given a bed in a six-bed dorm.. but I must say the room was huge. There was so much space! I stayed with a few boys.. and I was so lucky that none of them snored. Seriously.. NONE of them. Either that or I had somehow gone deaf while sleeping.

What you see there on the bottom bunk was all my luggage for my 2+ weeks away. I placed an image of the Bura fridge because I thought the colours went with the colours of my bags…. 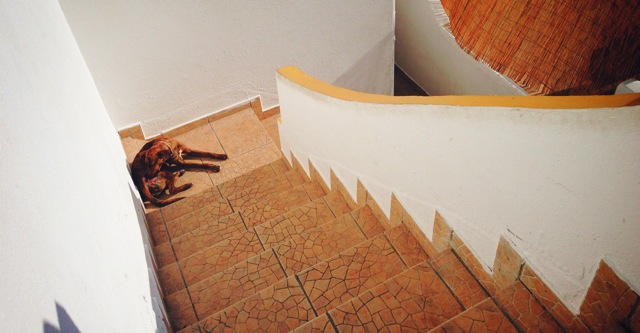 ^The resident dog – sorry dog, I forgot your name.. 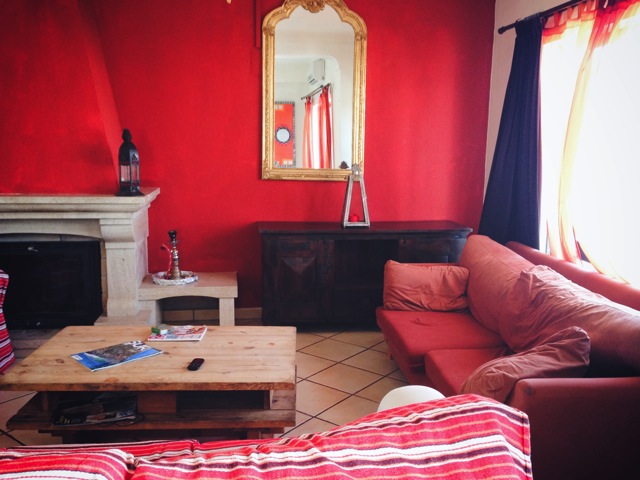 ^Comfy living area for all your lazing needs 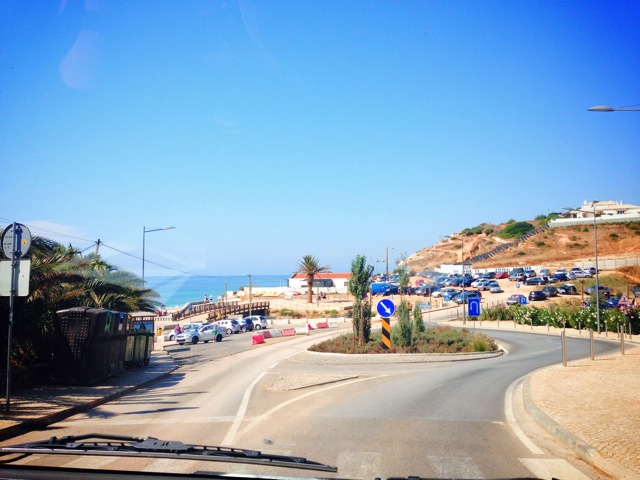 As I was blessed with such perfect weather…and as the sun loves me so much, the conditions were good enough for Heather to take me out for a lesson the next day. We took the van down to Porto do Mos beach. 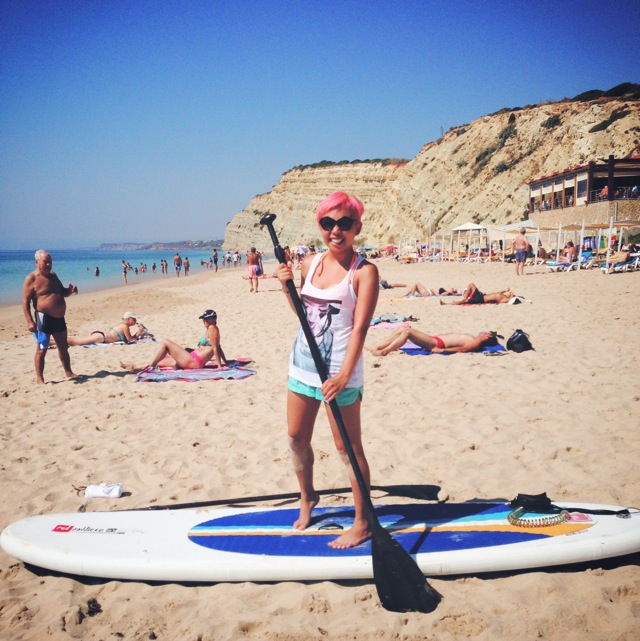 I have to say the hardest part about the whole experience was carrying these gigantic boards down from the parking lot. They were SO BIG! Or perhaps my arms were just too short but whatever.. they were heavy and large. I guess that was my warm up.

We went through the basics in theory – how to hold the paddle the correct way, for example – on the sand for a bit before going into the water. I couldn’t wait cos it looked so, so inviting. 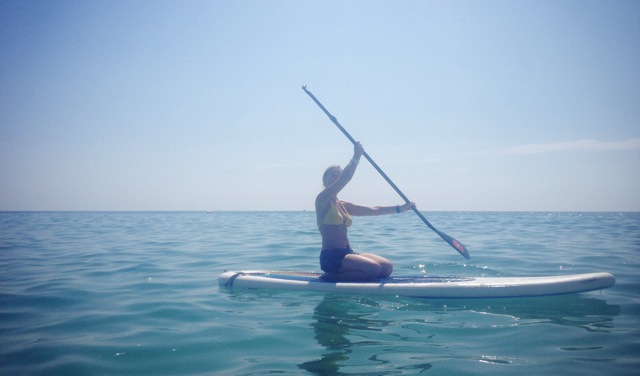 Most of the time, I paddled whilst on my knees. I did stand up to do it a few times.. and fortunately I didn’t fall once (I was worried about my pink hair, which had just survived a battering few days at surf camp prior). 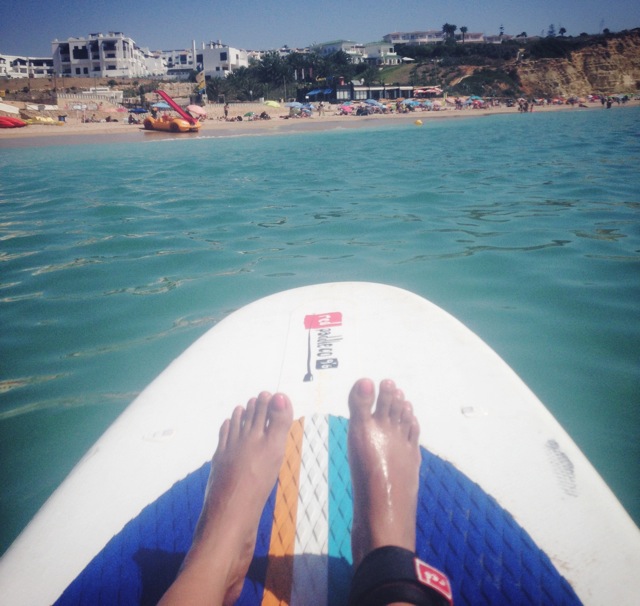 I enjoyed just sitting on the board and cruising along with the paddle.. perhaps because I was lazy. But it was so relaxing and serene. We chatted about random stuff and travel stuff.. and before I knew it, an hour (or two?) had passed and it was time to go back. 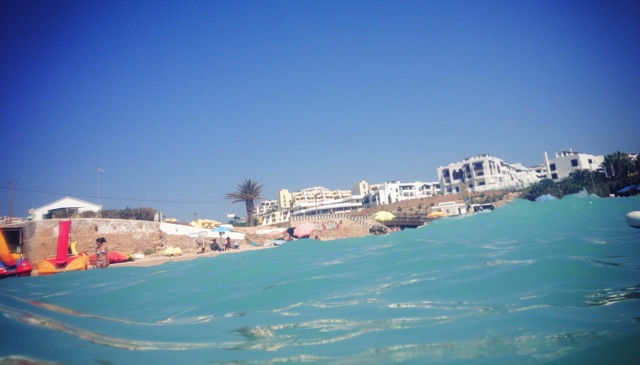 Here’s a little Instavideo I took in an attempt to take you swimming with me
(btw, follow me on Instagram please!):


I have to say that stand up paddling was a lot harder than I anticipated. I mean, it LOOKS so easy! I think I did well, but it was definitely a challenge staying upright and keeping balanced. My legs were wobbling a lot of the time….. forcing me to use my never-really-used muscles. Haha.

THANKS Heather for the wonderful introduction to SUP.. I genuinely enjoyed it!


Nights at the house involved mostly drinking and lounging about. One night, I brought my light up toys, kaleidoscope glasses, and glow sticks down to the pool so everyone could play with them. Toys are for sharing! 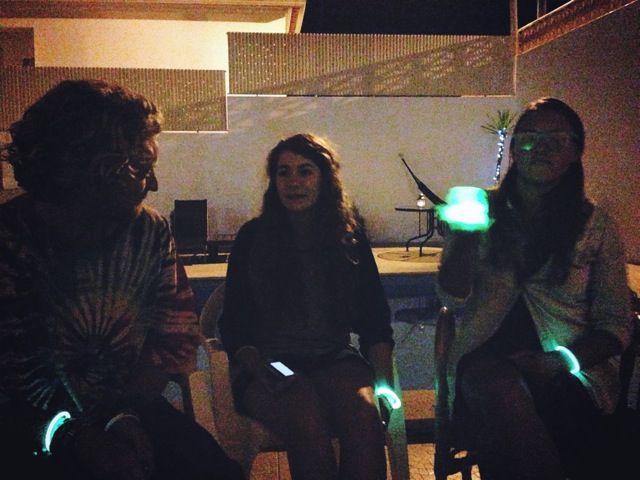 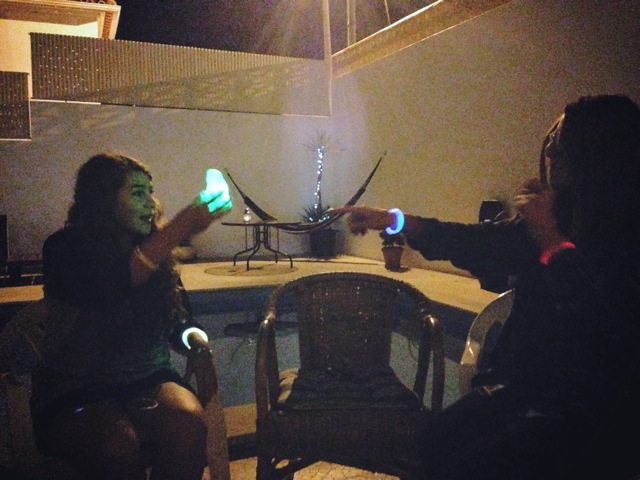 Everyone at the house, staff and other guests alike, were really friendly. I noted that there were quite a number of Australians.. (I love them!).

I’ve got so much more to share about my time in Lagos but that’ll have to come in another post.

Nights at Bura Surfhouse can be booked via Hostelbookers, and prices start at about £15pppn. Yes, there is free wifi internet!

Wow, that hostel looks welcoming, very friendly and do I love the rooftop 😉 I bet you can sleep under the stars!

I so want to try SUP! I’ve already conquered my fear of Kayaking, so this is my next challenge.

Love the video and sound of the waves 😉

Glad you had fun in the sun!

Thanks Karla.. love you! x