As some of you MAY already know, I have been in South-East Asia for the last four weeks. I’ve spent most of my time in Malaysia being with my family, whom I see about once a year on average.Earlier, we went to Krabi for a few days to catch some rays (in addition to the millions already caught in Malaysia) and for most of the trip, we stayed in Ao Nang at Emerald Garden Resort. It’s not located on the main strip which runs along the coast, but on a street off it..

At first I was a little bummed to be moving there from the amazing Holiday Inn Resort but.. WOW IT WAS SO GREEN AND BEAUTIFUL FULL OF PLANTS AND oh it was just so green. 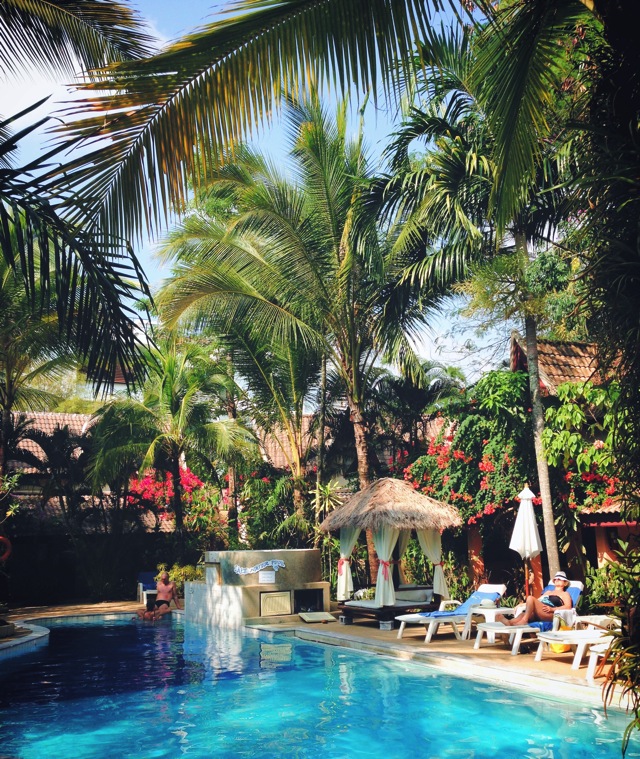 It boasts two pools.. each one is relatively small, but set amongst tall palm trees and.. more palm trees. Haha! 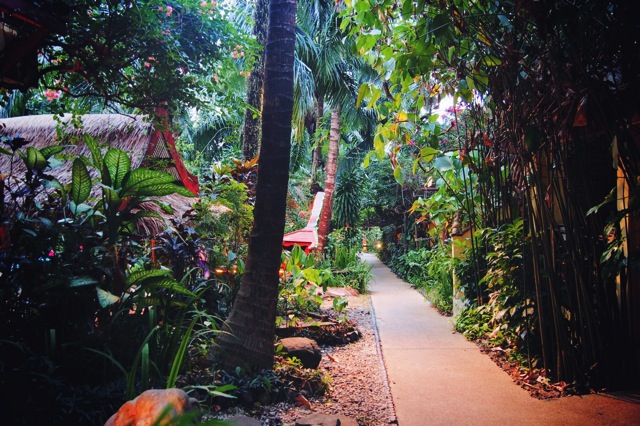 They provide chalet-style accommodation. It’s really like a little paradise village where the walkways/paths are the streets. 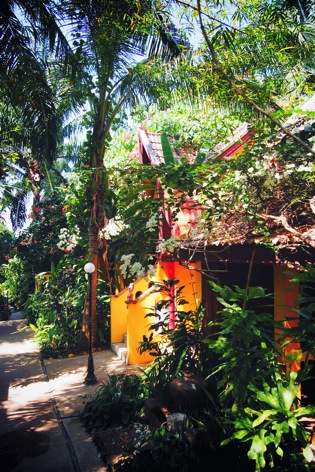 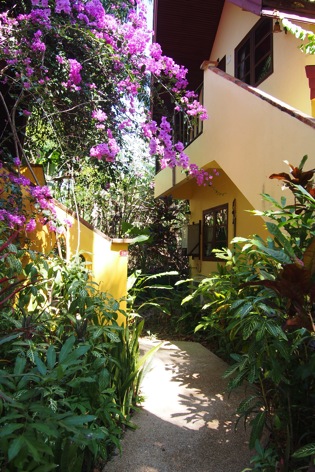 The yellow building was our (mine and my sister’s) room.  Look at all the flowers and.. erm.. palm trees!

The rooms are not fancy and do not boast any luxury benefits such as cable TV or a built-in multi-phone-charger. But they have all the essentials and are comfortable and clean. Except that one morning, I found our bathroom had been converted into a communal home for a thousand wasps overnight. Luckily, I’m not afraid of insects and anyway, they died a couple of hours later.. further converting the bathroom into a wasp cemetery. I was not really bothered.

Rates start from €69 for a standard double room – during peak season this is €160.

More info on their rooms here. 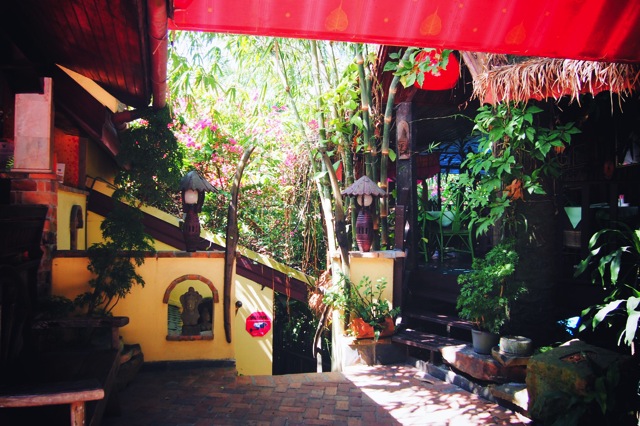 This is just beside the reception, on the right leading to the restaurant and in the middle you’ll see a little opening to the stairway that takes you down to the pool area. 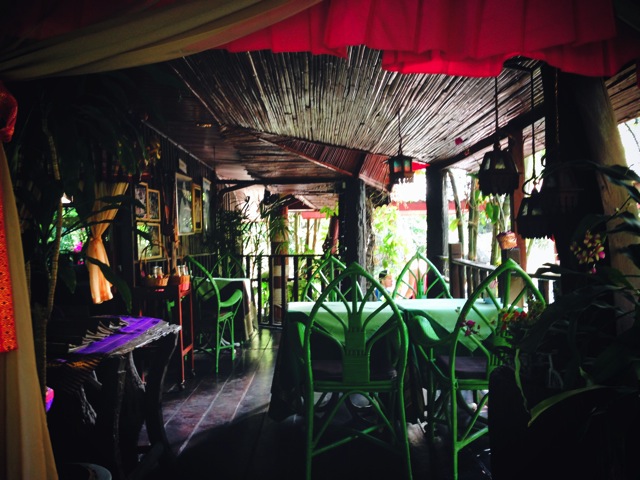 Even the restaurant is green and cosy! 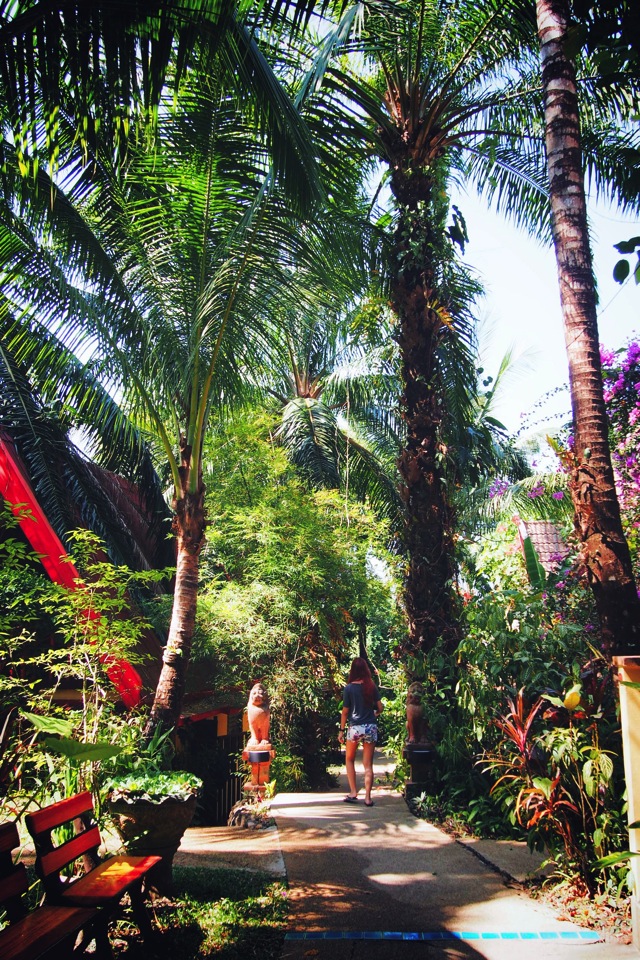 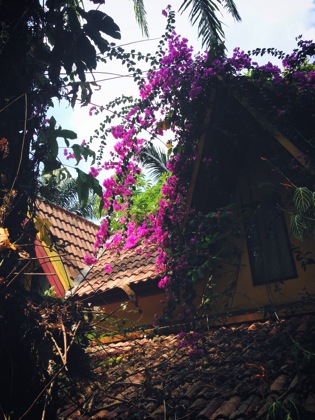 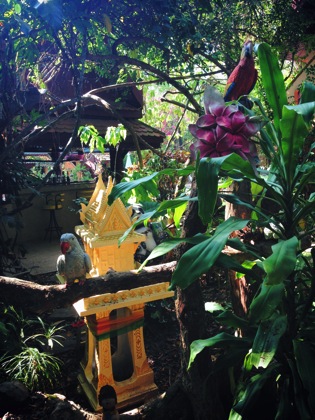 There are little things scattered all over the place.. it was rather quirky in a sense. Like these birds above! 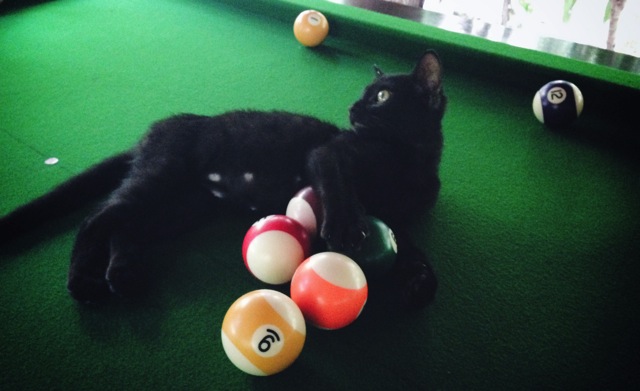 There was a little black cat that was always roaming about. He was surprisingly friendly and extremely playful! We put him on top of the pool table and let him play with the balls. Soon after, we got told off by one of the staff. 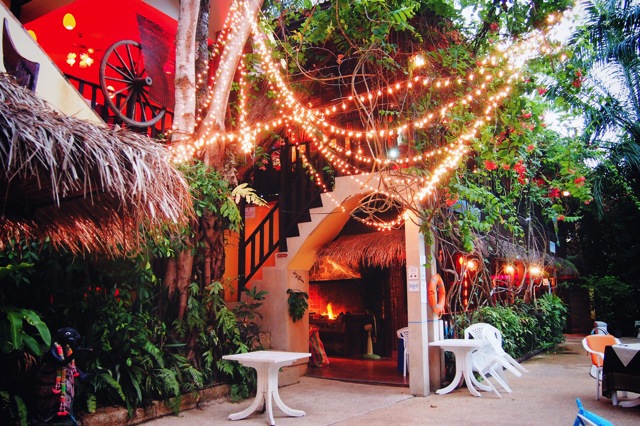 When the sun begins to set, the lights are turned on and LOOK how magical the place becomes! The pool is on the right side in this pic. 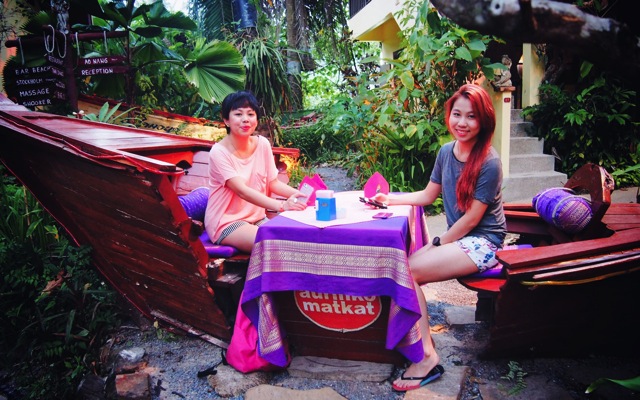 ^My sister and I. 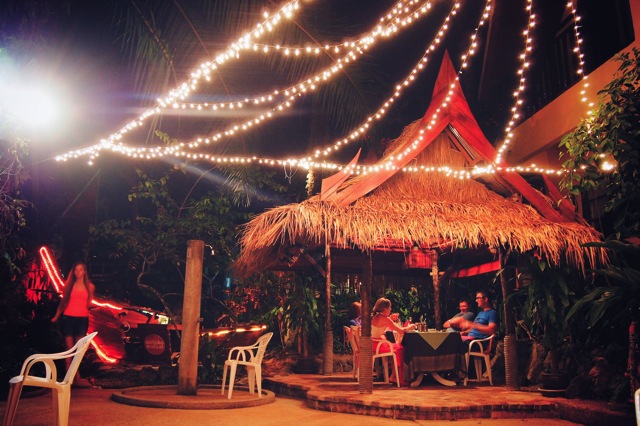 Every time we had time to spare at the resort, we would be lounging by the pool because it was the prettiest place to be. Erm, and also there was no wifi in the rooms….. Hahaha

I admit I think I spent a bit too much time on my gadgets.. but I had just gotten a new retina-display Mini Apple iPad from Argos and it’s fab! 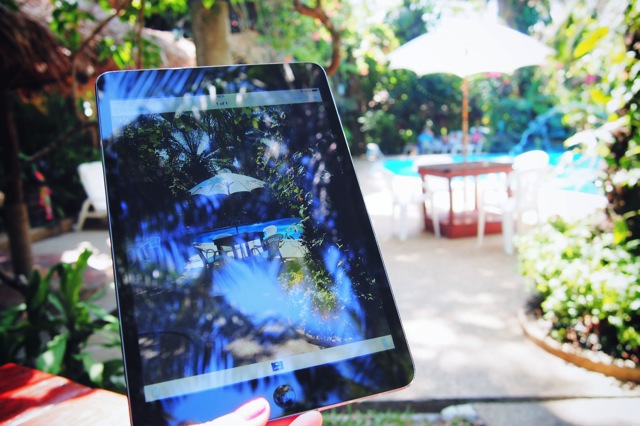 It replaces my old iPad 2 and it’s a better size for little me.

I’ve been addicted to this zombie game called Dead Trigger 2. The gameplay is awesome and it’s so much fun!!! It also gets my heart pounding.. sometimes. 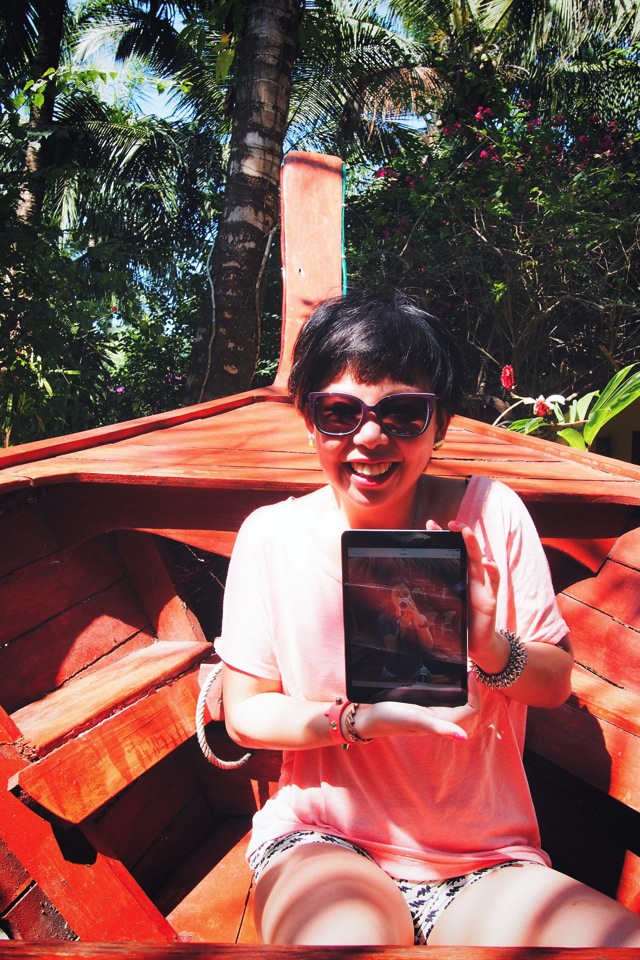 It suits me, right?? I think so anyway. 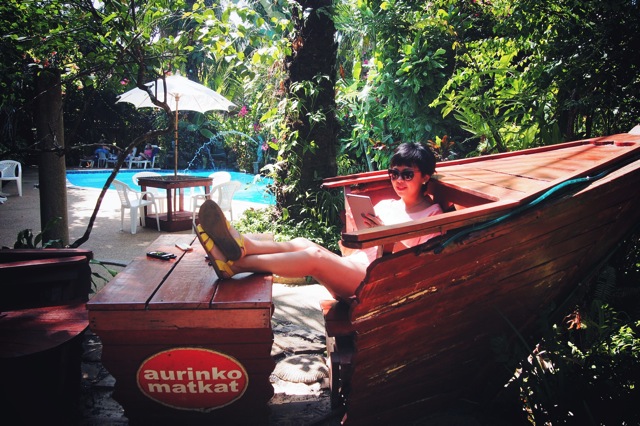 I downloaded some movies to watch on it during times when I was on the plane or bus but most times I was so exhausted I just didn’t bother. 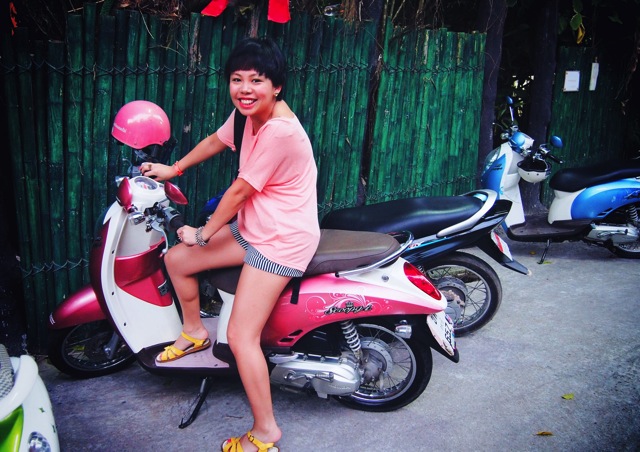 It’s exhausting sitting on other people’s scooters for a photo, for example. 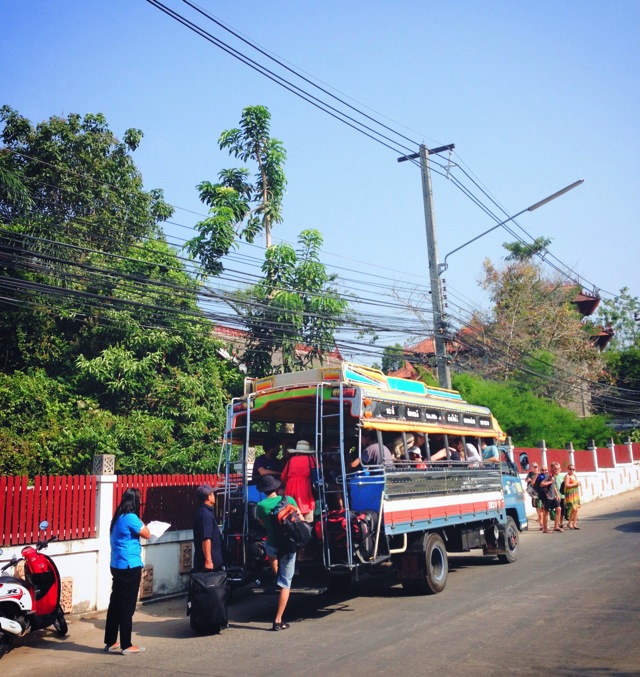 And it’s exhausting to see people squeeze into a tuk-tuk with their giant bags..  I mean.. it was SO HOT.

OH! I want to say a big thank you to the fantastic staff at Emerald Garden Resort for taking the trouble to send to me by post – free of charge – my set of earphones that I so carelessly left behind on one of the sun loungers by the pool. How efficient and kind of them.. I’m so pleased 🙂

That cat is just the cutest! x x

ooo how brightly colored and beautiful! Thailand is one of my dream destinations. Sigh.

It is so funny that just an hour after reading this post, a big dark ‘cloud’ was swarming in front of our open balcony doors. we had to rush to close them, since it was a colony of bees!!!! Pest control came some hours later and found a beehive which they eliminated.

I love your blog and the way you take photos! 🙂