What could be so scary and daunting about a desert safari that I had to use the word ‘braving’? Nothing really. But I was young and dumb – this trip took place in March 2008!OK perhaps not dumb, but it was intimidating because it was pretty much my first real solo travel experience. And I did it at a time when I was feeling very homesick. I had stopped over in Dubai for a few days en route to London from Malaysia after having spent a whole month with my family.. and I’ll admit, I ALWAYS cry when I have to say goodbye to them at the airport. Thus I was in quite a sad, rather lonely mood when I got to Dubai and although I was staying with a friend, she wasn’t there during the first few days.

I booked a place for myself on a desert safari.. and here are my photos from it!

You’ll have to excuse the poor quality of the images since I was using some kinda crappy compact camera of that.. era. 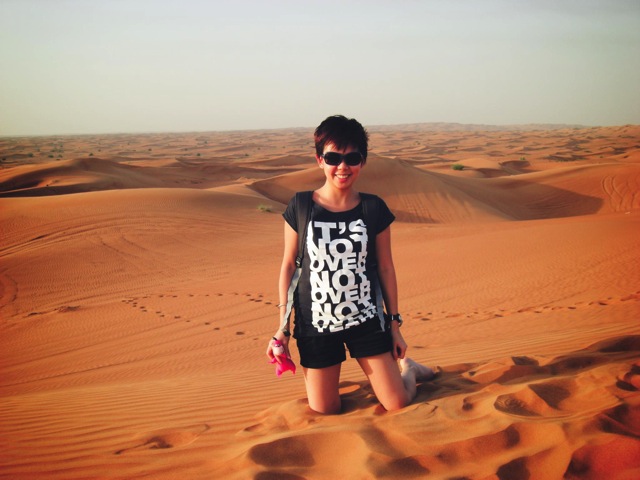 Looking back, I can’t believe what an amateur traveller I was.. but I’m also amazed at how much I’ve grown and changed since. I’ve invested so much in myself! This is what I tell my parents or people who question the amount of time and money I spend on travelling: “It’s an investment in MYSELF. Personal development!”

I am now awesome – I am confident, happy, and I can speak to anyone about anything.

Anyway, back to this desert safari.. I chose this day to write about as it was my favourite thing about my trip. Something I loved much more than the skyscrapers and all the other modern, shiny stuff that’s normally associated with Dubai. 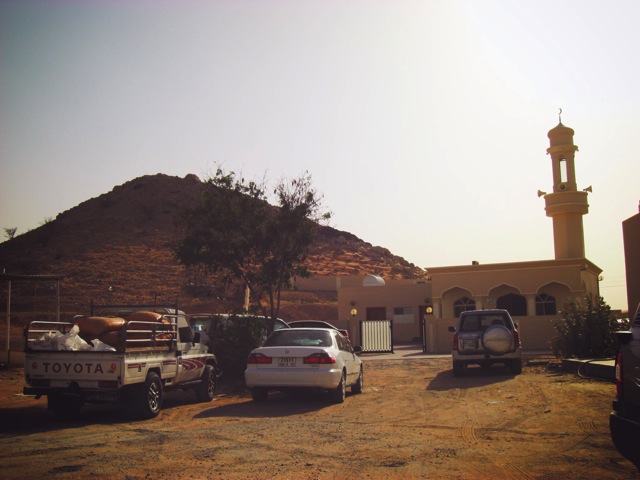 ^
^Just a scene along the way to the desert 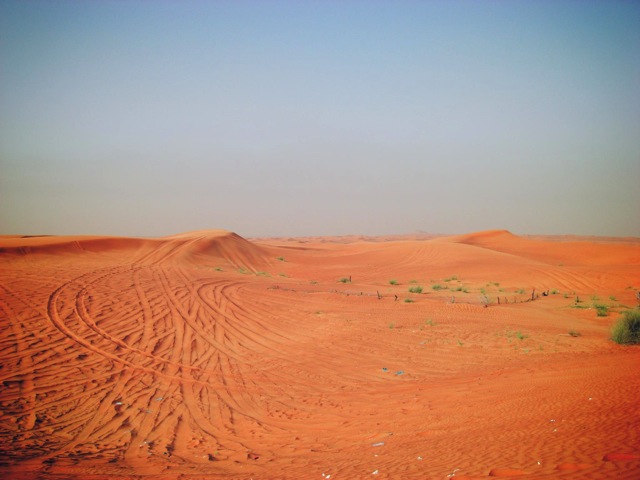 I was amazed by how… ORANGE it was! 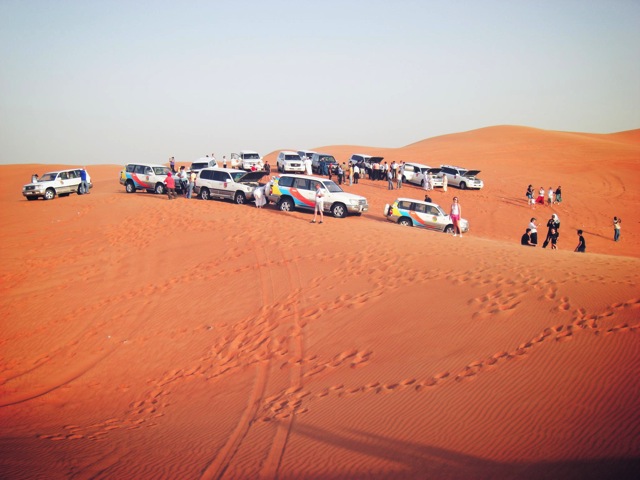 Once we arrived at the desert, the tyres of the cars (or jeeps?) had to be deflated before we could do the ‘dune bashing’, a.k.a. driving around the soft mounds of sand in a ridiculous, crazy way to produce as many jerky, rollercoaster-like movements as possible. Supposed to be fun! 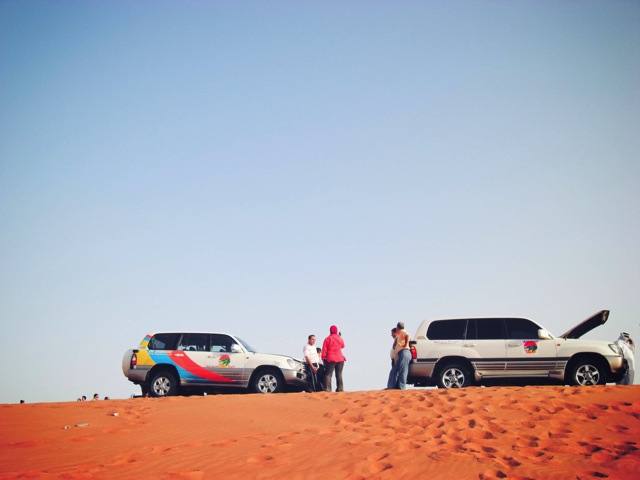 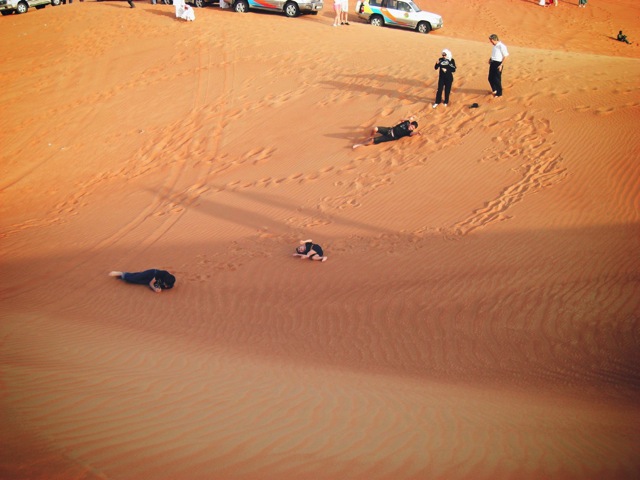 See! I’m not the only crazy one.. I was so pleased to see these people rolling down the hill, without a care about sand getting into their clothes.. or even their mouths. 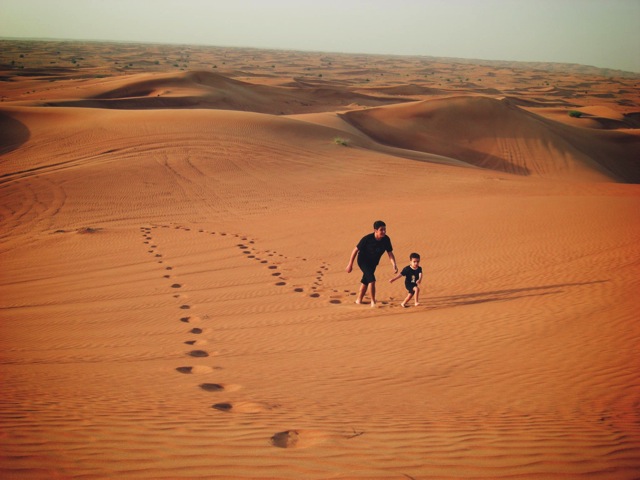 We had a chance to explore the area before the ‘dune bashing’ began.

I wandered around taking a few photos before sitting down with my own thoughts; shoes off. I remember thinking that just 24 hours before, I had been with my family. I don’t know why I thought that, because obviously it just made me sad again as I started missing them and wishing they were there to enjoy the beautiful view with me. But hey.. homesickness, it really takes over your mind (and your heart) when you have it. 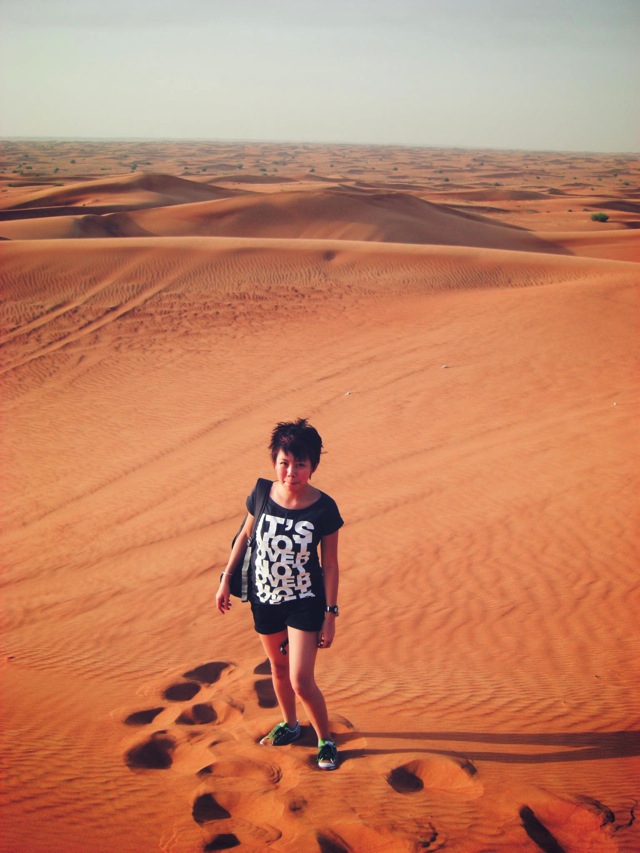 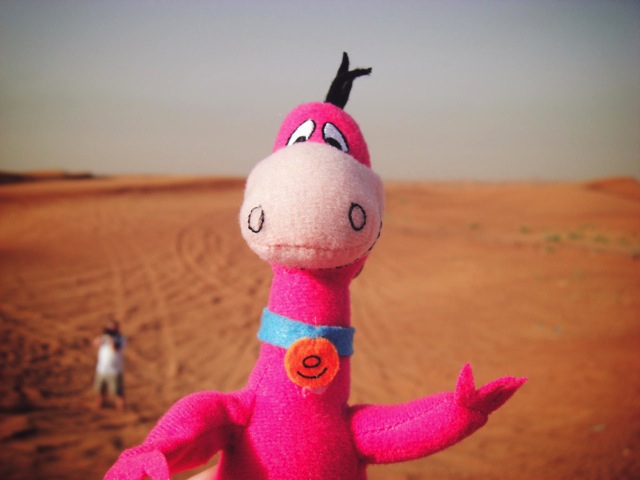 I was lucky to have Dino as company.. his bright pink body really helped liven things up a little!

I can’t remember how long the ‘dune bashing’ segment lasted, but it was indeed really fun. It wasn’t as crazy as I’d hoped it to be, but then again, I AM kind of a crazy person who can endure a lot of.. motion, so… (the other people in the car said it was ‘mad’) 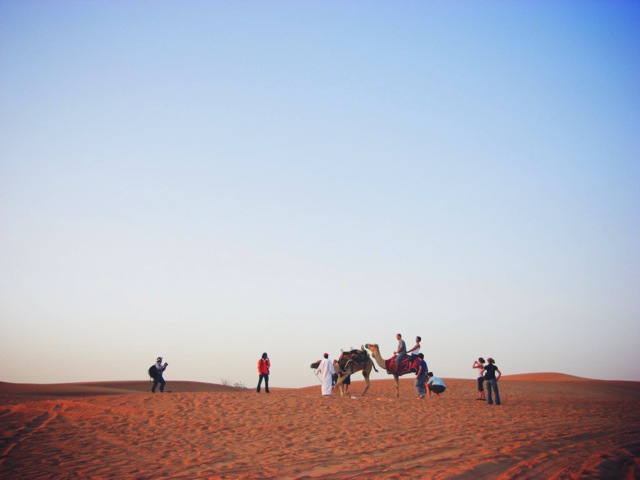 After the ride, there was a stop for camel rides.

I’d ridden one in Egypt before so it wasn’t such a novelty, but of course I went and had a go anyway.. 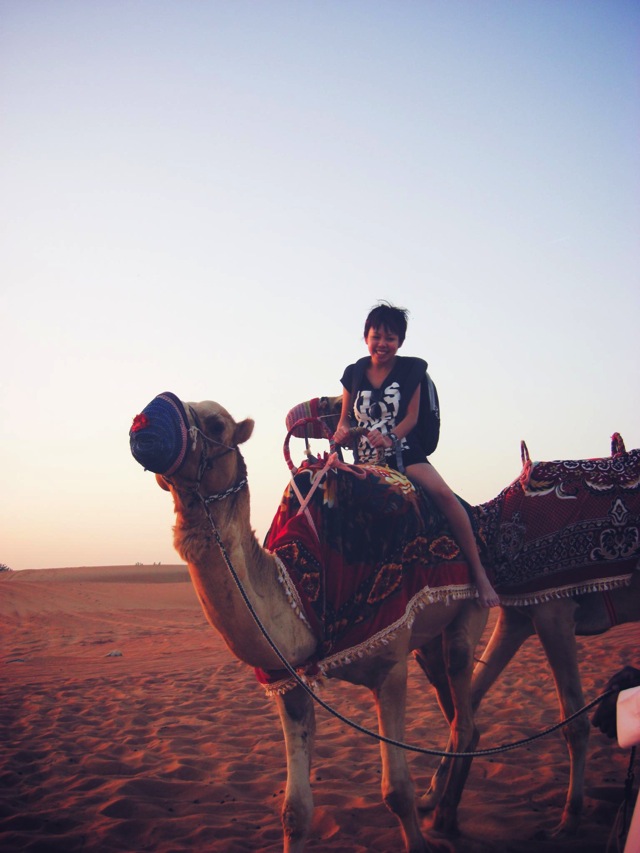 I remember that a Brazilian couple kindly took these photos for me. How kind of them! I was a bit shy to ask back then, and they noticed I was alone so they offered their help with the camera.

Riding a camel is like riding a tall and wonky horse. It feels more unstable.. but it’s fun, cos you’re higher up! Also, you get to sit on what looks like a carpet.. Haha 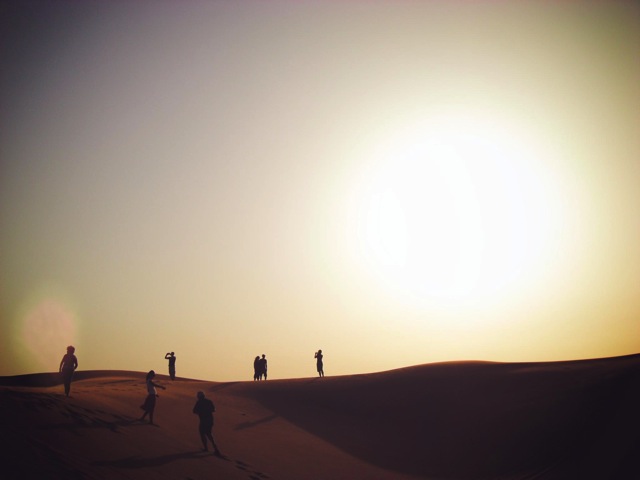 Soon, the sun started to descend and we were driven to a place where everything was already set up for us to have a nice BBQ dinner and watch some belly dancing. 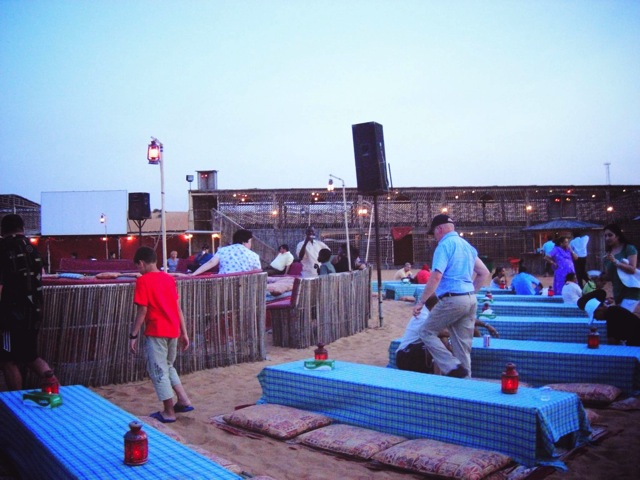 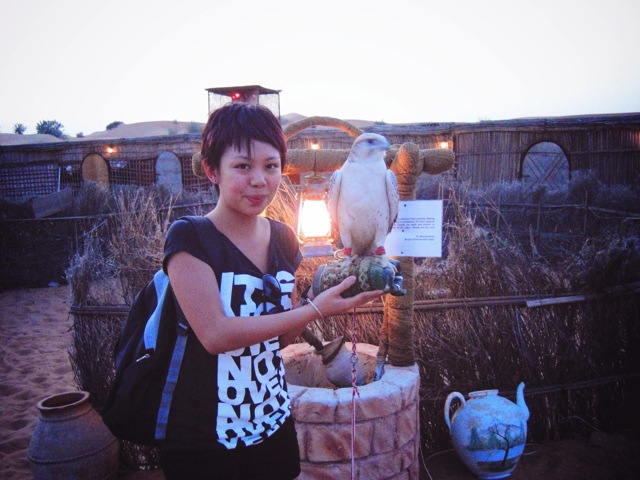 I had the opportunity to befriend a bird.
But I was shy even to speak to birds, especially as I didn’t speak Bird (I still don’t). 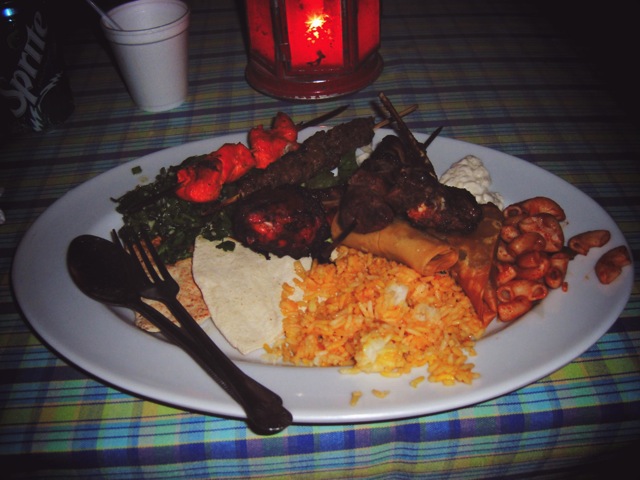 See THIS is why I take pics of food! I was trying to remember what the food was like.. and simply couldn’t. But then this picture popped up and I was like ‘Aaaaah THAT’S what I ate’.

I can’t remember if it was amazing or not, but I know I didn’t complain. 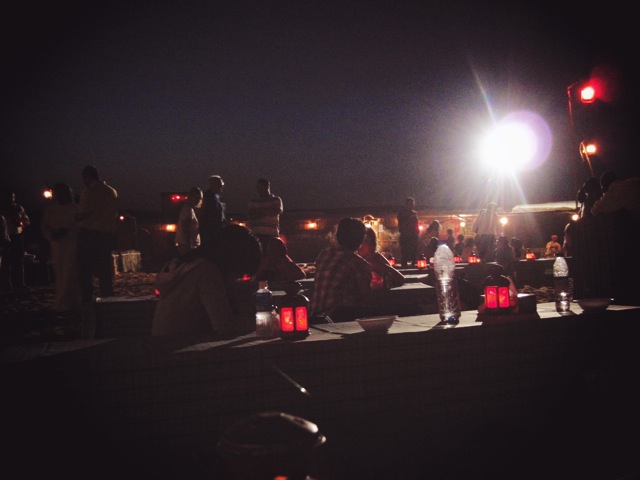 Music was playing all evening and the sky was clear. I sat next to a French family. I think the thing that made this experience so ‘intimidating’ for me was that there were no other solo travellers in the group. It was mostly families and couples, and maybe some groups of friends. I totally felt like the odd one out.

I sat quietly and ate my meal alone, while taking the occasional video of the entertainment around me. I remember being annoyed at my non-iPhone phone having such terrible reception that I couldn’t even call or text my friends.

I let myself wallow in my own loneliness for a few minutes.

And then I looked around and up at the stars, realising what a GREAT day I’ve had and what a beautiful night it was. There I was, having dinner, in a desert, somewhere in the Middle East, with a bunch of strangers. It was fab and I told myself to refocus my mind on the NOW. 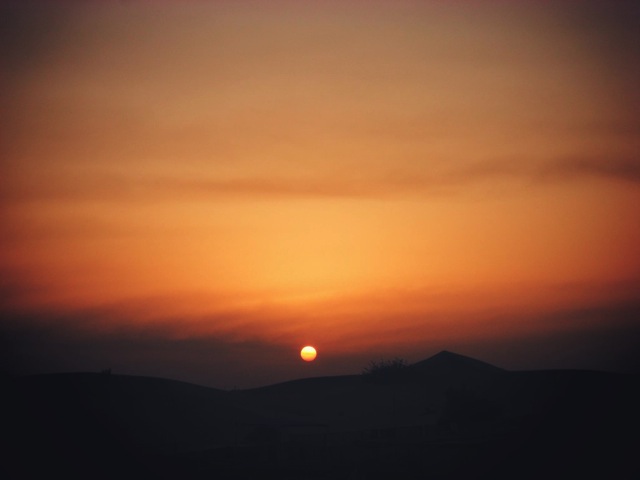 Plus, I got to enjoy a most magnificent sunset.

Obviously, if I were to have this experience now, in 2013, I would’ve ended up with a bunch of new friends and a collection funny photos!

I do plan on re-visiting Dubai, this time armed with ME V2 and a better camera. Emirates operates flights to Dubai from all over the world. I could easily stop there for a few days on the way to Malaysia. In fact, I’ve recently booked my flights for January with them – they’re my preferred airlines to go home with because I quite like breaking up the travel time into two halves. AND Dubai airport is quite an enjoyable place to be spending one or two hours – good shopping, and free wifi 😉

I might also add that Emirates uses the A380 for that route and offers in-flight wifi..

Have you been to Dubai before? What did you think?

I’ve never been to Dubai, and has never really thought of going there, but darn, your photos! WANT. A local budget airline here sometimes have promo fares and a roundtrip Mla-Dubai only cost $250! Hmmm.

That’s really cheap.. no reason for you not to go now!! I can’t say Dubai was one of my favourite places to visit, but I did have lots of fun there 😉

I’ve never been to Dubai and don’t really think I’d care to go – but I do love a good desert trip and that sand really does look ORANGE! Beautiful photos even if they’re from a crappy compact!

Yeah I know what you mean.. I love deserts too! But there are plenty around the world 😉

Thanks for writing this post! I’ve often flirted with the idea of travelling solo but have been scared for a lot of reasons, mainly the act of talking to strangers doesn’t come naturally to me. (Of course, I also like the idea of taking things in on my own, but the option of interaction is there.) I liked that this was more about how you detailed your trepidation, and it’s nice to know that after a while, there’s no need to sweat the small stuff. 🙂 Thanks again.

Travelling solo saved my life! It made me so much better and made me learn so much about myself. I’m glad you enjoyed the post 🙂

Gorgeous! I’ve never been, but have been wanting to go to Dubai for a few years now. This post is only making me crave it more! How amazing 🙂

THANK YOU! You should go.. I really enjoyed it 🙂

I haven’t been but I hope to! I haven’t really traveled solo except on business… I’m going to be alone for a night in Morocco this January and I’m actually looking forward to it!

Please do let me know how it goes!! I’m sure you’ll have a great time.. just be positive 🙂

[…] Yeah, I guess I’ll use my transits to do another round of Desert Safari and this time with sand boarding in the […]