HI FRIENDS! It’s been a while. Earlier this month, I embarked on a two-week solo trip around Portugal. You may notice that I’ve been to Portugal rather a few times recently – yes, I’ve totally fallen in love with it! The same way I fell in love with Italy and used to frequent it during the summers past.You’ll hear more about my itinerary and activities in my coming posts! I started my trip in the Algarve. Flew into Faro from London. I did consider staying in Faro for a night or two but after consulting with some friends (and the internet!) I decided against it – there was too much I wanted to see and do in other parts of the country.My flight landed in the evening and the buses to Albufeira stopped running at 7.30pm (or thereabouts), so I took a pre-arranged taxi for €15 which dropped me off in the centre of town. I had to walk for about five minutes to my hostel. I don’t ‘backpack’ per se (I’m just too small for it!) and so I had a small trolley bag. The road was all bumpy cobblestones and my bag made such a LOUD NOISE. Clickety clack clack clack… as if I wasn’t drawing attention to myself with my crazy clothes and pink hair already! Hence I felt a little self-conscious. So much so that I decided to just LIFT the bag all the way.. and turned up huffing and puffing at the end. Haha.

If you know me personally or have followed my travels.. you’ll know that I don’t normally stay at hostels. In fact, the first time I used a hostel was two years ago in 2011, when I was kind of forced to after I got kicked out of that farm in France (read about how that changed my life). Yes it was kind of cheating since I got a private room in one of the ‘best hostels in Europe’ (Villa St Exupéry Gardens in Nice) but it opened my eyes to and destroyed all the silly stereotypes I had about hostelling.

With the help of Hostelbookers, I designed my solo Portugal trip around some carefully handpicked hostels. I was really excited (I HAD THE MOST AMAZING TIME).

In Albufeira where I spent two nights, I picked a really new hostel called Ale-Hop – it only opened this year in July! The name is actually that of a shop that sells ‘bits n bobs’ and other souvenirs, and the hostel is located above it. They’re so new that they haven’t got a proper website yet, but you can check out their Facebook page. 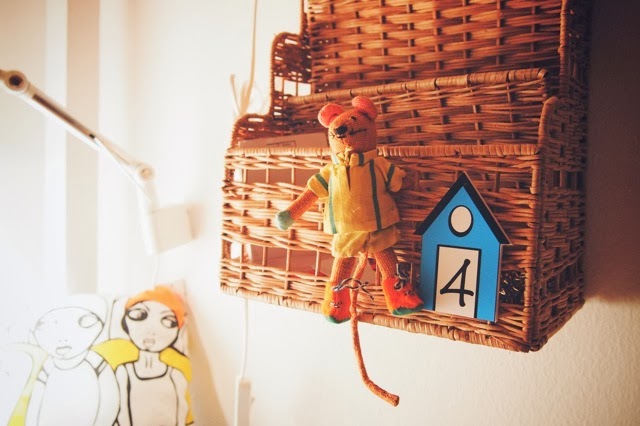 The owner, João, welcomed me at the shop. In fact, the Reception = Till = Reception. He showed me around the building and I was placed in a 6-bed female dorm with ensuite bathroom.. except that, there were no other guests in that room so it was rather a treat for meeeee 🙂 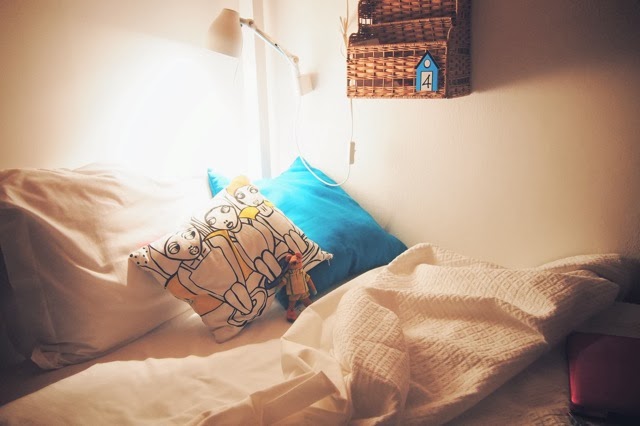 I was really impressed the moment I stepped in. Not only was everything shiny and new – the beds were all made and it all looked super cosy.

I introduced the room to Goliath (my pet mouse), freshened up (read: replaced my face) and went down to find dinner. João recommended a good restaurant called ‘O Alentejano’ just down the road that served traditional Portuguese food. 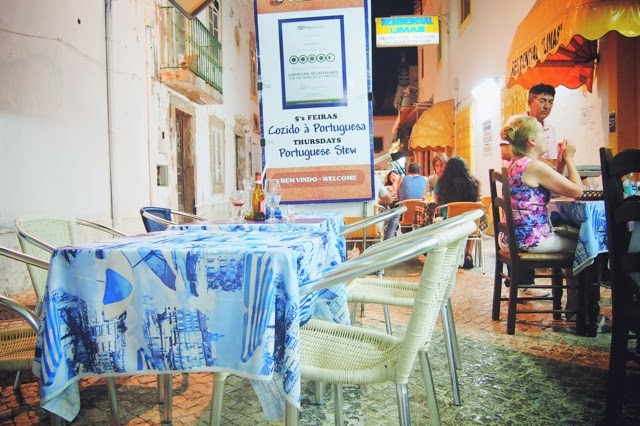 I love dining alone! It gives you so much time to concentrate on eating and to fully enjoy your meal. I think it’s one of the best forms of ‘me time’ ever.

For my first meal in Portugal I had bacalhau (salt cod) – of course, I love it.. almost to an obsessional degree. 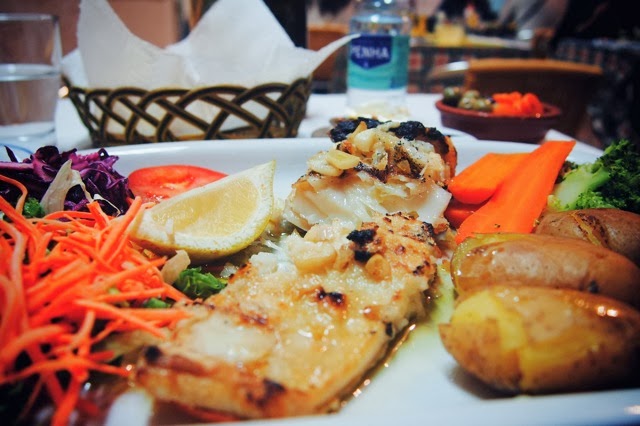 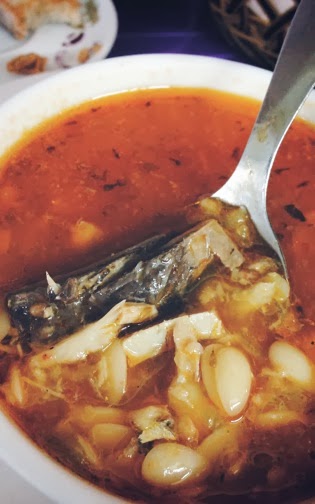 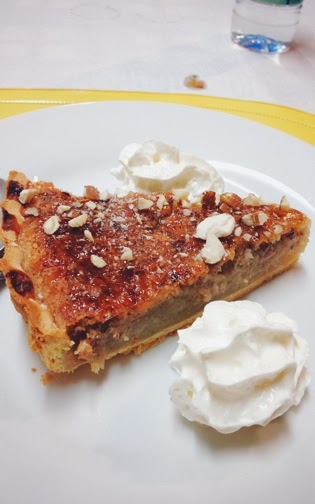 EVERYTHING WAS SO GOOD. So good that I went back again the following night. I know.. how unadventurous of me 🙁

But the upside was that the owner was so happy to see me again! We spoke a little. He opened the restaurant about five years ago and lives in a nearby village, where he grew up. I think his name was José. You can actually see him in the photo above – he’s the dude standing on the right side near the seated woman! 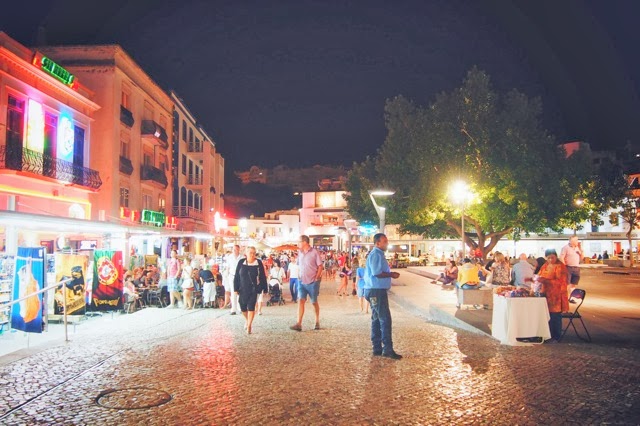 I had a wander around the town and quickly realised that Albufeira was ‘very touristy’. Dominated by British tourists, even the streets were occupied by things like pubs screening English football and I spotted many groups of erm, British people. Haha! I guess it is in Algarve what Magaluf is in Mallorca.
I decided to go back to the hostel and spend the rest of my night on their roof terrace: 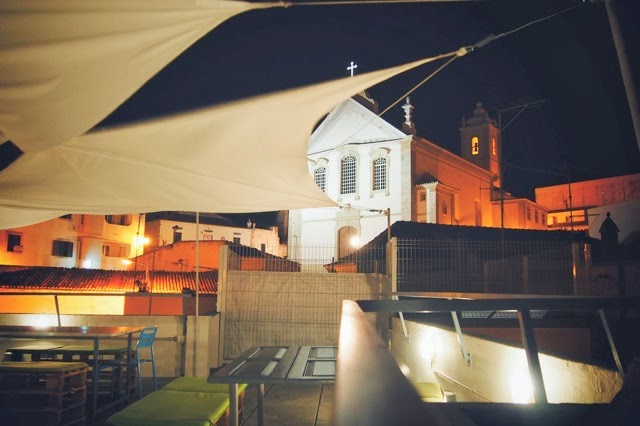 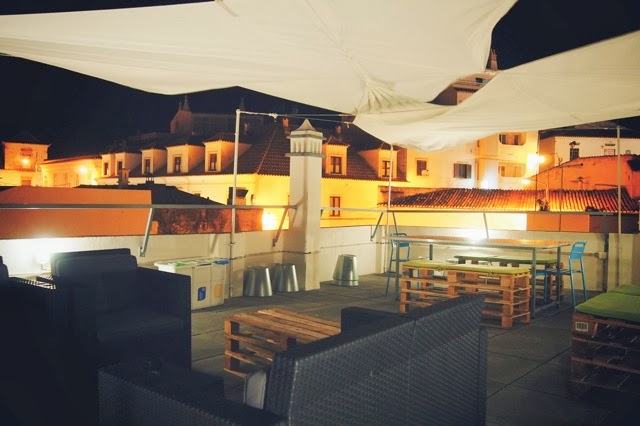 It was quiet. Possibly because it was a Monday night. I had the whole place to myself. It was fab.
Look at the view! 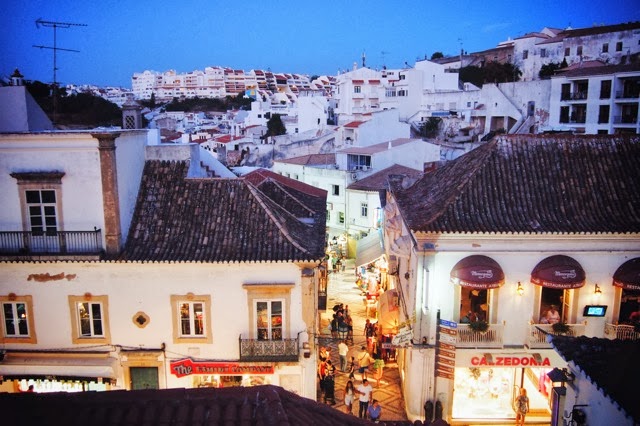 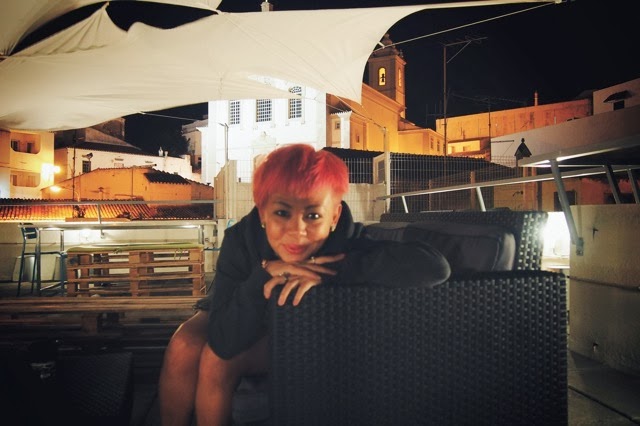 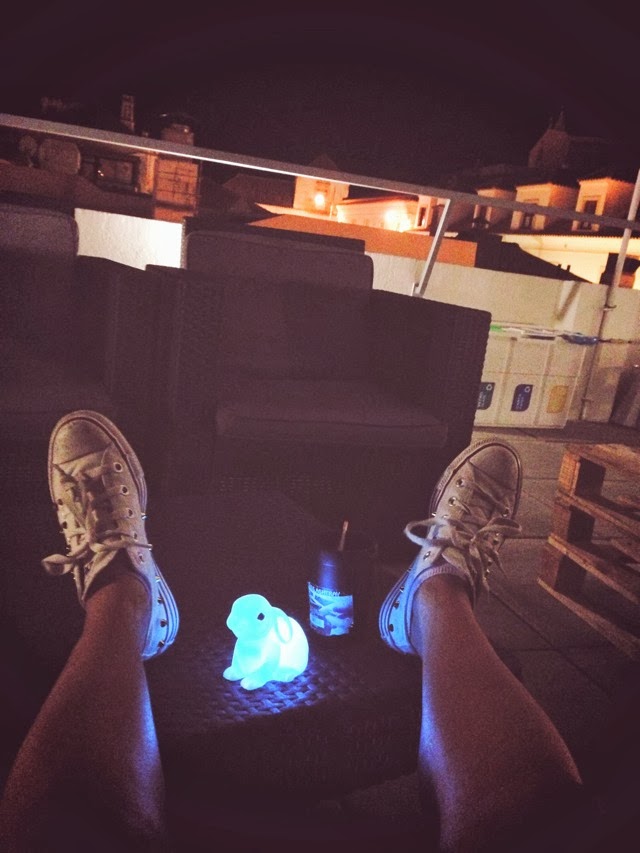 I put on some music, watched my light-up toy bunny, and had a naughty little joint… (again – this is an honest blog)

It was a warm night. It as a happy night! 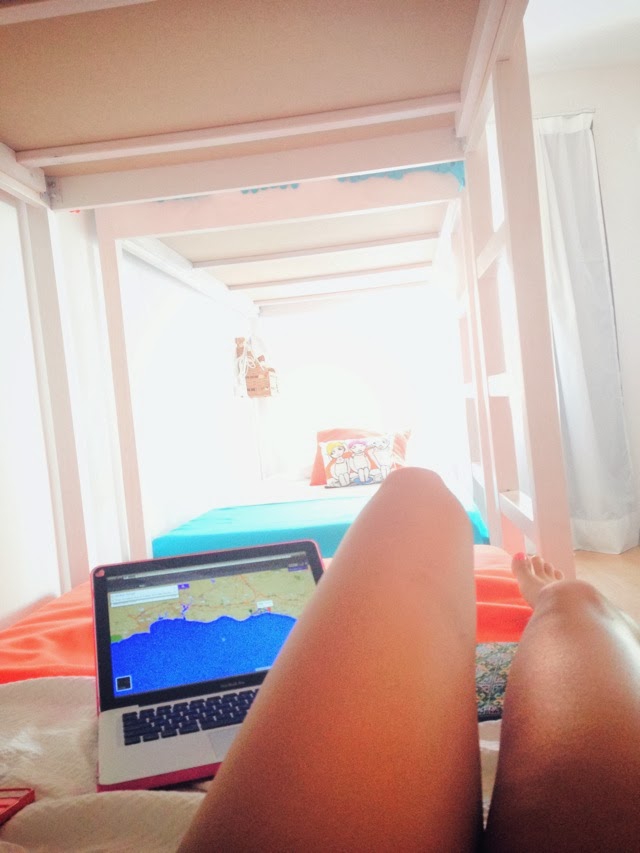 I took my time getting up – hey, I was on holiday! Used the free wifi to look at maps and plan my route a little bit. I even painted my nails 🙂 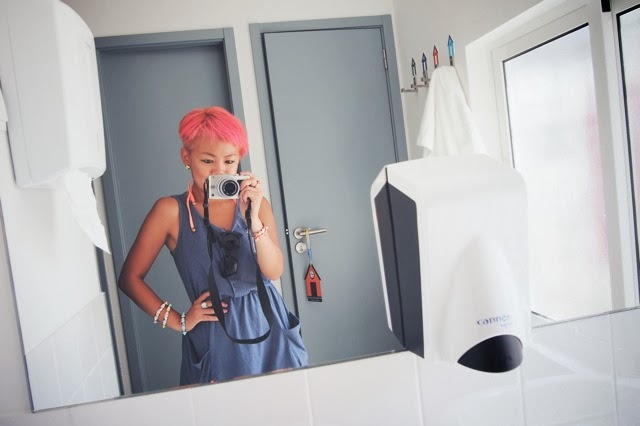 ^Me in the ensuite bathroom, which had two toilets and two showers. All were super clean and nice and new. I especially enjoyed the large mirrors.. 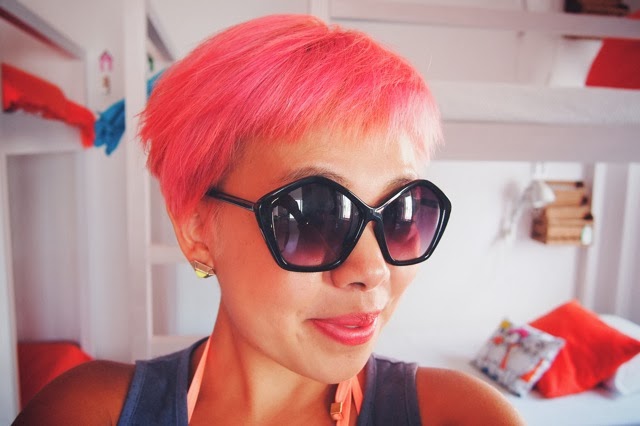 ^I bought these sunnies from Topshop before my trip.. I thought they were cool but now looking back at them, I’m not so sure… I guess I needed to see photographs of me using them first? 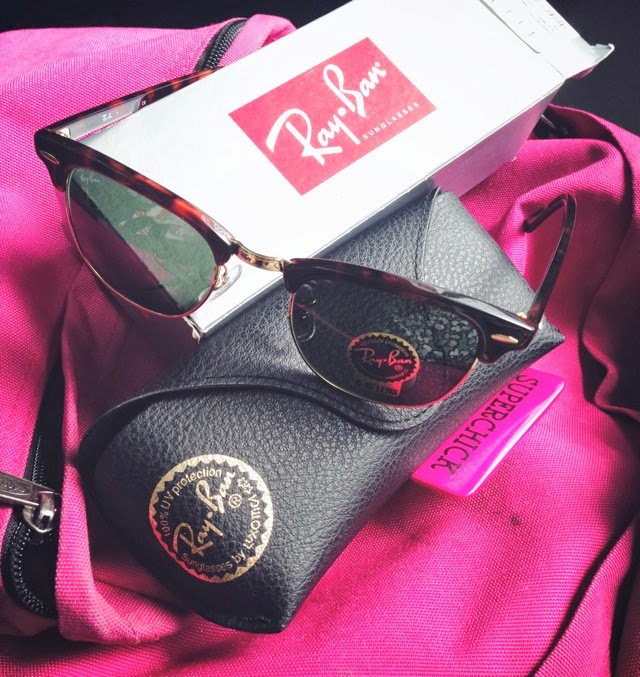 I’m a lucky girl though – the lovely people at VisionDirect had a pair of sunglasses of my choice shipped to me in Portugal. I picked something rather classic – a pair of RayBan Clubmasters. Initially they wanted to send me some contact lenses to try.. but I have perfect eyesight. I did experiment with coloured contacts – FreshLook contacts to be precise -when I was younger but I never got over the whole ‘putting something foreign in my eye’ thing..

ANYWAY, I was really pleased! The Raybans arrived at a friend’s address in Porto, where I would visit later on in my trip. 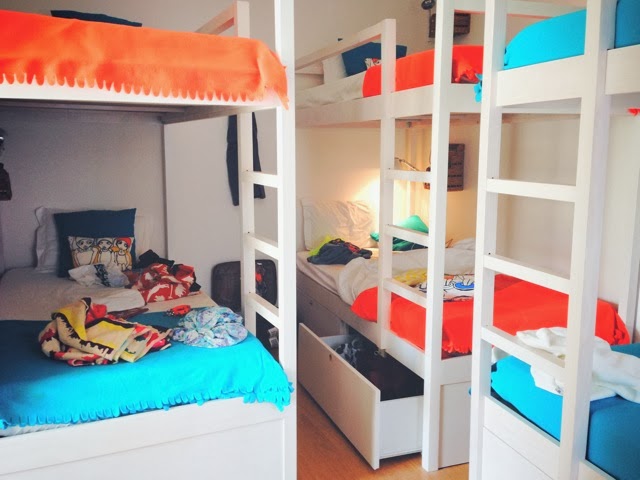 As you can see, I made good use of the extra space available to me 🙂

I loved the colours in the room. I felt like I was in some sort of school dorm! 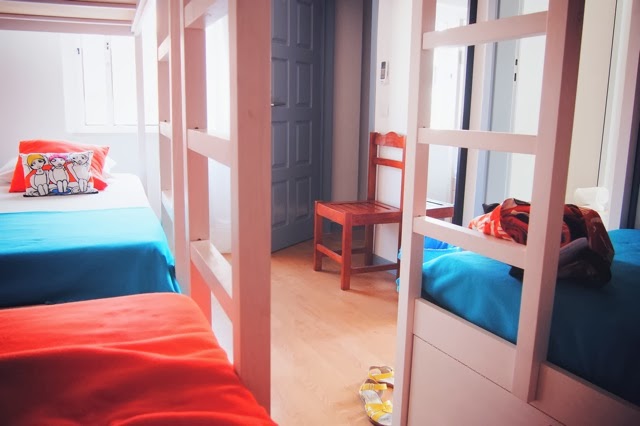 I thought the place looked much better with daylight, so I took some photos before I waltzed away to the beach. 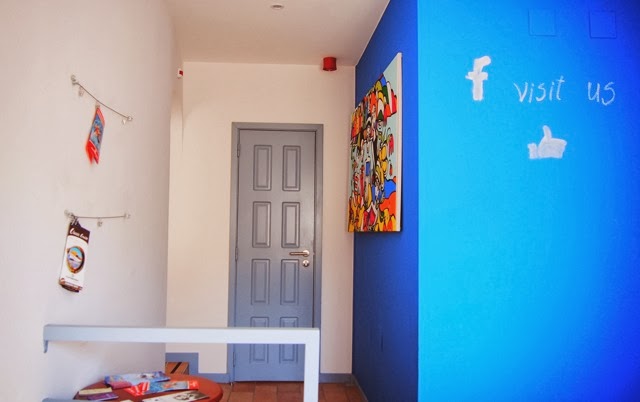 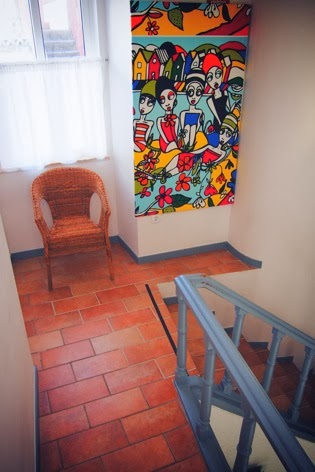 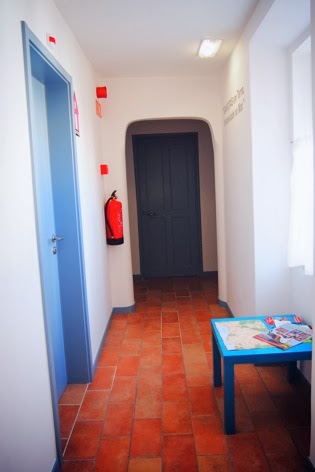 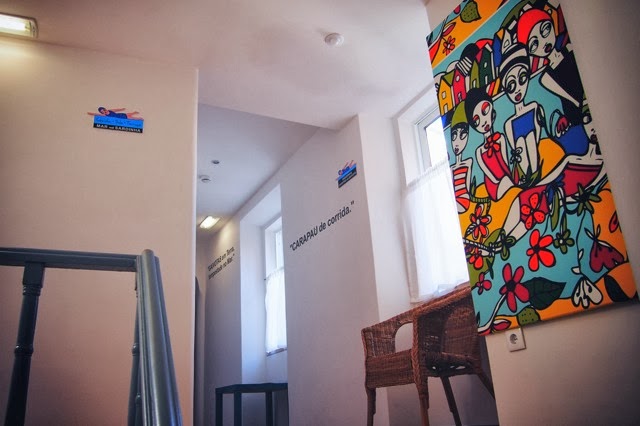 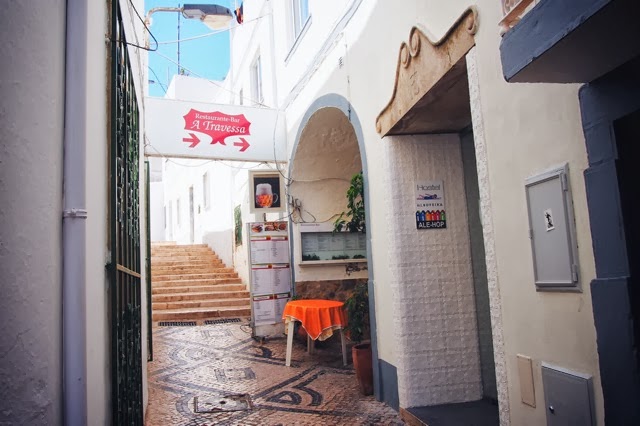 ^The hostel can be accessed via a small lane next to the shop. Guests are given a personalised security pin which can be entered onto a keypad at the door!

I think ultimately the best thing about the hostel is its location. You can’t beat it really. It’s right in the centre of everything. It’s not what you would call a ‘party hostel’ and there are no organised social activities etc. It’s a place you can go to unwind and have a quiet time after a long day out – which was perfect for me.

I know it was helped by the fact that I had a six-bed room all to myself, but I genuinely enjoyed staying here!

Special thanks to Daniela, one of the staff, who was ever so helpful and patient with me. She was allllways smiling. I can’t wait to go back to visit againnnnn 🙂

Nights here can be booked via Hostelbookers. They have private double/triple rooms too. Rates start from £15pppn in an eight-bed dorm.

Excellent proof that some hostels are really cool. I’d love to visit Portugal (maybe next spring?), and Albufeira is definitely on my list. I’d try the bacalhau too, it looks yummy! Happy travels! 🙂

Congratullations to João (my bif Fellow) for is Hostel, i´m glad that you have enjoyed your stay in his place and in Portugal and in particular in Algarve and Albufeira we wait for a new vist from you and your friend´s as well, as you can see here in this country/region we know how to receive people from all over the world!!!!!!!!!!! take care Jorge Gregório, from Albufeira!!!!