I can’t count the number of times I’ve lazed around at a London park this summer.. Thanks to my flexible working hours, I can normally soak up some rays before or after work, by going in late or leaving really early ;)There are two main ‘big’ toys that I like to take along with me – either my skateboard or my ukulele, which I’ve been trying to learn/practise more these days. So far I can play couple of French songs and bits and pieces of a few others. I try to make more time for it but yknow.. London livin’ = very busy livin’.Here are just a handful of pics taken at Hyde Park on a sunny evening.. oh and, a video of me singing (softly, so people around me can’t hear!! haha). 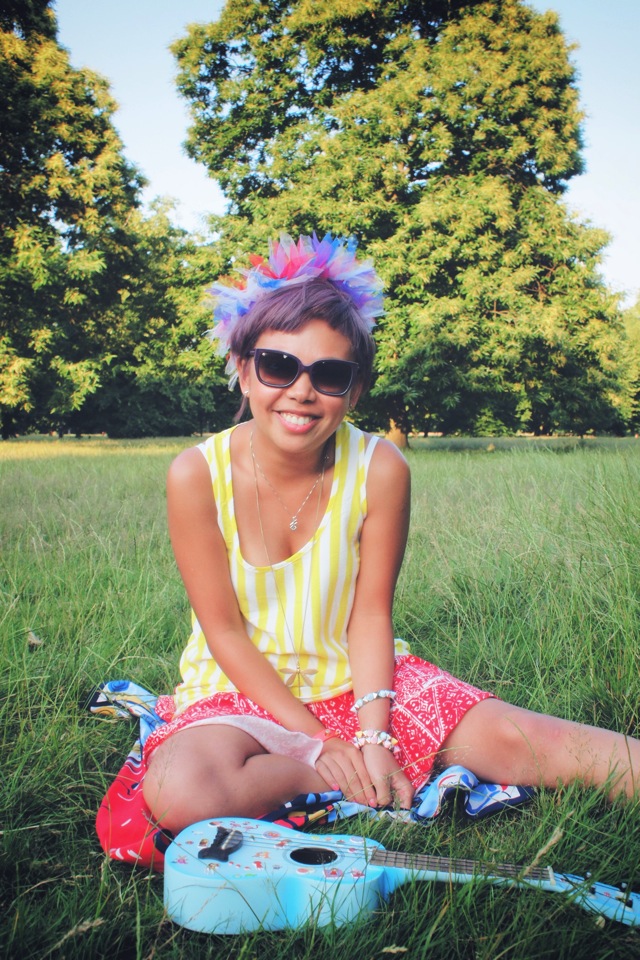 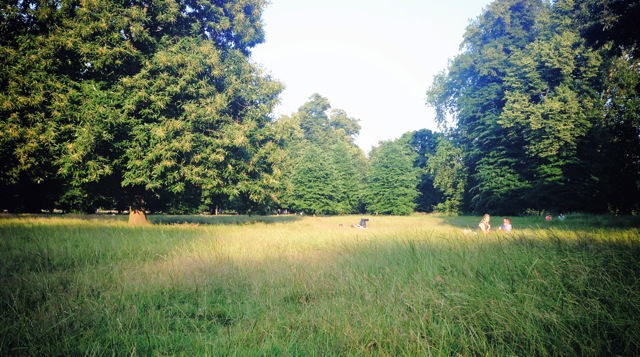 This was the first full song that I learnt to play! I don’t think of myself as a great singer at all.. but I do enjoy it and I guess for the most part, I don’t care how I sound. Which is why.. this video.. is here…. 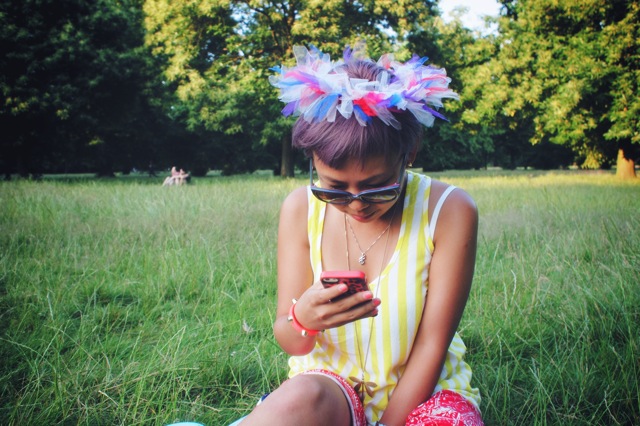 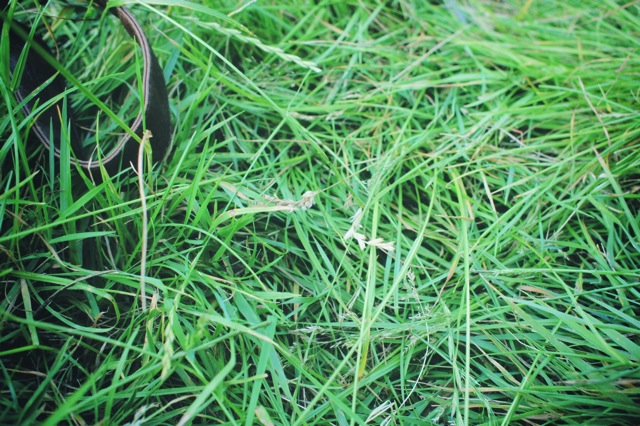 The grass was SO GREEN I wanted to EAT IT. Sometimes I get really tempted and put a few blades near my mouth. But mostly I just put my face really close to the grass and smell it. It’s so good. I love grass! 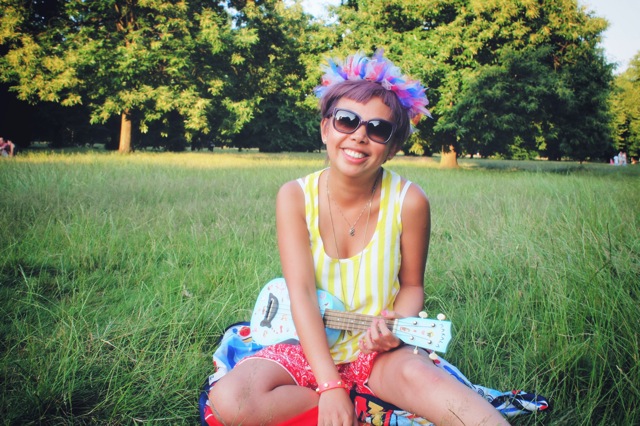 The scarf I’m sitting on is vintage.

I spent the weekend getting super messy (read: messed up) at the London Holi One Colour Festival. It was a giant heap of FUN. At one point, my entire face/neck was blue and people called me an alien. Or Oompa Loompa.

Besides that, I’ve been enjoying the company of my friends and ‘doing nothing’. Reena introduced me to this new Netflix series called ‘Orange is the New Black‘, which is about a mid-thirties woman who surrenders herself to jail for a decade-old crime she committed with a a drug-dealing lesbian lover. I’m hooked! It’s been MONTHS since I sat in front of a screen and watched something that’s not YouTube.

If I had more hours to spend in a day, I’d be finished with other shows I started (but never had the time to complete) – Revenge, 2 Broke Girls, Modern Family, etc. Maybe even play some GAMES! I used to enjoy my Nintendo DS (sorry baby I haven’t the time now) and Little Big Planet or Guitar Hero (I LOVE THIS) on the PS3.

When I was at uni, there was a period when I’d get through a few hours a week playing fun computer/pc games with my male flatmates. If you click the link you’ll be able to see what’s new these days.. There’s gonna be a new Sims coming soon! Back then I played with stuff like ‘World of Warcraft’ or ‘Counter Strike’.. totally geeky (and kinda embarrassing). A friend recently told me that he’s been hooked on some new title called ‘Darksiders 2’. I googled it and all I saw were pics of an angry-looking horse..

Though.. if I REALLY did have extra hours in a day.. I reckon I’d be a pro at electric guitar, have learnt a new language proficiently, and will have properly manicured nails (not these horrible chipped things I currently have growing wild on my fingertips). The most likely scenario though, I hope, would be that I’d have so much more time to dwell and plot and plan that I’d be travelling even more frequently.

Hmm, y’know what, I loved Orange is the New Black so much that I think I’m gonna have to MAKE TIME to watch it. I’m also gonna try out some games from the app store (iPhone). Hello less sleep and puffy eyes!

Please do tell if you have any recommendations for TV shows or games n stuff. Other than Spongebob. Cos I already have that (obviously).

Way to rock it out Small Crazy. Too bad you did not have the ukulele at RWTBEX.

You are so adorable!! I love how adventurous you are with your hair and how you just exude energy and positivity!
Fantastic blog, so cute that you enjoy gaming too. I’ve followed you on GFC & Bloglovin! Have a great weekend. 🙂

Watching that video just put a smile on my face so thansk for that.

wowww, you sing really well. I played your video while reading your entry and it made me happy and feel positive. It’s kinda like your channeling your bubbly and happy go lucky attitude to me 🙂

You are absolutely 100% adorable. Such a cute outfit and such a cute singing voice!