You guys must be sick of my Portugal posts.. but I’m not, and it’s my blog! SO. Haha.Today I want to share with you a magical evening I was lucky enough to experience whilst in Sagres.
As you know, I spent a few days at surf camp (click to read about THAT). On my first day there, I met a girl called Cristina, who was bunking with me. I had my afternoon all planned out – I would chill out downstairs in the lounge until everyone came back from surfing.

But Cristina appeared before me just as I was about to resign to a couple of hours of me-time and chirped, ‘I’m going to the beach, wanna come?’

OF COURSE I said YES. And it dawned on me – WHY did I not think of going to the beach? WHY? WHAT WAS WRONG WITH ME? I had just arrived in Sagres AKA BEACH TOWN and I wanted to SIT DOWN on a sofa and what? Just sit there?? I was so stupid! Like DUH.. what kind of sun worshipper was I? A shit one!

So off I went and packed my bags – in something like ten seconds. 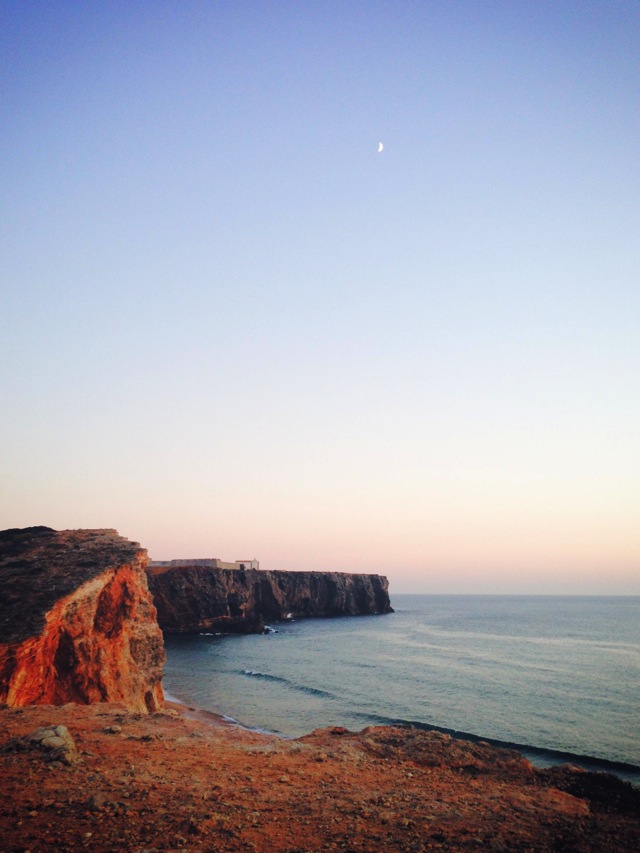 ^Sunset and moonrise at Praia do Tonel

Once I was ready, the both of us sauntered off.. into the wild.. nah just into hot, dry Sagres. 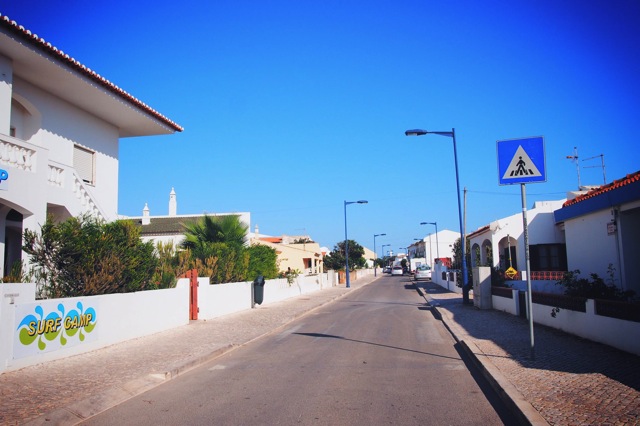 ^The street where the surf school was near 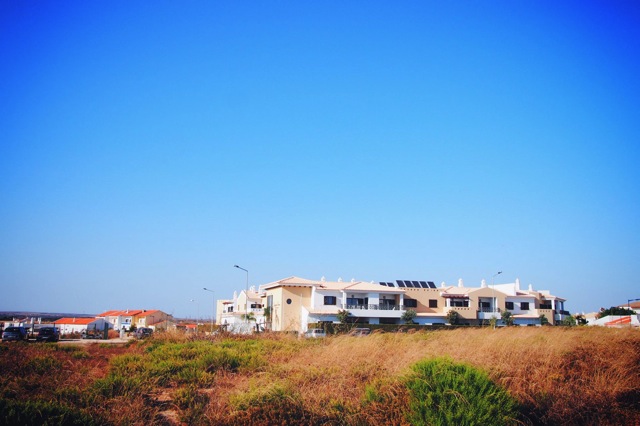 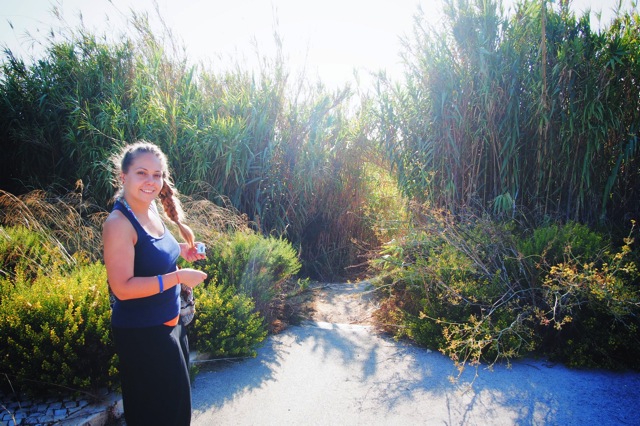 The walk to the beach was really fun. The whole place was so EMPTY.. so barren. The landscape encouraged us to walk slowly and because there were hardly any trees, the sun was upon us like a giant blanket of joy! 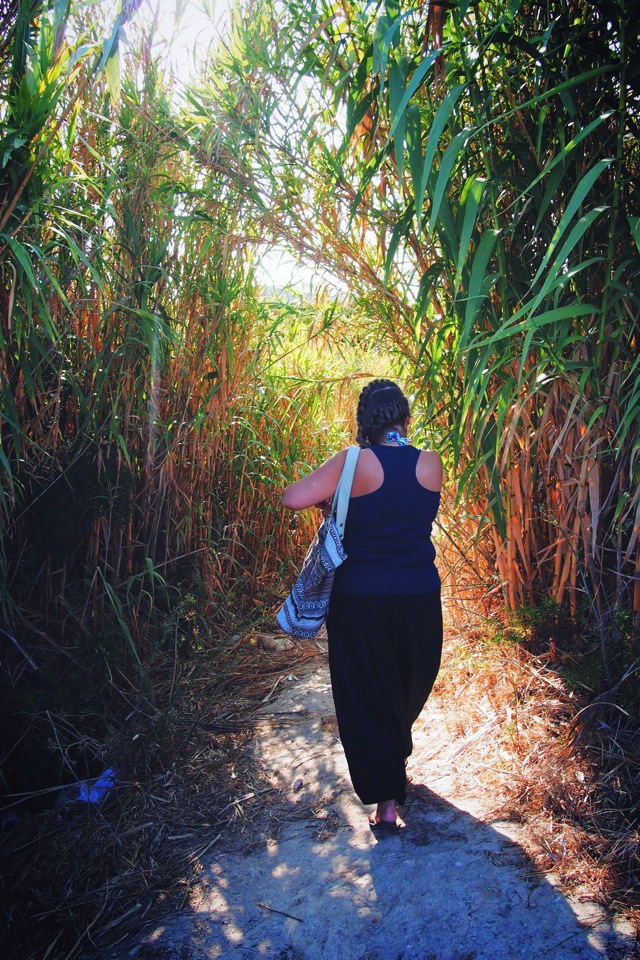 There was this part where we had to walk through a narrow dirt path outlined with long tall grass.
I felt like I was a part of Spirited Away, about to walk into some sort of weird screwed up fantasy world (a good thing).

But instead I got this ^

About two minutes from this point, we got a bit lost. There was no one in sight except for two old non-English-speaking men and we had to use our very broken Portuguese – onde? praia? a praia?

At least I know now that it’s ‘onde é que a praia?’… I think so anyway. Haha!

Well, whatever it was, it worked. Eventually, we arrived at Praia da Mareta, one of the many beaches in Sagres.

^just before the steps down to the beach. 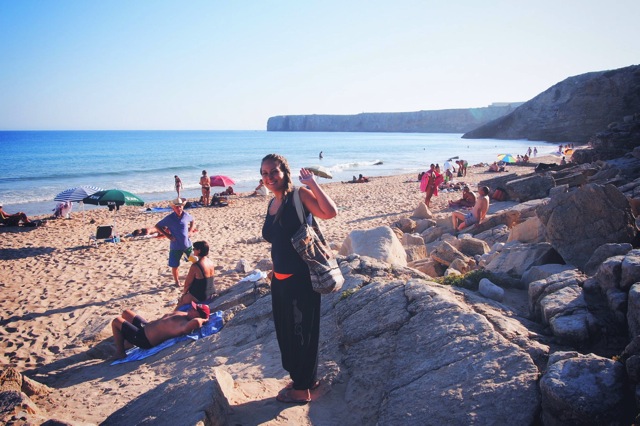 What a gorgeous day it was! In mid-September, I was feeling like the luckiest person (from London who had managed to escape the onset of autumn)!

Obviously, I bragged about it to my friends. This is why we go on holiday, right? :p 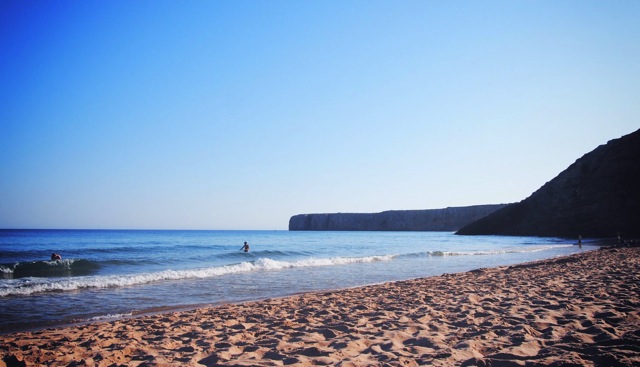 We found ourselves a nice spot in the sun and… shared a spliff (ok for the Nth time, this is an honest and open blog). I swear all my closest friends are made this way.. ! 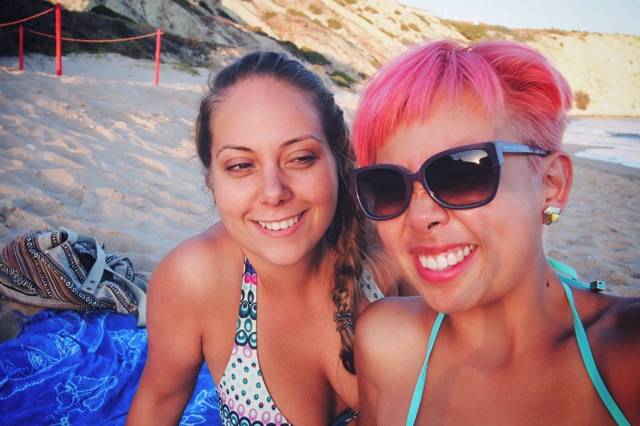 We had a most lovely time talking about.. rubbish, of course. Rubbish I don’t really remember. 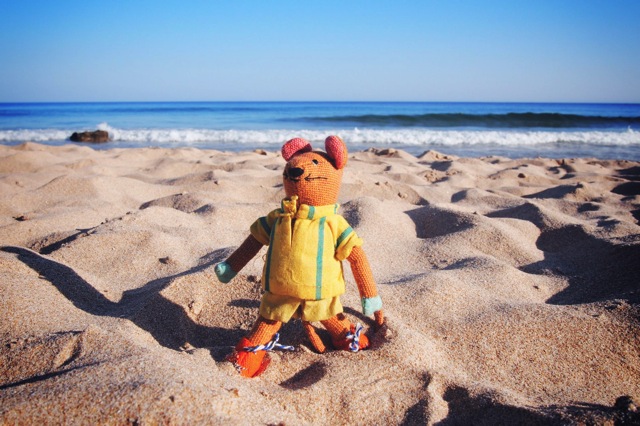 ^Goliath came along too. 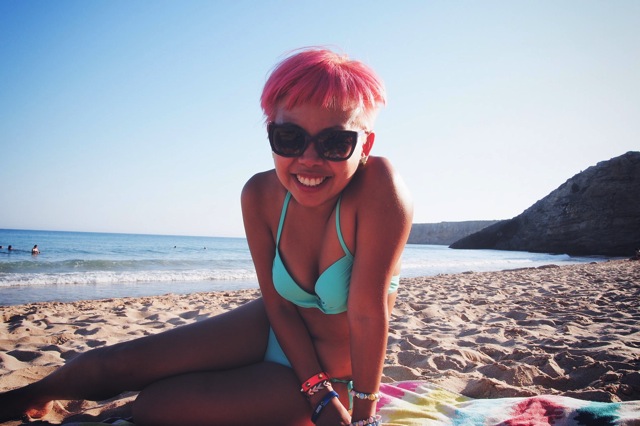 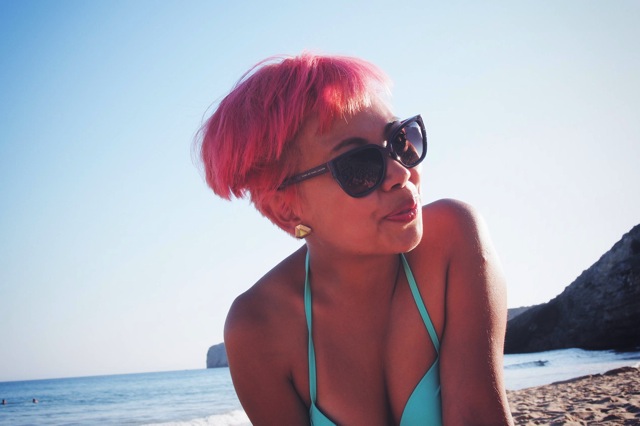 I wish I had tiny people to place on the little mounds, to create an exciting scene! Tell a story! 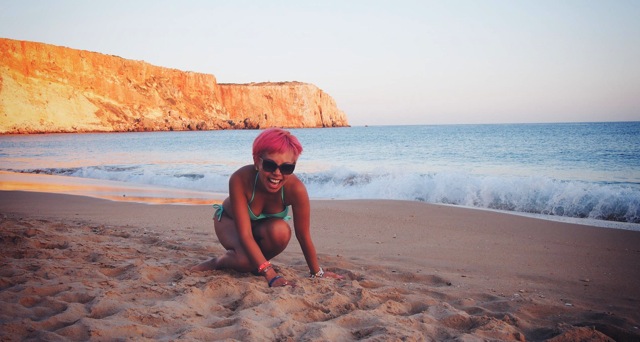 Once started to get cold and we could no longer keep moving along the beach following the rays.. we picked up our stuff and left. But look what greeted us when we got back onto the street: 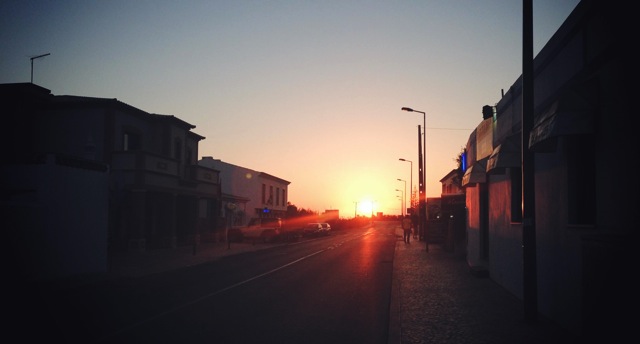 THE SUN WAS SETTING.
The big, shiny sun was going down.

We looked at each other for a few minutes, confident in our mutual desire to chase the sunset.

We RAN. RAN LIKE THERE WAS NO TOMORROW.
(Or as my crazy little sister would say – RAN LIKE COWS – no it doesn’t make sense, but it’s not supposed to). 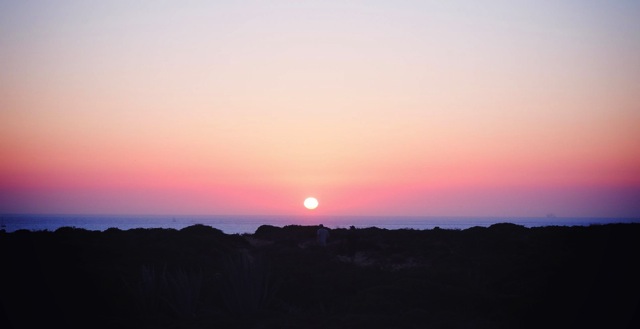 We ended up on a cliff slide overlooking one of the more scenic beaches in Sagres – Praia do Tonel – JUST as the egg yolk sun was about to touch the line separating the sky from the sea. 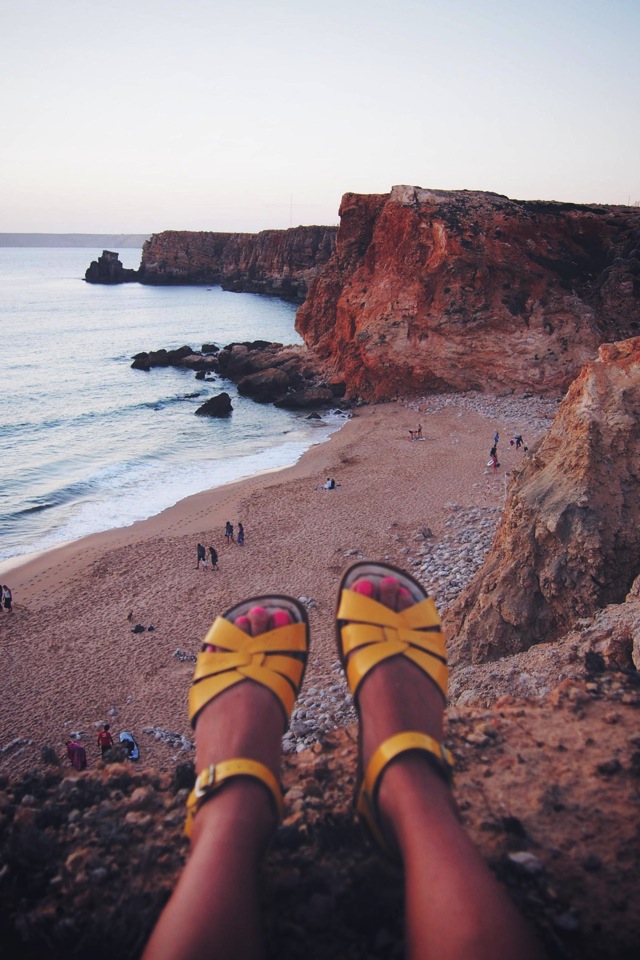 We sat on a ledge, sharing my beach towel, and smoked a little more.

It was THE MOST beautiful sunset. Magic! Magnificent!

The sky was clear as clear could be. The air smelt and tasted good.

We were really happy! 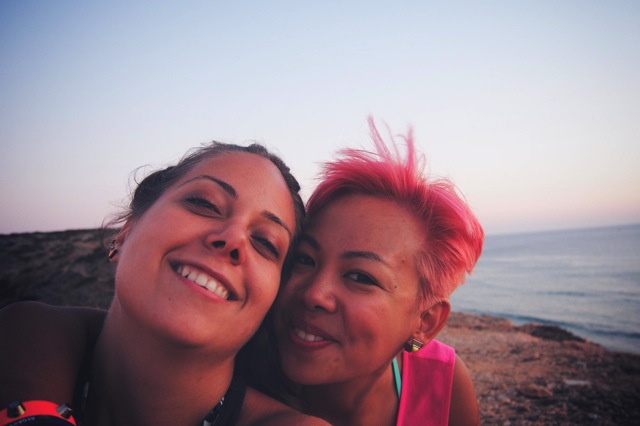 ^So happy that we didn’t care that we looked like crap.

I can’t really fully describe how truly a special moment that was. Just us two girls, who had only met a couple of hours before, perched on a ledge, witnessing a stunning sunset together. We promised each other that we would visit each other soon, after surf camp was (inevitably going to be) over. 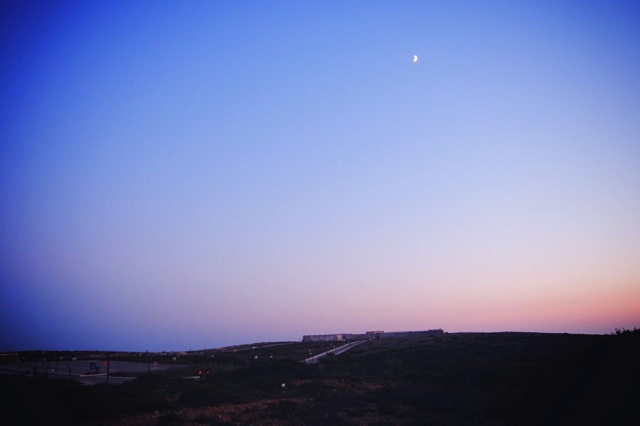 ^In the distance you can see Sagres Point, a kind of fortress-like building (it’s actually a promontory) I never got to visit. 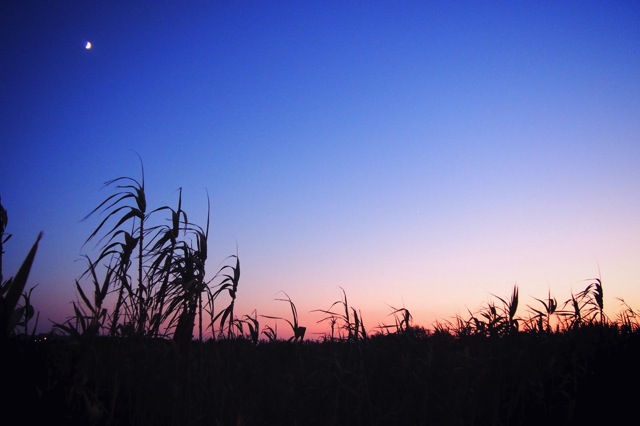 Cristina and I then had a most serene walk back to surf camp under the night sky.

Editing the photos for this post made me MISS THE SUN so much. When I got back to London from Portugal, I was so brown. Super tanned. So tanned that even I thought it was a bit much. But two months have passed and so I’m a bit more normal now, though I do want to keep a bit of my tan still on.

Which brings me to THIS below – some really handy tips to help you keep your tan for longer than ever! I’m not just saying.. I’ve read through and they actually are pretty good tips. Some of which I already practise, and not to be a brag, but I do have pretty good smooth skin that’s erm.. not pale! 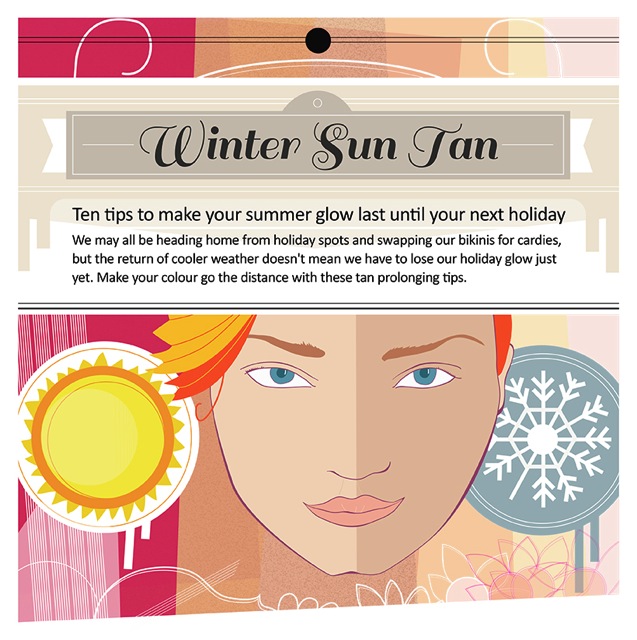 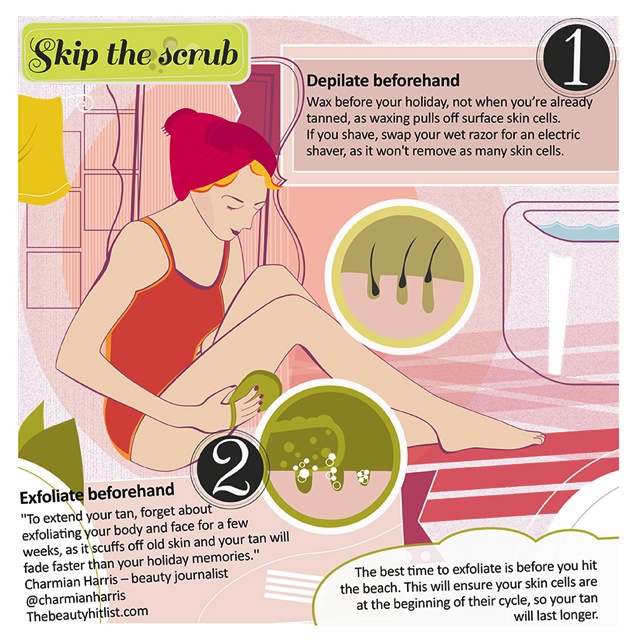 I always have a wax before any holiday. But I never exfoliate – this is because I’m lazy. 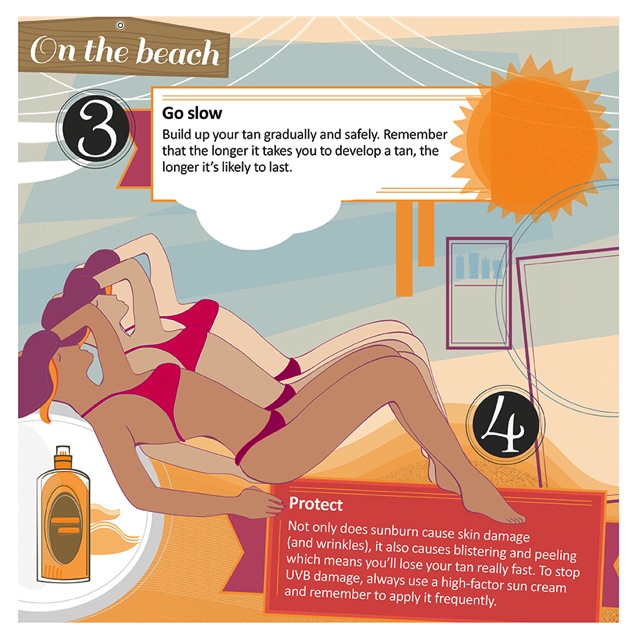 Because I have asian skin (and generally I’m kind of a mutant), I pretty much never burn.. it would take a LOT of sun exposure to sizzle my skin!

Saying that, I am a firm believer in sunscreen and these days I apply SPF50 before going to the beach. Protect your skin! 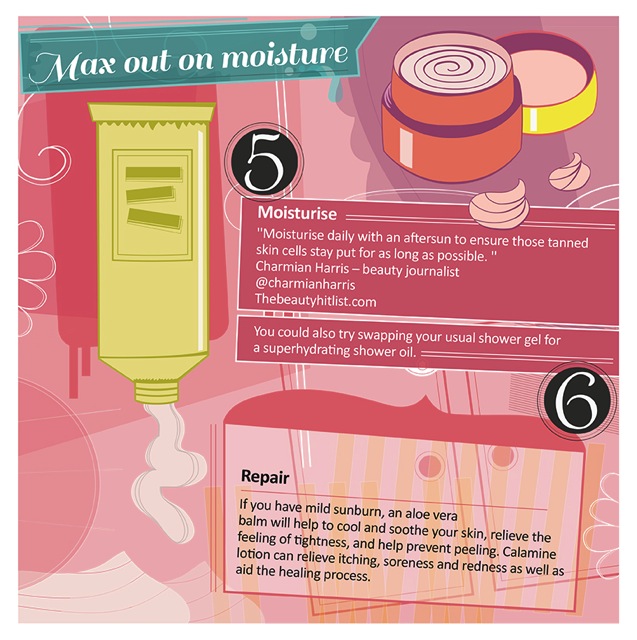 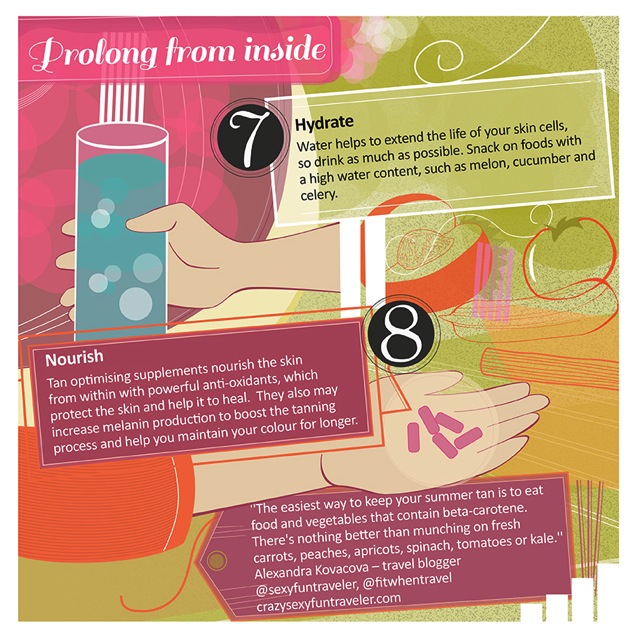 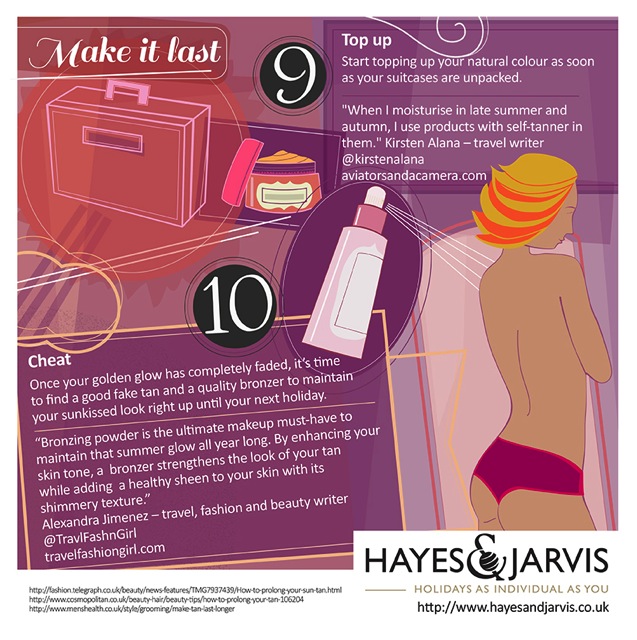 This post was brought to you in collaboration with Hayes and Jarvis.
You’ve got them to thank for these useful tan-keeping tips!

The beach views are incredible! What great cliffs.

Such beautiful pictures! I lost my summer glow long ago 🙁 x

Thanks! Perhaps time for some self-tanner? 😉