*I wrote this last week but forgot to publish..

Sitting in a beautifully sunny garden in Milan right now.. and about to tell you a story about an afternoon spent in Bordeaux during one of the last days of 2013, in the winter!

My best friend from home, Joyce, had come to France spend the Christmas period with her partner Clem, whose family lives in Bordeaux. I joined in for one week. 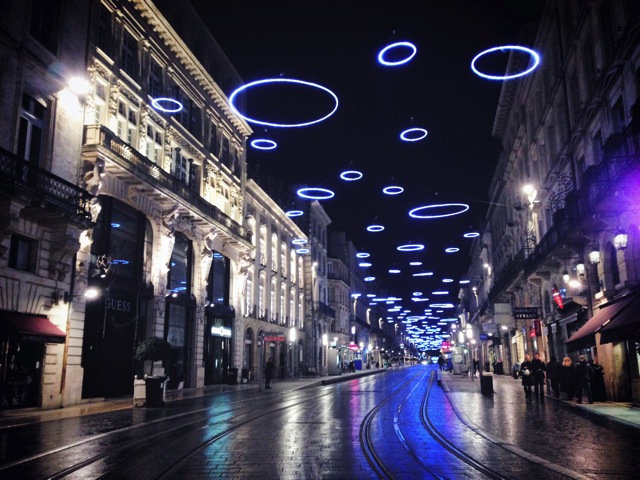 ^This is my favourite photo of the city that I’d taken during the trip.

Bright circle lights hanging over the streets illuminate the city at night.. it felt magical! 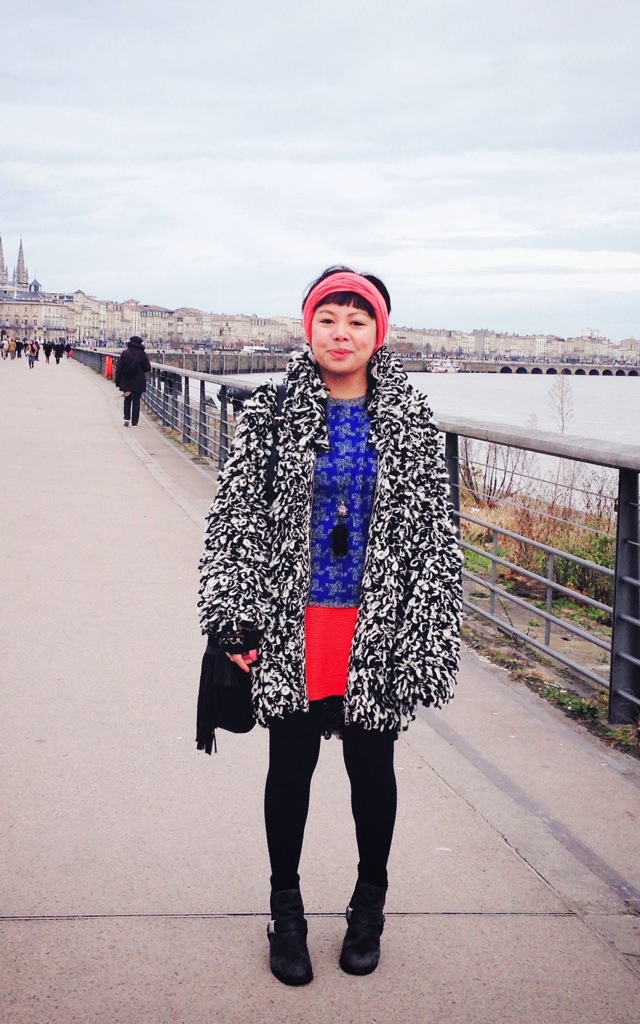 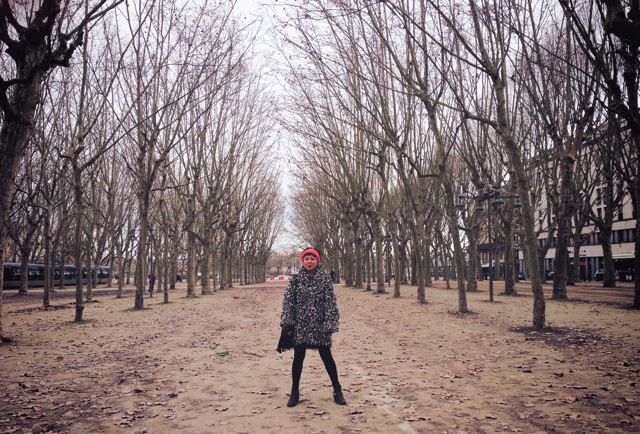 I just liked the look of these naked, leafless trees. And then ME! In hindsight I should’ve worn something more along the lines of.. neon yellow. 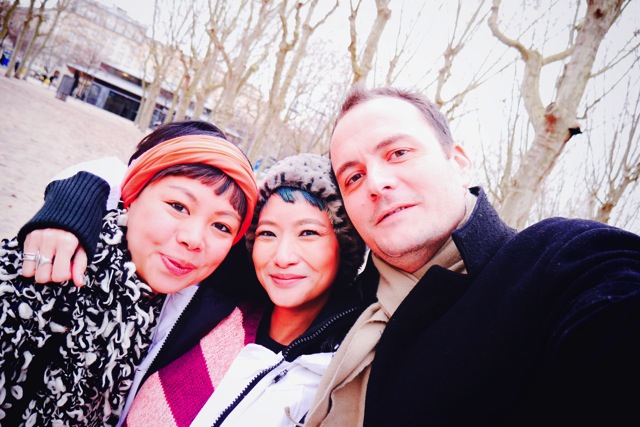 It was SO GOOD to see these two again! It’s always a funny/fun/crazy time think it’s cos we’re all so mad..

We took one day out of the week that we spent together to go out and have a wander around Bordeaux. Started with lunch at some brasserie which name I sadly don’t remember – but it was nothing super special so I thought it unnecessary.. haha 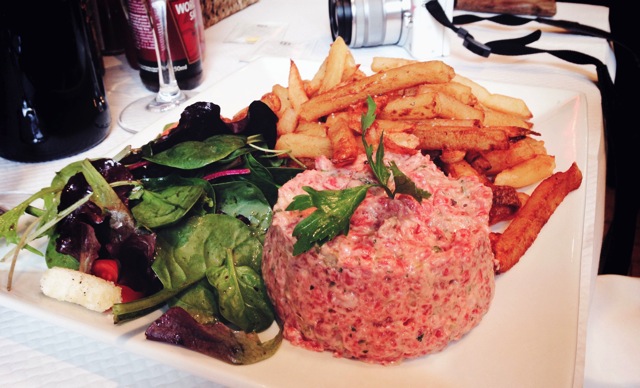 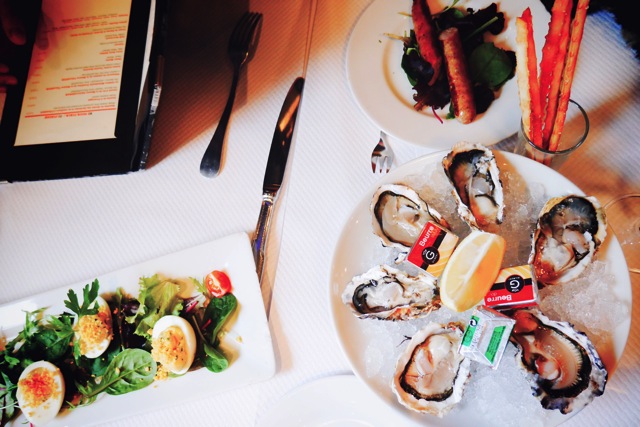 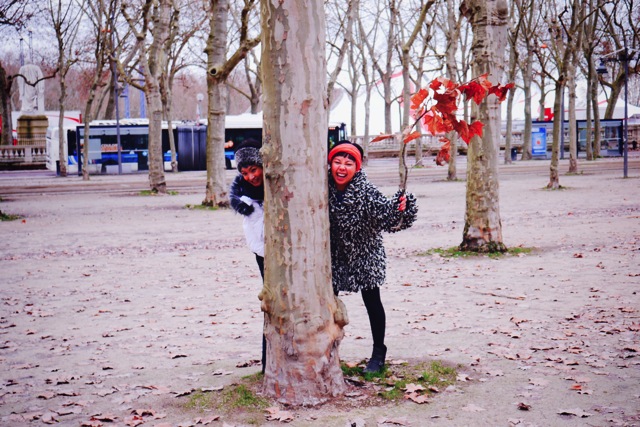 So, after lunch, when we went out to where all the naked trees were…. I found this tree branch with bright orange leaves still attached, lying lonely on the ground. Naturally, I befriended it and invited it to join us on our city stroll. 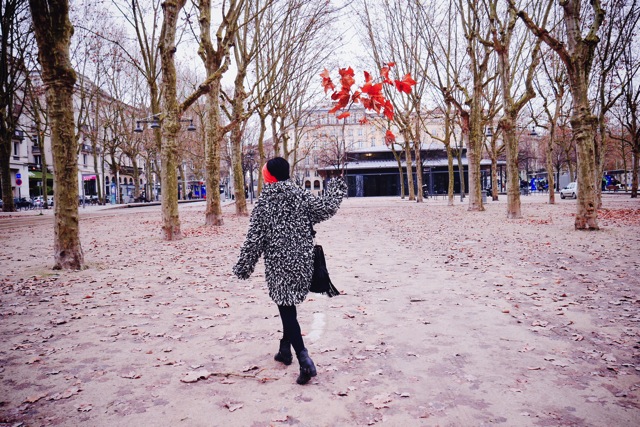 I introduced it to Joyce. She was receptive.

Unfortunately, Clem refused to be friends with an inanimate object. I had to chase him down so many streets with the branch, pestering him.

Clem said he was embarrassed to be seen with us. 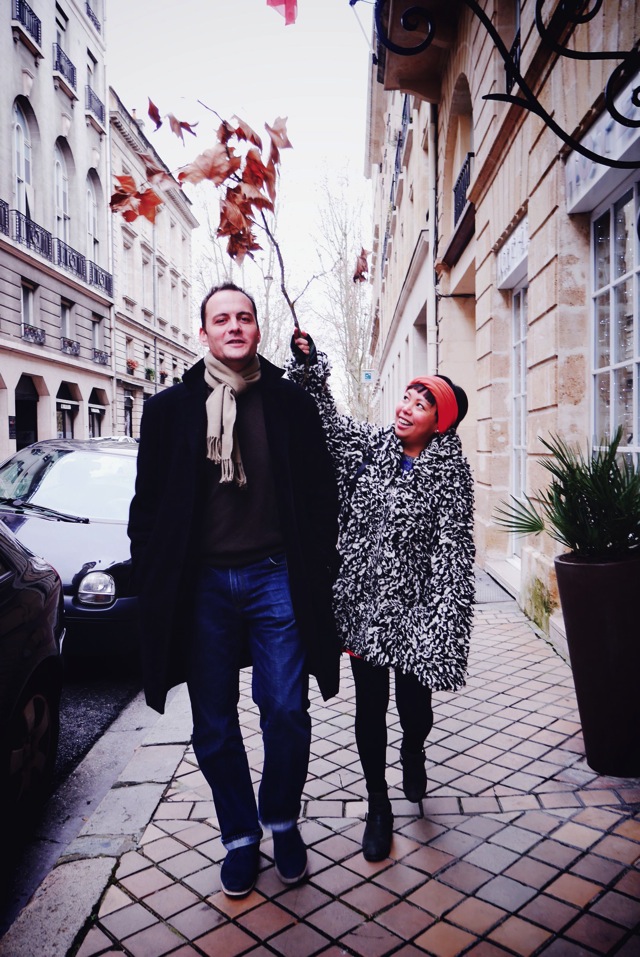 Eventually, with a LOT of annoying behaviour by Joyce and I, Clem relented and ACTUALLY SAID HELLO TO MY TREE BRANCH!!! HA ha hahahha

I pushed it by trying to make him say more, but I think that was his limit.. but it’s ok, we got the whole thing on video.. 🙂 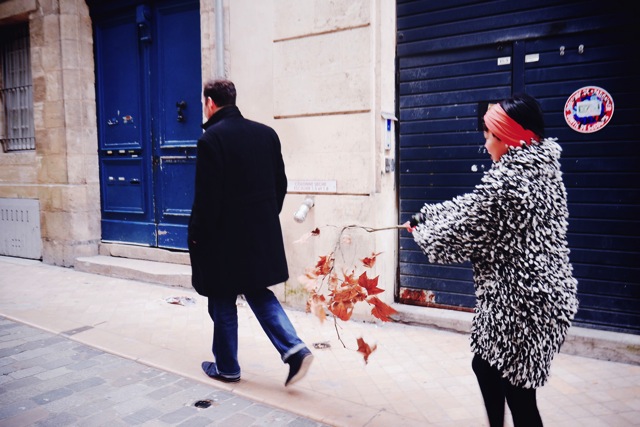 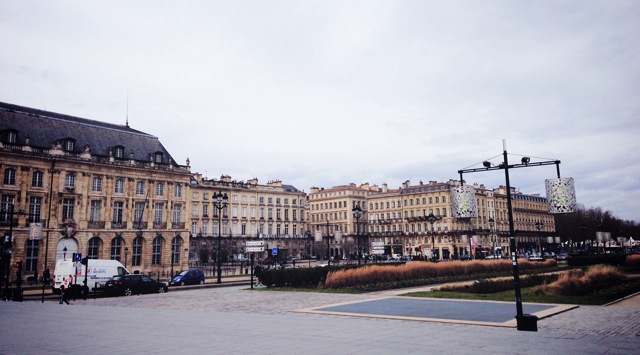 It was a rather grey gloomy day that afternoon. But the sunshine was in US!

We went to a couple of beautiful toy stores and I bought myself a plush.. banana. What else, right?

Saw this cool art installation near the church: 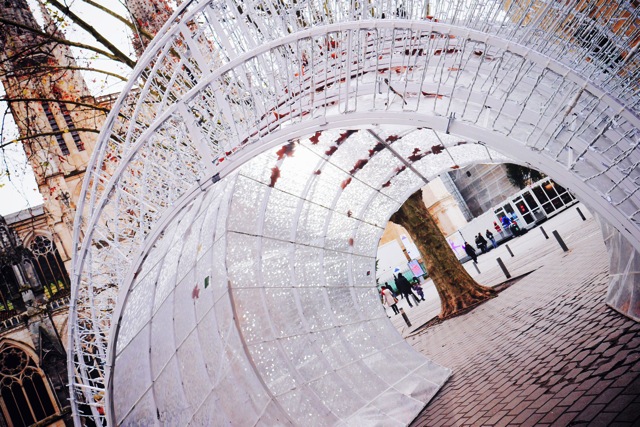 At first I thought WOW what a cool tunnel thingy.. that’s somewhat like a ball..

We went inside and took some photos 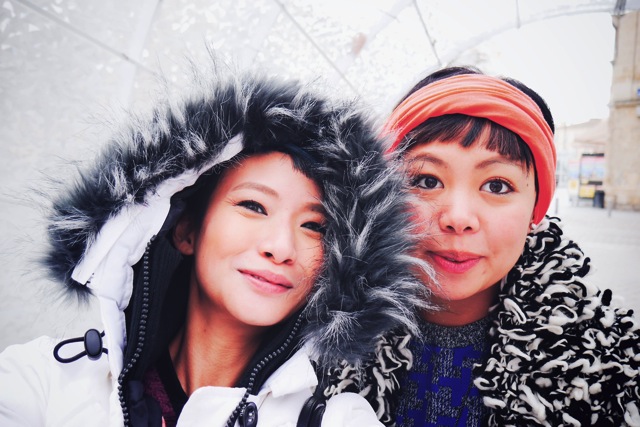 BUT THEN AT NIGHT! 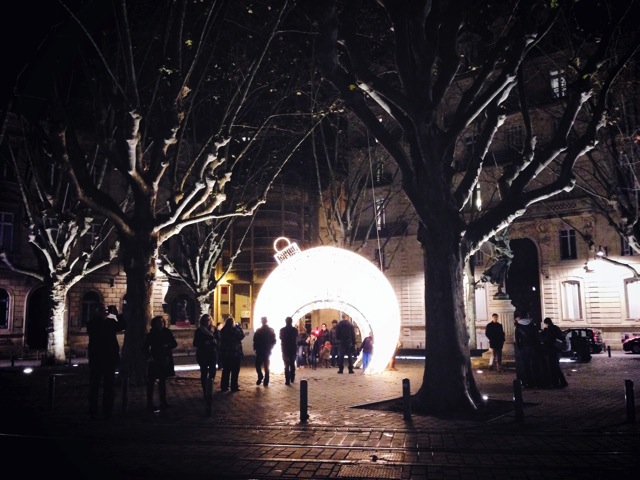 Isn’t it so cool! I hope to have something similar in my own garden. Umm someday. 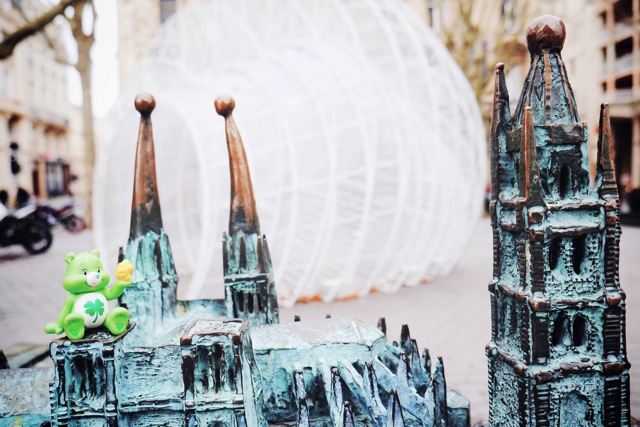 ^Joyce brought her Carebear out.

And here’s a little behind-the-scenes shot: 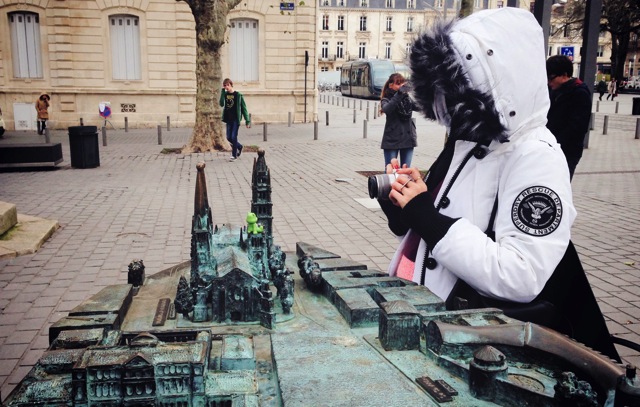 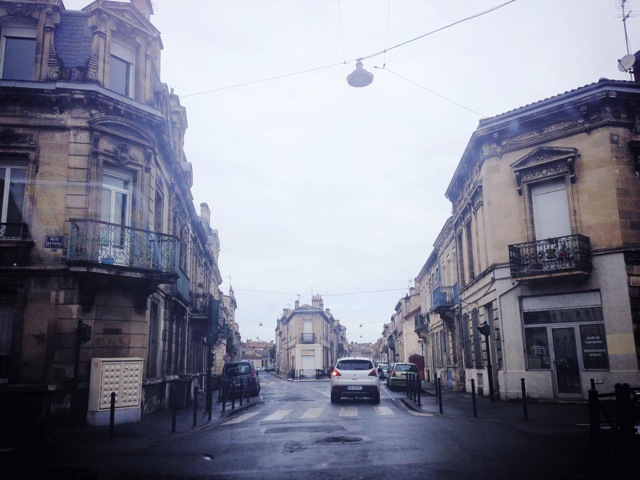 ^I thought there was a certain beauty in the monotonous colour palette that was seen in Bordeaux that day. Quiet, peaceful, and a little bit mysterious! A perfect setting for someone like me to come prancing about with a brightly dressed tree branch..

And oh yeah, I also learnt that you can buy a model of Picasso’s nose. My favourite is the watermelon one – seen on the bottom row, far right. 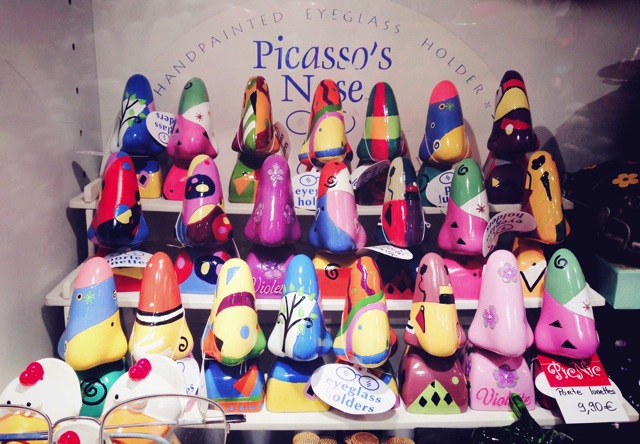 I like the idea of having a colourful Picasso’s nose in my handbag or pocket. That way I can pull it out at random times.

It’s a good way to meet people, I think.

While I can’t say that I ‘fell in love’ with Bordeaux – like I do with many places I go to – I did have a lot more fun than I anticipated! The people were fairly friendly.. there was even a night when we ended up at some random dude’s flat to share a few drinks.. but that’s a story for another day.

The city itself was also more vibrant than I imagined. Admittedly I didn’t spend too much time exploring it since most of the week was spent with Clem in the suburbs with his family and friends.

Wanna go to Bordeaux? Check Monarch for cheap flights from London! They’ve got a concise little guide to the city too.. !

Bordeaux sounds awesome and I love your friends (and the branch!)

You look so sweet, as usual 🙂 really great pics!